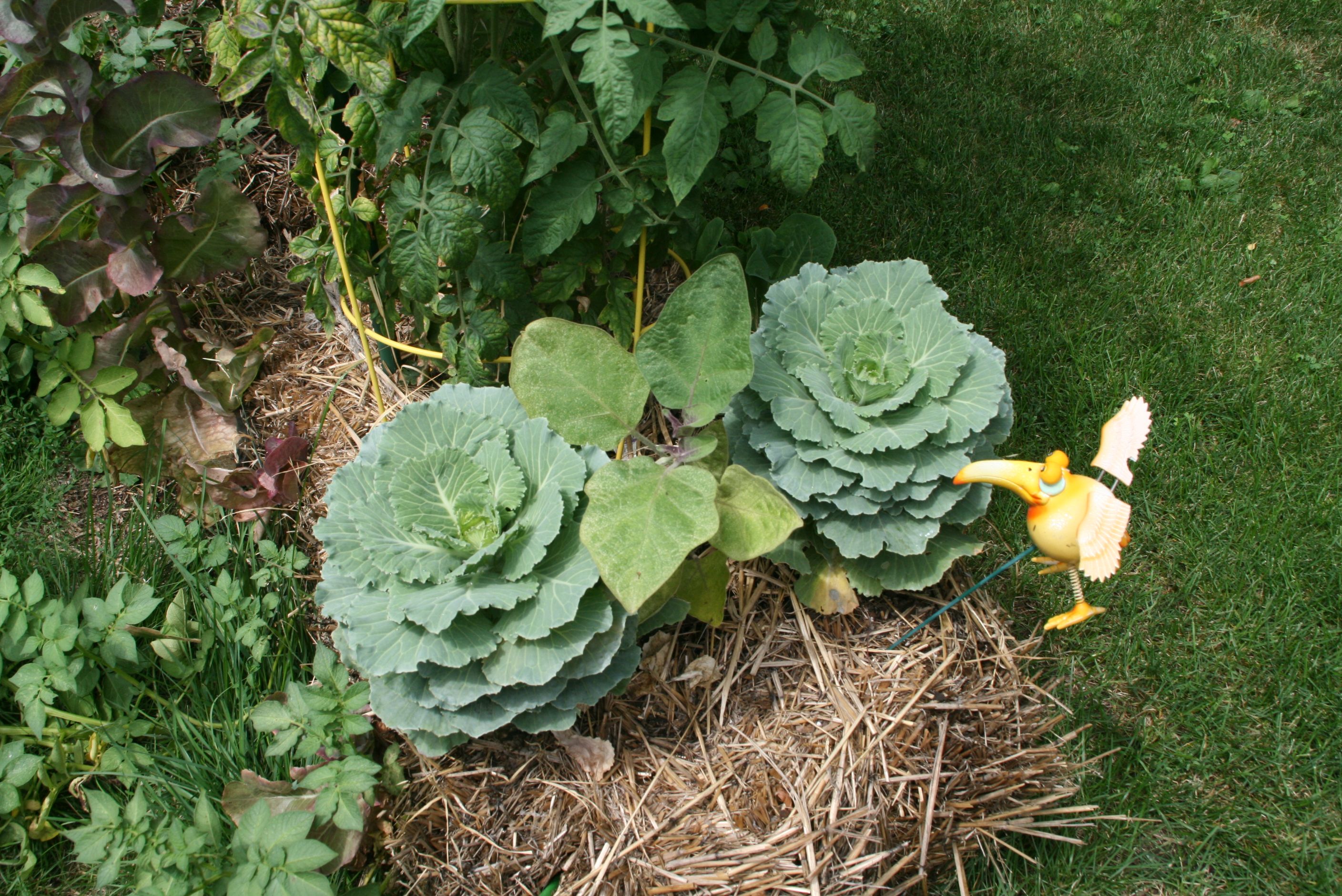 If you want to try your hand at straw bale gardening next spring, you might want to think about getting your order for bales into your local garden center now. Last spring, a number of garden centers were caught short by the sudden surge in popularity of straw bales as a growing medium. It’s the new thing with gardeners, and even my neighbors who wondered what crazy thing I was doing when I set up my first straw bales in three years ago are now planning to straw bale it next spring.

I’ve been using straw bales for three years, buying my 10 bales in mid-April and positioning them on a small sunny section of my mostly tree-shaded front yard, a supplement to my back, side and boulevard strip gardens. But, since the straw bales allow for layering – you can plant on top, on the sides and underneath – my ten bales added a huge amount of ‘land’ for growing my favorite vegetables.

The movement has been on the increase since Roseville horticulturist Joel Karsten started spreading the word through his books and seminars. In 2002, Karsten was listening to a rural radio show that featured a garden expert discussing an old but unique form of container gardening using straw bales. Inspired, he partnered with his father and the two of them set up 10 test plots with five bales each. Their experiment was wildly successful.

“They’re weed free, they retain moisture, are fertile, stable and light weight,” Karsten said. “They’re as good as potting soil, but a bale costs 35 cents a cubic foot. Potting soil costs $5 to $6 a cubic foot. You can plant two weeks early. The decaying bales create their own heat so plants that are covered will survive temperatures down to 20º.” If you have bad soil (or even just concrete and no soil) you can grow a vegetable garden. You don’t need to build raised beds.

Every gardening year is different and I learn a little more every year. From beginning to end, here’s my illustrated straw bale diary for 2013.

April 28 – It’s warm enough to wear shorts (or a kilt) when conditioning the bales, a fairly complicated system of fertilizing and watering over the course of two weeks. My husband David started the conditioning on the first warm day, but the good weather didn’t last long. 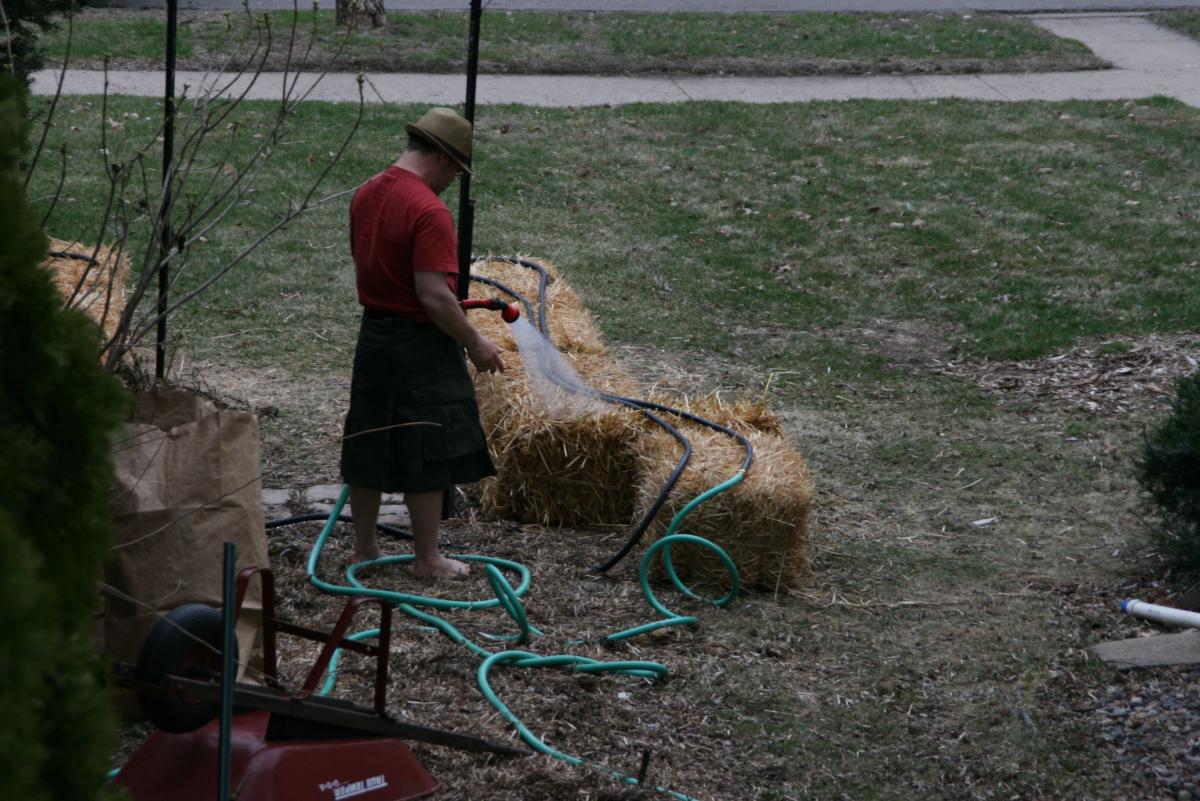 May 2 – It snowed. Of course. The bales aren’t bothered, but I am. The bales still need another 10 days of conditioning to be ready. 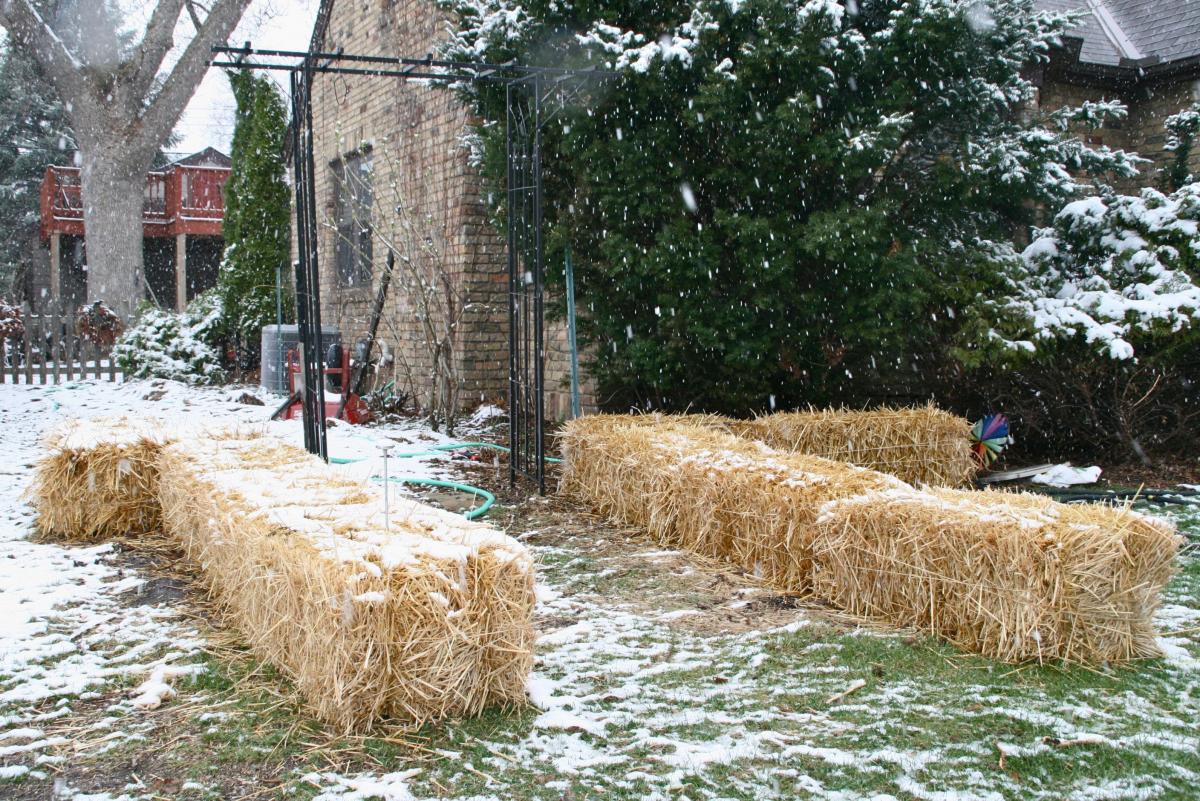 May 16 to 19 – It’s finally time to plant. I place a tomato plant in the center of each bale alongside a few eggplants and flowering kale. Salad greens go into the sides of the bales. Planting is easy. You take a trowel, make a hole in the bale, add a little potting soil and stick the plant in the hole. We lift up the bales a little and throw potato starts under them. 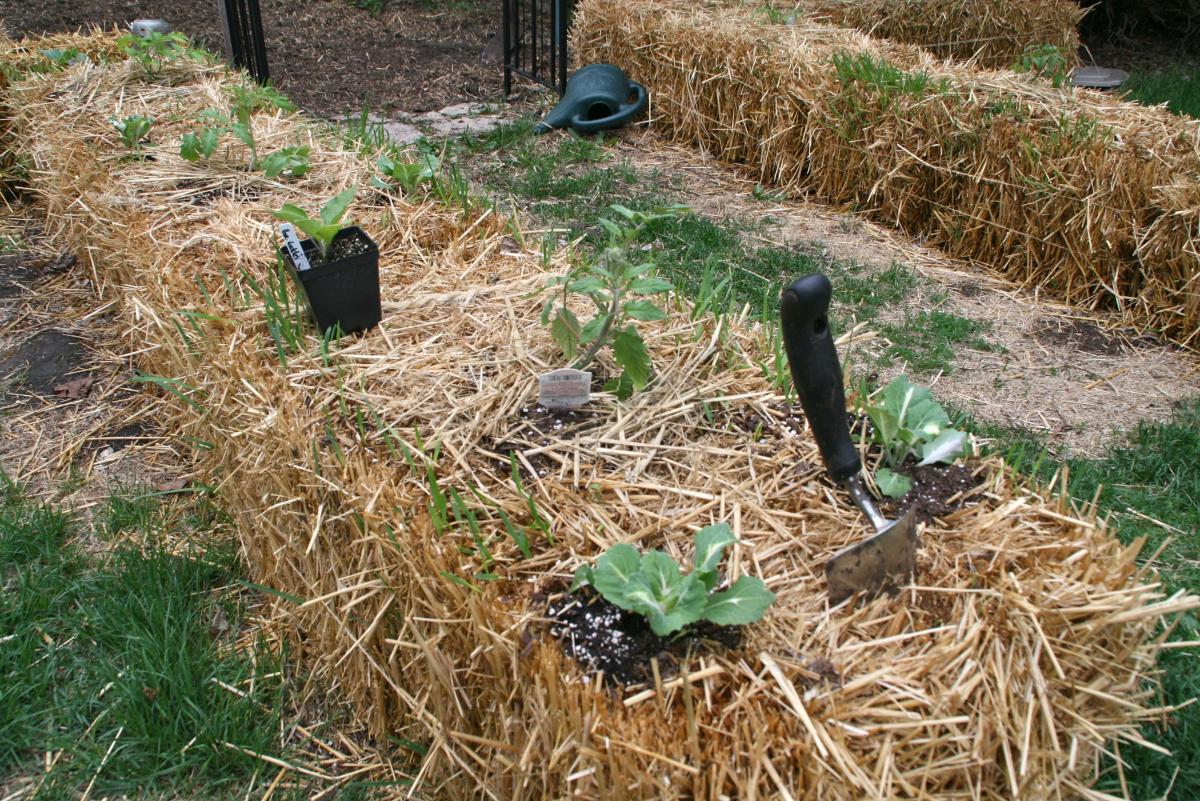 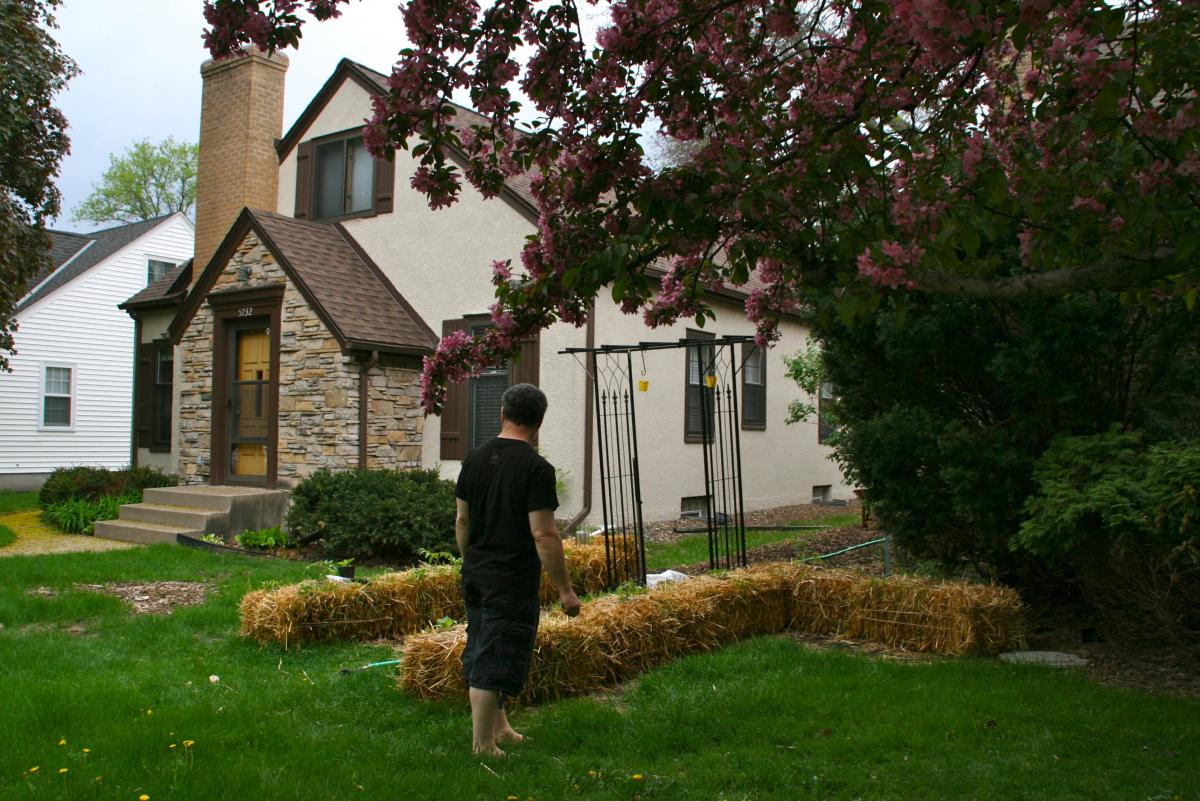 June 13 – The vegetables are doing well despite what looks like a crab grass growing on the bales. That’s not supposed to happen. Straw bales are supposed to be weed free. The rains have also caused mushrooms to sprout. Both of these are gone, without any treatment, within two weeks. 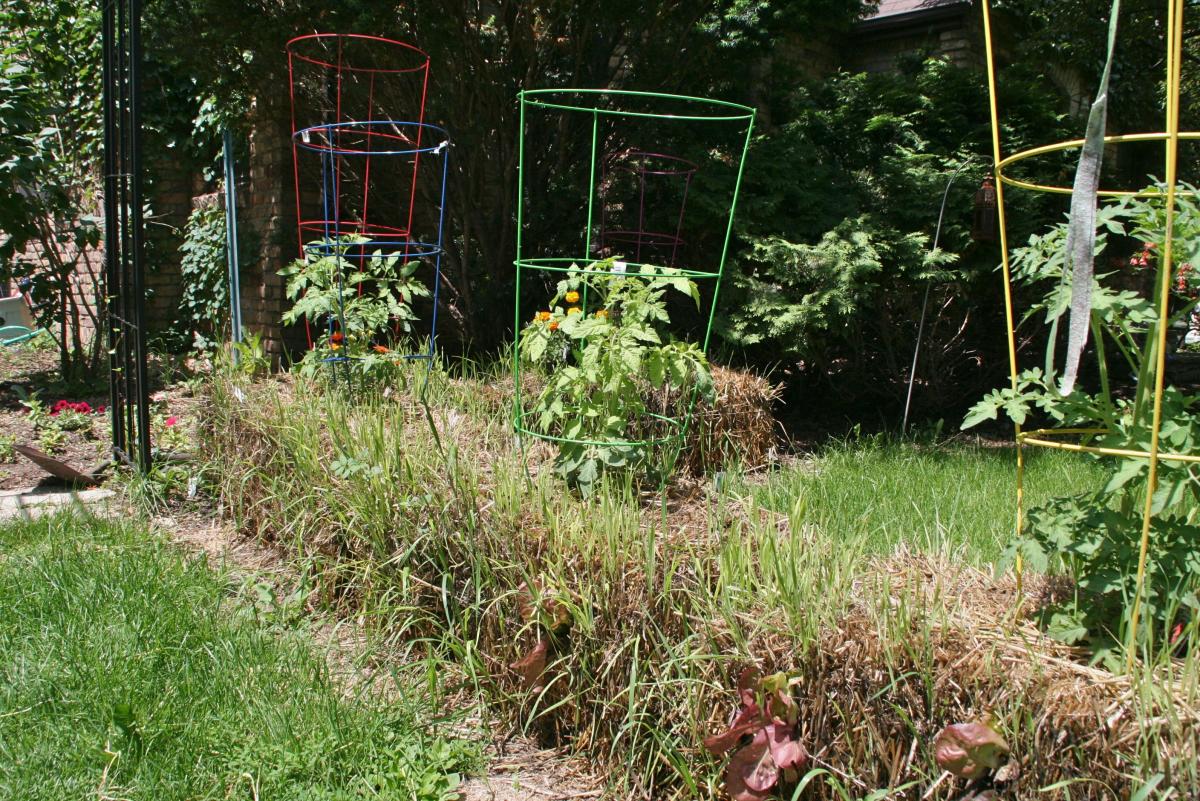 June 30 – The tomato plants have grown to more than 48 inches tall and are flowering. Green potato vines are pushing through the sides of the bales and soon overwhelm the salad greens. It’s getting too hot for salad greens to thrive, anyway. We eat them all. 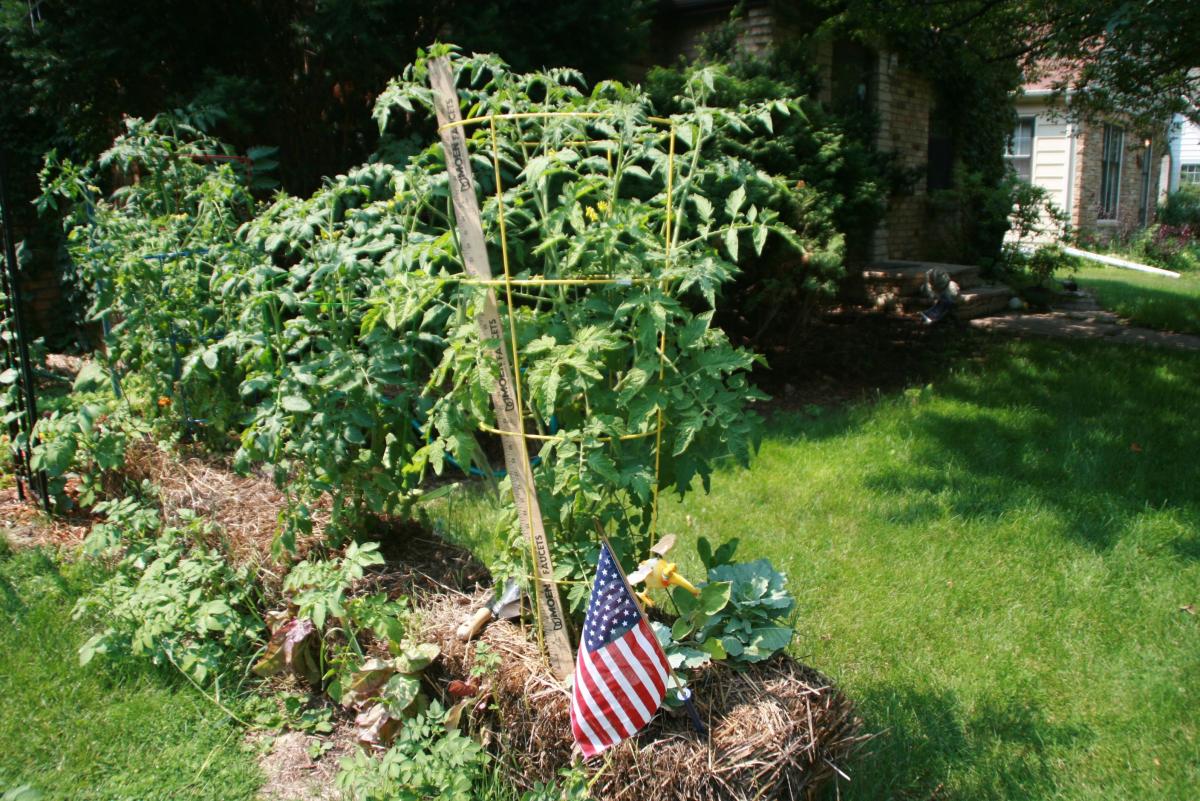 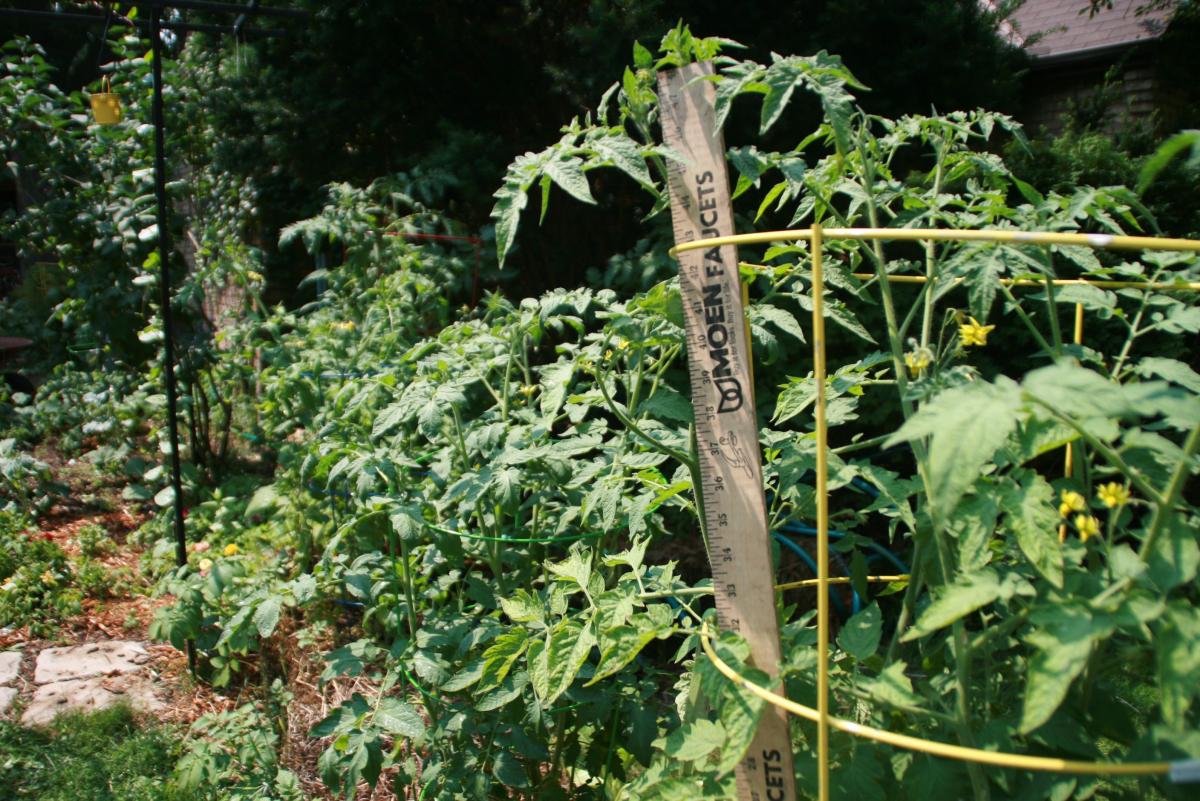 July 27 to August 1 – Large green tomatoes are showing up on every tomato plant except one, which for some unknown reason has died an unceremonious death. The kale is thriving but eggplants, though healthy, aren’t flowering. I’ve also noticed some tomato bottom rot on some ripe fruit. I’m off the garden center for calcium spray. It works. No more problems. 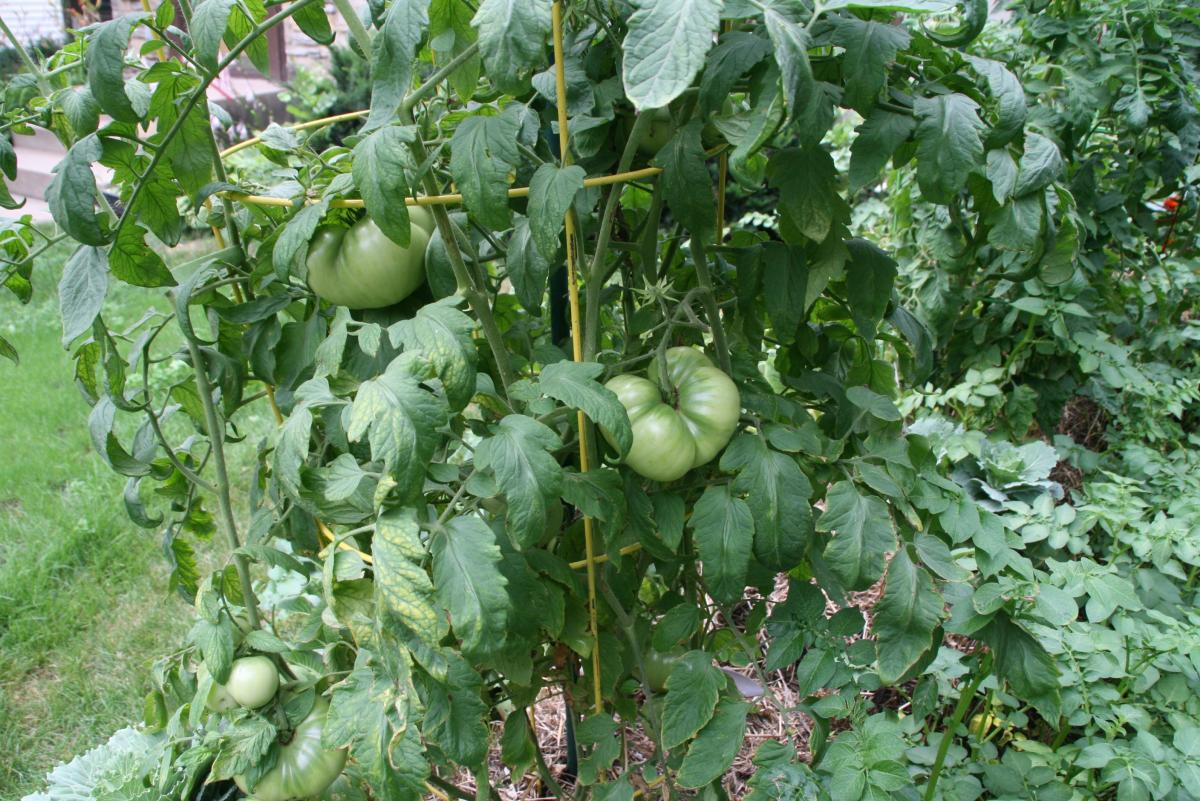 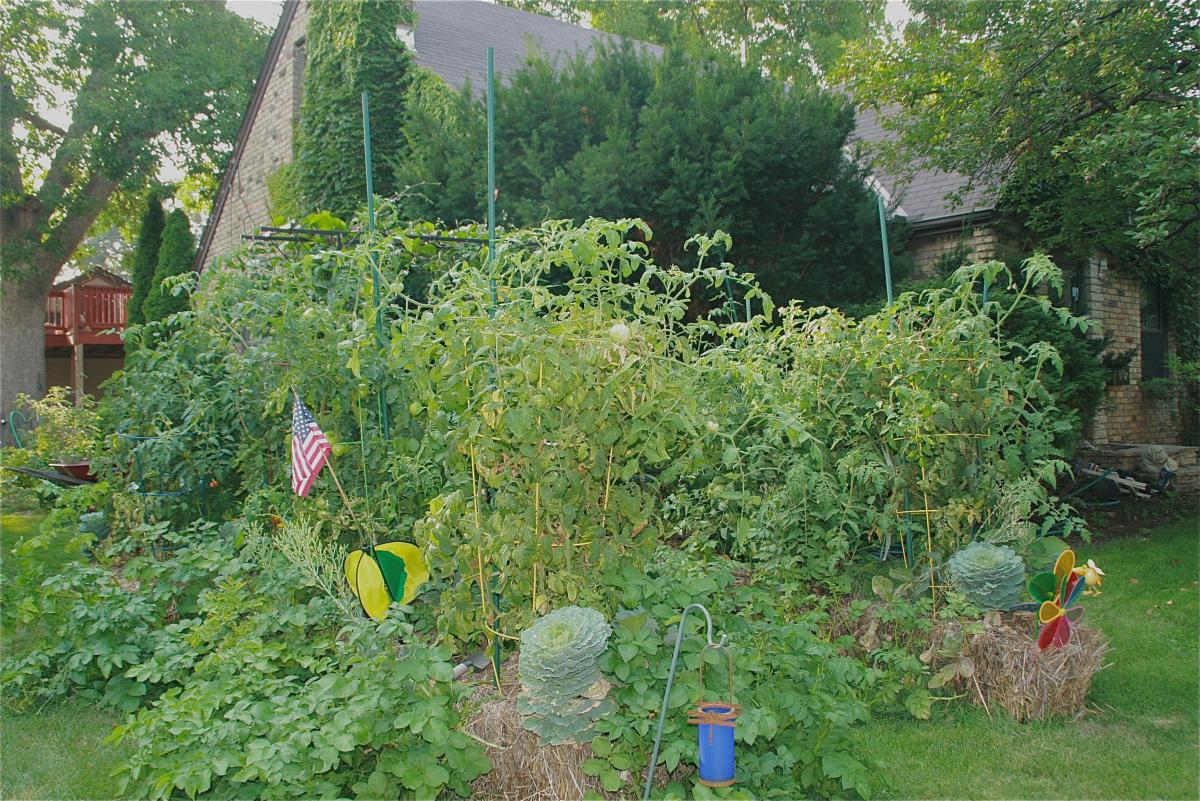 August 21 to September 2 – This might be my best year ever for tomatoes. We’re eating them three times a day, which makes us happy. Breakfast is half a bagel with cream cheese, slices of onion and a thick slice of tomato. Salads rule the day. You can’t get any better than a juicy red chopped tomato and some young kale with Greek seasoning and a drizzle of good olive oil. I have enough to cook up some green tomatoes, including my favorite Burmese green tomato salad and a green tomato casserole, which my vegetarian friends love. 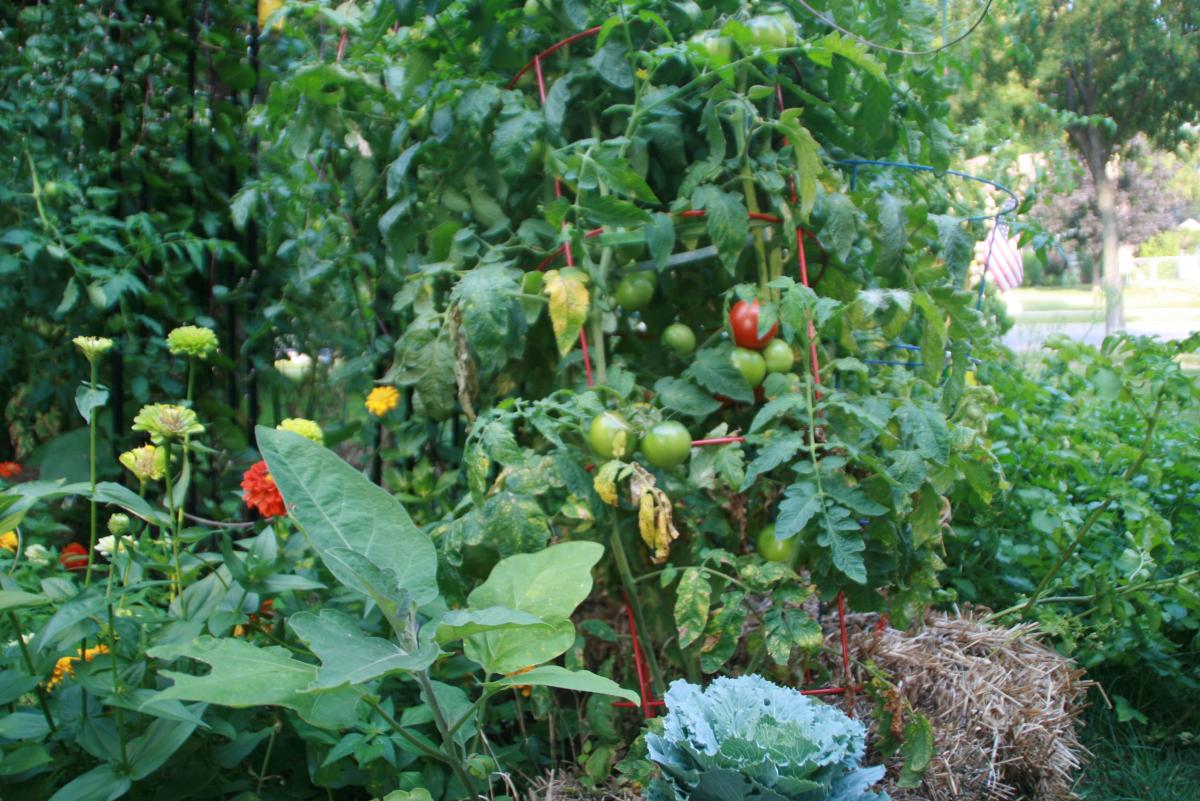 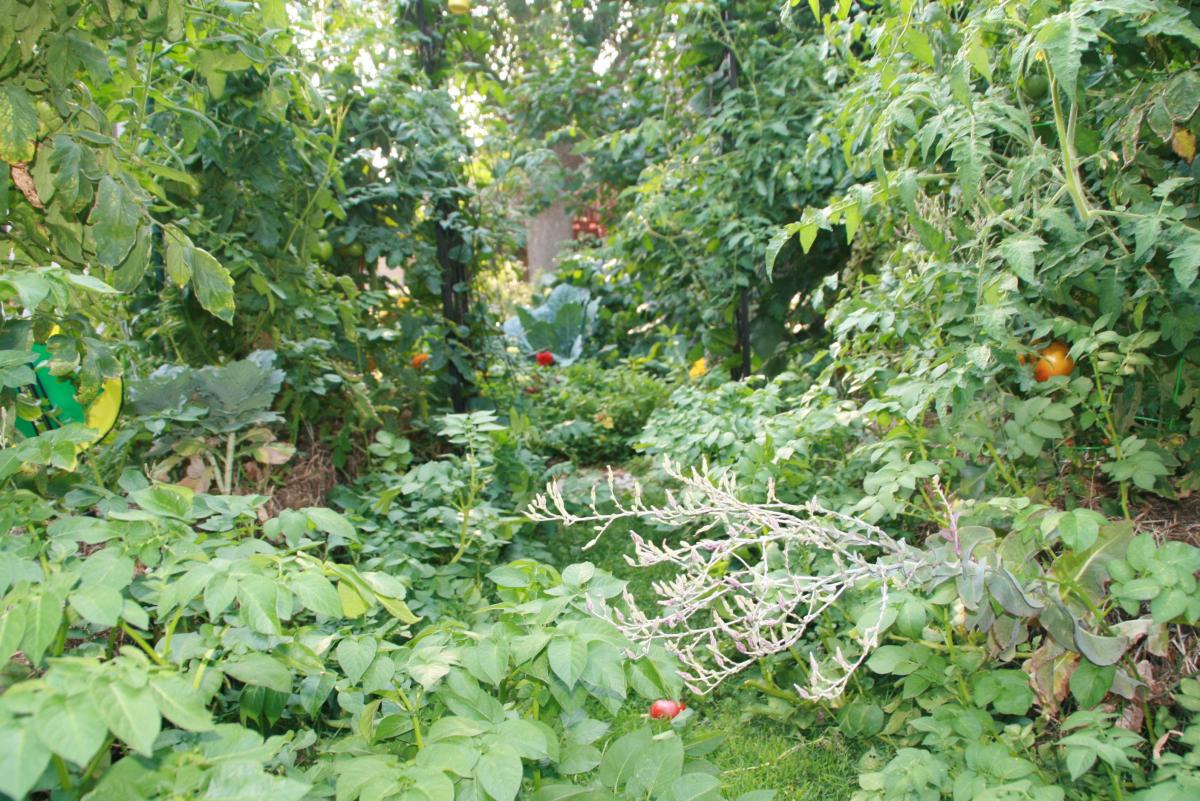 September 29 – The tomatoes continue to produce wonderful fruits but I see some plant damage, and some leaves are turning brown and dying. A local master gardener tells me that there’s probably some drift from someone in the neighborhood using lawn chemicals. Wash down the plants with the garden hose if I see one of those yard care trucks in the neighborhood, she said. You can’t overwater straw bales. 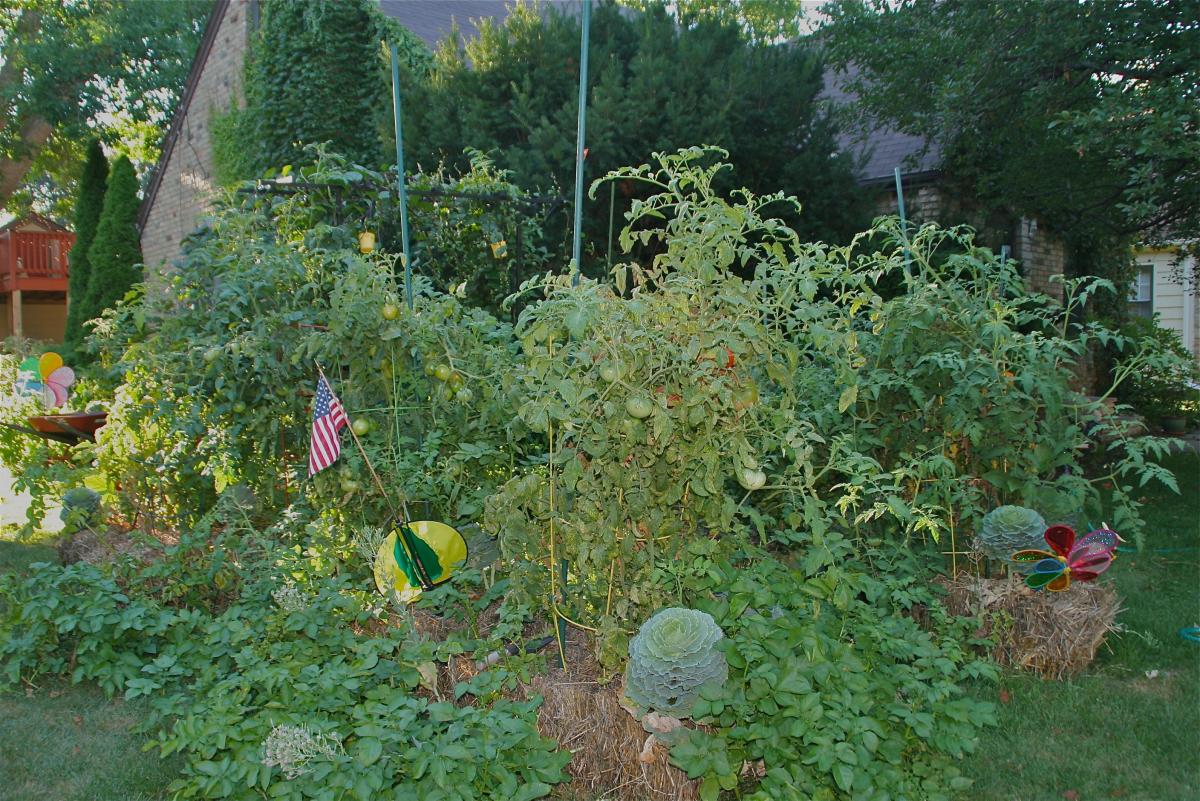 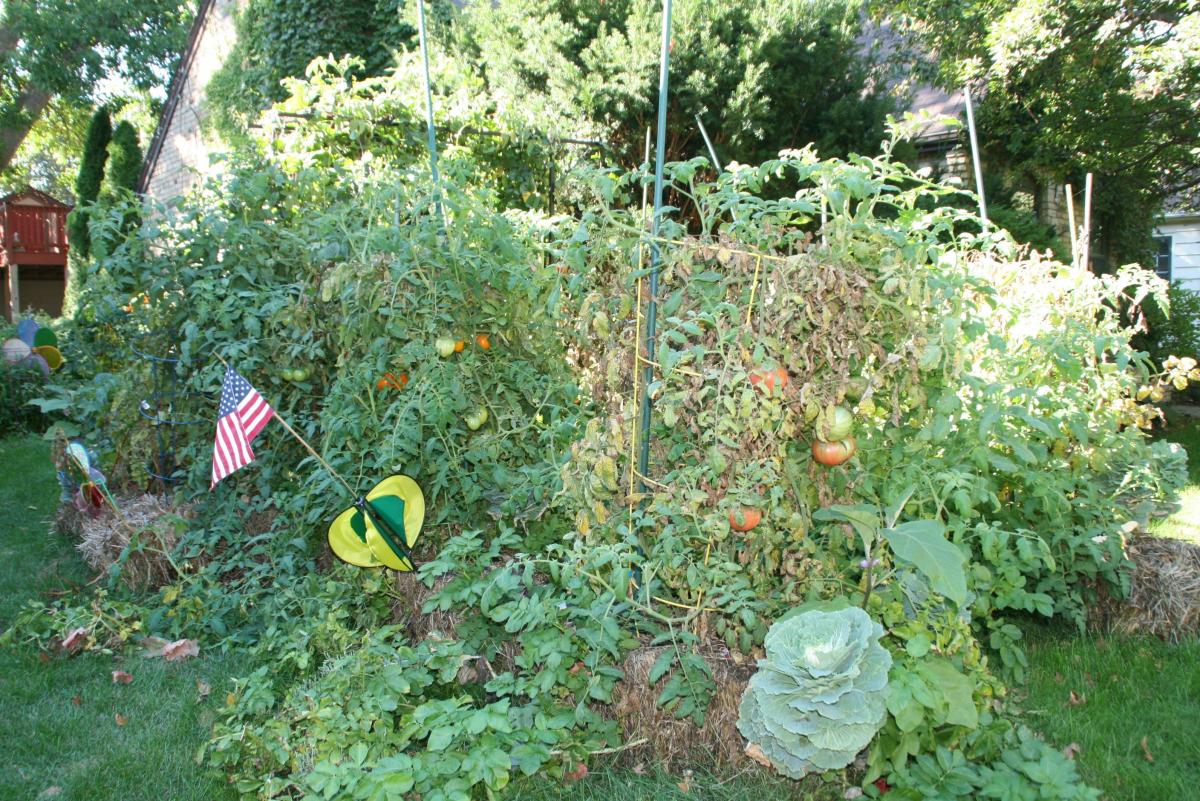 October 18 – Cold weather is expected. I cover them, knowing that the end is near. The eggplants still haven’t produced, except for one squirrel gnawed fruit. The squirrels have stolen tomatoes, taking a bite or two and then discarding them. I let them have some. There’s enough for everyone. 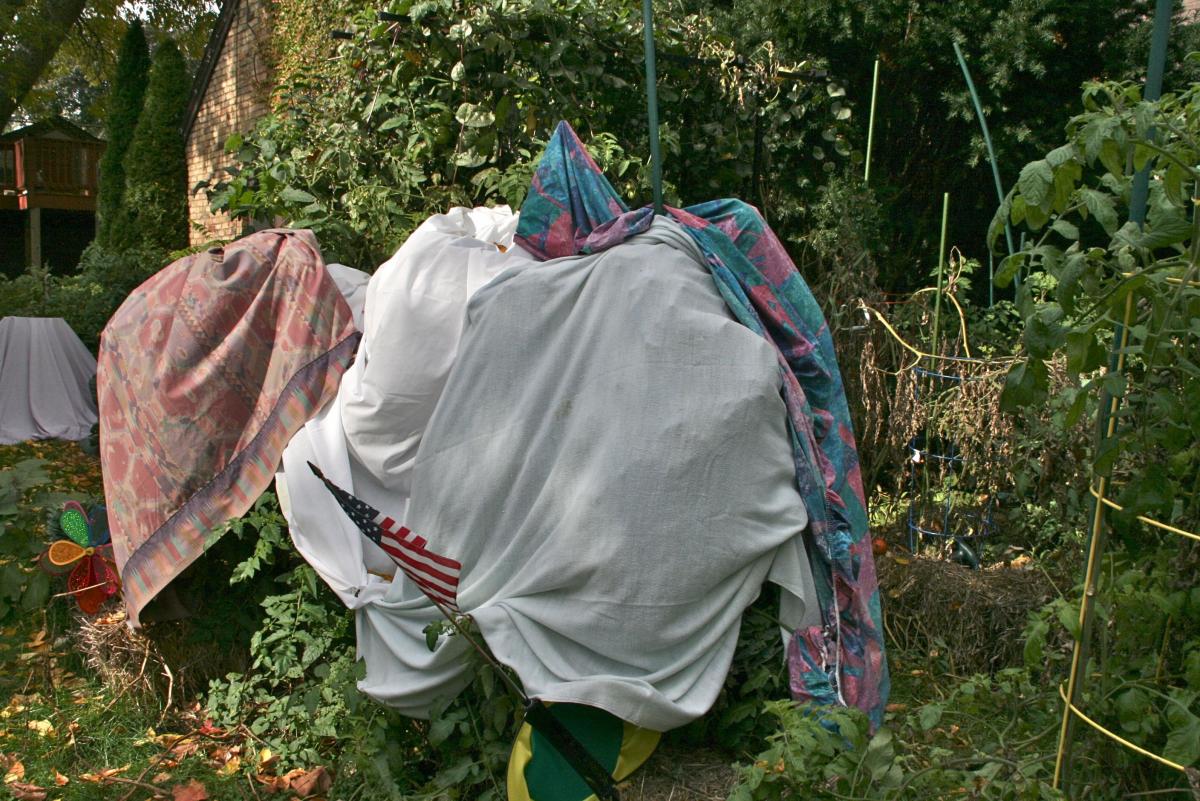 October 26 – The tomato plants have succumbed to a freeze and are ready to compost. The kale plants, sweeter after some chilly weather, continue to grow, but slowly. I begin to harvest the potatoes, tearing apart the bales, and find I’m getting more potatoes from one bale than I get from my 6’x7’ in-the-ground patch in the side garden, with the mud-grown potatoes on the left and one bale’s worth on the right. The bale-grown potatoes come out clean, not all muddy like those from the side yard. I’ll store them in brown paper bag, in a cool dark place and use as needed throughout the winter. The skeletal tomato plants are now part of the Halloween decoration and soon, they’ll be mulch and compost. It’s been a good summer. I’ll do this again next year. 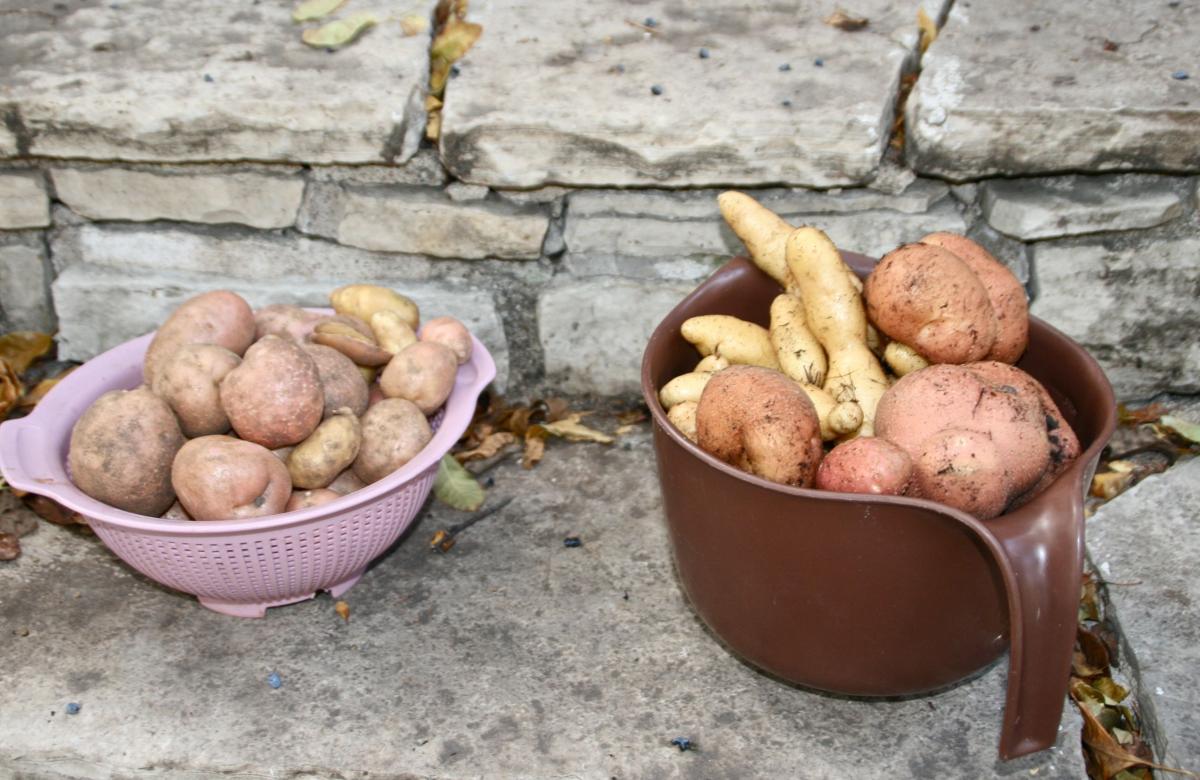 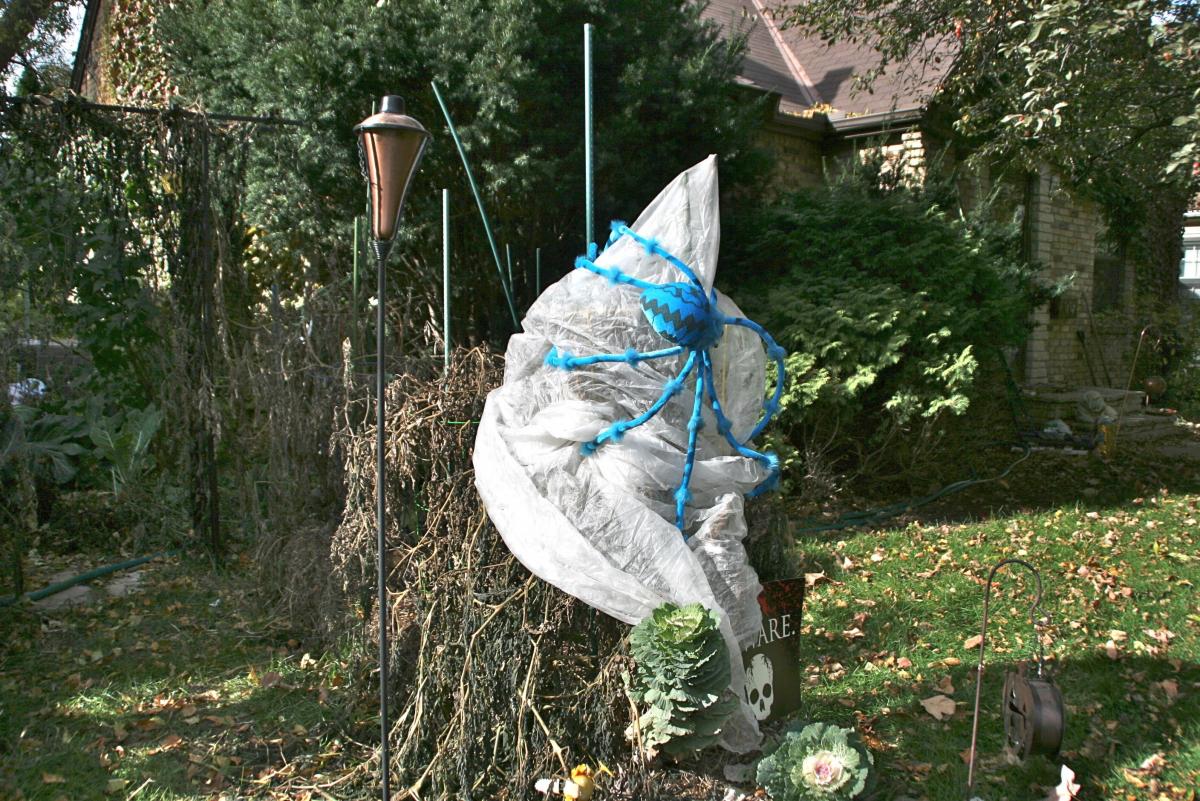