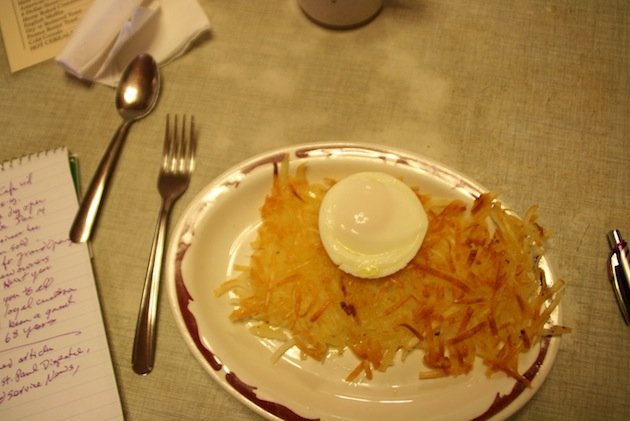 The handwritten announcement on a white board said it all. “Serlin’s Café will be closing. Our last day open will be Dec. 14. The business has been sold. Watch for grand opening with new owners next year. Thank you to all our loyal customers. It’s been a great 68 years”

Over the course of those years, the tiny 45-seat restaurant on Payne Ave., in St. Paul’s east side, became more than just a neighborhood café. It became a destination. Politicos – Hubert Humphrey, Jesse Ventura, Rudy Boschwitz – and even non-politicians like Frank Sinatra – stopped by to eat and schmooze. But most of the customers were regular people – podiatrists, wedding photographers, college professors, little kids, hockey players and retired seniors who’d come here with their parents when they were children.

A week before the final day, customers came for a final, memorial meal at the old Serlin’s Café. A few brought friends for their first visit, so they’ll know what they missed.
“I’ve been coming for 40 years,” said Linda Brandt, who’d brought her grandson Nicholas Verby in from Woodbury for his favorite waffles. “We knew the original owner, before Gary and Al took it over.”

As kids, the Halverson family lived in an apartment above the restaurant. Brothers Gary and Al Halverson started working at their stepfather’s café in 1965 and took it over in the mid-1990s.

In 2008 a ‘for sale’ sign appeared in the window. It took five years for an acceptable offer to be negotiated. The two had considered closing the business but decided to keep it open until it sold earlier this year.

Al Halverson, the restaurant’s main chef, is retiring. “I’ll do some fishing, be with the grand kids, maybe travel a little around the U.S. – maybe even overseas,” he said. His brother Gary, the pastry chef, plans to keep working. “I’m only 64. I might work for the new guys if they need help,” he said.

Candy Lyons is the Café’s one-person wait staff. She never stops moving, bringing hash browns, eggs, sandwiches and coffee from the kitchen into a restaurant filled with customers. She is always smiling. She actually calls her customers “Hon” and “Dear,” chatting with customers new and old. “Anyone want a little more coffee?” she asks the room.

Lyons plans to get another waitressing job when the café closes. “I have three teenagers I have to support,” she says. “I’ll probably end up with two jobs. All I’ve ever done is waitress and bartending work. I can’t sit still at an office. I’m not a sit-down person.”

Mike Joyce, who said he’d been coming to Serlin’s off and on for 50 years, was, at first, a a reluctant customer. “As a kid, we’d come after church,” he said. “I hated it. I wanted to go out and play.” Joyce moved to Chicago for a job, but when he moved back to the East Side, he became a regular, coming in at least once a month. “I hadn’t heard that they were closing,” he said. “I’m going to miss it. I don’t think these booths or the art on the walls has changed since I first came.”

“I’ve been coming here my whole life,” said Lisa Venticinque. “I love the breakfast, I love the soft scrambled eggs. We’d come here – my mom and we three kids would pile into a booth. When I grew up, sometimes I’d get the turkey dinner, the weekly special.”

She wonders what will happen to the customers she calls ‘the Wallflowers.’ “There are a lot of older gentlemen who come here all the time. Maybe they are widowers. What will they do when it’s gone?”

The new restaurant, purchased by restaurateurs and childhood friends Charles Cook and Eddie Wu, will be called Cook St. Paul and is expected to open some time in January. The building first needs to be brought up to code. The small, hard wooden booths (there are no tables) will be replaced and a new bathroom will be installed on the main floor.

The new owners, 30 years younger than the Halverson brothers, say they will continue Serlin’s made-from-scratch food tradition, including the iconic Thursday turkey dinners. They also promise to continue to give their Saturday morning customers the free mini-blueberry muffins as they stand in line. But, the new kitchen may add a Korean burger and other trendy menu items and will focus on locally sourced organic food.

Will menu items like cottage cheese with peaches, the peanut butter toast or the cinnamon French toast with two sausage patties still be available when Cook St. Paul opens next year? Will the scrambled eggs still be as fluffy? Will the old customers return? Or will it turn into another hipster hang out? Only time will tell.

“Closing Serlin’s is a bittersweet thing,” said Lyons. “I’ll talk with the new owners about coming back when the new cafe reopens.”

The tiny, hard wooden booths seemed charming to the loyal customers. Some are hoping to buy one for their rumpus rooms.

The menu specials and an announcment.

Serlin's was famous for their pies.

Somewhere in the restaurant's 68 years, it became more than a neighborhood restaurant. It became a destination.

Soup of the day; chicken noodle.

Lisa Venticinque laughs at one of waitress Candy Lyon's jokes.

Owners Al (in the middle) and Gary (in the hat) Halverson work the kitchen with Tom Bleise.

Candy Lyon has been waitressing at Serlin's for more than seven years.