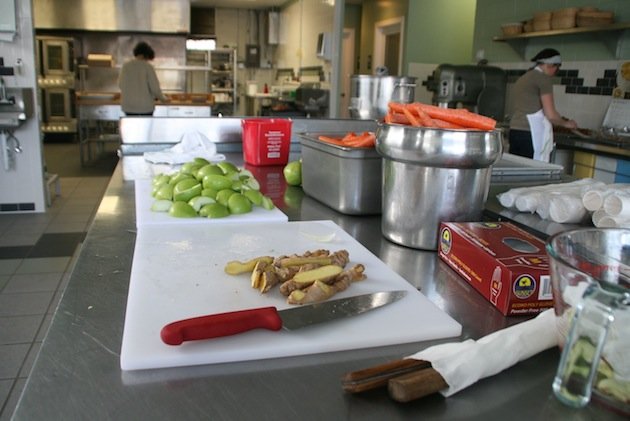 Let’s say that you’re a home cook with a killer recipe or two that you think the public would like. Your friends say you should make it and sell it in stores. But, there are rules, regulations and health codes. You can’t just cook something up in your home kitchen and take it to your local co-op or supermarket to sell. You need a commercial kitchen, expensive for a tiny start-up.

Journey Gosselin, a former analyst at Target, who spent time as a baker at the now closed Gelpe’s Old World Bakery (formerly of Uptown,) saw a need. His brainchild is the just-opened City Food Studio, drawing talented cooks and bakers to the South Minneapolis location from as far away as St. Paul and Rochester, all hoping to take their foodie skills to the big time. (Will there be a James Beard Award in the future?)

While there are other rent-by-the-hour commercial kitchens in the Twin Cities, City Food Studio is the only one in South Minneapolis and one of the few with space and times still available.

“We remolded the building,” Gosselin said. “It used to be a Mexican restaurant, but we added the green tile and glass block to bring in light. We took down the drop ceilings and now have 10 foot ceilings. We made sure that we were completely in compliance with restaurant code. We’re going to put art on the front, thanks to a grant for public art from Pillsbury House.”

Gosselin is a home cheese maker with plans to expand his own foodie dreams. His Underground Dairy will be located in a soon-to-be-built room in the basement of the building.

So far, the new kitchen is attracting mostly the makers of healthy, locally sourced and upscale food. Nearly a dozen of them were on hand to showcase their products at the Studio’s first open house on March 15. Soon, many will sell their products from the retail store front, open only on Tuesday evenings. It’s a mixed group, and not just culinarily. Some are private chefs, planning to deliver their meals or juices door to door. A few are artisans perfecting their products and others are ready to go as soon as they got their commercial licenses. Some aren’t looking for retail outlets. A handful are already selling to co-ops, supermarkets and coffee shops.

City Food Studio is part of the new artsy scene that’s springing up around the 3700 block of Chicago Ave. Their neighbors include the Chicago Avenue Fire Arts Center, with a class on making rosette molds, the Blue Ox Coffee shop, and new and soon-to-be opened shops and art galleries.

You can make your own rosette irons (to make rosette cookies) at the Chicago Ave. Fire Arts Center

Made with lots of butter and filled with marzipan and rum soaked raisins, stolen is a specialty of Bread Star Rising

City Food Studio has a number of stations, available pots and pans, stoves, ovens and other equipment.