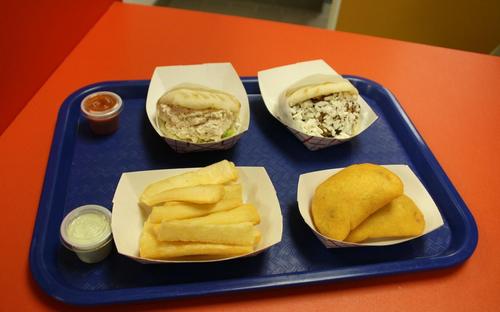 Even if you are looking for Teque Arepa, the tiny Eden Prairie Venezuelan sandwich shop, finding it might be hard. It’s hidden behind a row of trees in a nondescript strip mall on Flying Cloud Drive. Go there any time, and find a crowd of folks who have discovered the place and know that the food is worth the trip.

Venezuelan-style arepas are round flatbreads made from a special corn flour mixed with water and salt. They are thick, about the size of a hamburger bun with a flavor not unlike white cornbread but with a firmer texture. (The word “arepa” comes from a local Indian word “erepa” which means cornbread.) “Teque” refers to the capital city of the Venezuelan state of Miranda.

Owners Erwin Chacon and his wife Liddamir Hernandez – the cooking talent at the restaurant – stuff the arepas with your choice of 18 homemade fillings, serving around 180 of the sandwiches every day.

“We found a niche,” says Chacon. “My wife is a great cook and there is no other place serving Venezuelan food in the rest of the state. If you are Venezuelan and you want food from home, you come here.” They opened the restaurant a year and five months ago.

The biggest seller, says Chacon, is the pabellon – black beans with shredded beef, white cheese and sweet plantain slices. His own favorites are the pelas, a slightly spicy shredded beef with cheddar cheese and the reina peplada, shredded chicken with avocado and mayo.

The prices, $3.99 to $5.95 for the arepas, are competitive with the Subway sandwich place a couple of doors down, but Subway can’t compete for flavor.

Word about the cuisine is starting to get around, even among non-Venezuelans. Amanda Marek, who teaches junior high Spanish in Shakopee, learned about the restaurant from another teacher. Marek, in turn, brought another friend. “She talked it up,” said her friend. “It’s very good. It exceeded my expectations.”

Right now, family members staff the restaurant, keeping it open seven days a week, from 11:00 am until 7:00 pm, except on Sunday, when closing time is 3:00 pm. The restaurant is the busiest at lunch. 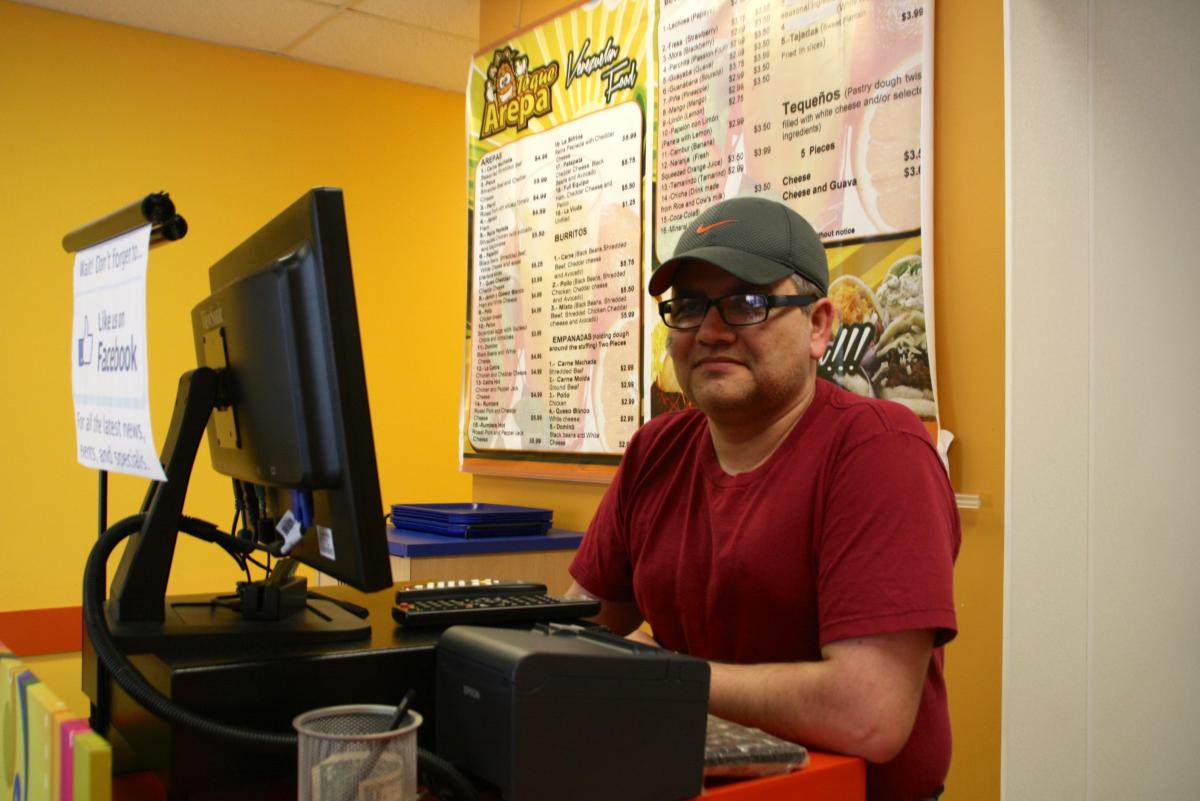 Teque Arepa’s owner, Erwin Chacon, is serious about the restaurant business. His wife Liddamir Hernandez, “the talent behind the kitchen,” didn’t want to be photographed.

“A place like this in Venezuela would be open 24-hours a day,” Chacon says. “They’d get most of their customers coming in late at night. At midnight, the place would be full. People eat food like this every day.”

The couple arrived in Minnesota in 2004. “I came for the weather,” he joked. In Venezuela, Chacon was a Metropolitan police helicopter pilot. Hernandez received a degree in tourism business administration, hoping to someday open a restaurant featuring the cuisines of South America and inventing recipes.

Chacon says that some of his customers suggest they start to Americanize some of their sandwiches. “I don’t want to do that,” he says. “Maybe if there were more Venezuelan restaurants in Minnesota, but if there are, I’ll let them do it. I want to stay traditional. Someone suggested peanut and jelly arepas, but if I sold that, people would think we ate that back home.”

Chacon says he hopes to soon expand the menu and hire more staff. “We want to serve complete dinners – roast pork or chicken with sides like black beans, salads, veggies and white rice. We’ll have cassava, friend and steamed, pasta and maybe cazón, a type of white fish.”

“We probably won’t add more tables inside yet,” he says. “We do mostly take-out business but in the summer, we put tables outside for the people who like the heat and the mosquitoes.”

This is a restaurant worth seeking out. Don’t be deterred by the far-flung location. I would never have known about Teque Arepa it if my elderly bulldog’s cardiologist hadn’t been located in the same strip mall. Now that I know, I’ve gone back a few times. You should go there, too and bring your friends. The food is a bit of an adventure but not so much that even those who are afraid of trying something new won’t like it.

Teque Arepa isn’t hip or trendy but the food there is really good. Look for it at 7733 Flying Cloud Dr., Eden Prairie.

Note: While Tegue Arepa is the Twin Cities’ only Venzuelan restaurant, some recently opened restaurants, bars and food trucks do serve other countries’ versions of arepa (more like griddle cakes and less like bread), notably Hola Arepa in Minneapolis.

Lunch for two: shredded chicken and black bean and cheese arepas, with fried yucca and an order of empanadas.

A chicken arepa with empanadas and a milkshake. Garlic sauce on the side.

There is seating for only 20 but the take-out business is thriving.