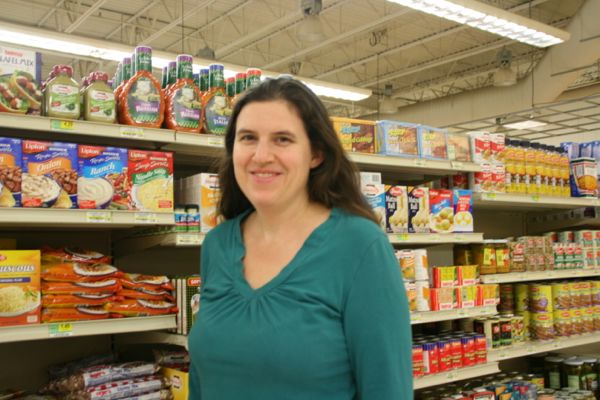 Sara Cooper, owner of Cooper's Foods at the kosher section of her market. (Photos by Stephanie Fox)

The rumors circulating among grocery store owners and observant Jews that Twin Cities Poultry had gone out of business turned out to be true. As the only kosher food distributor in the upper Midwest, their closing has left grocery stores like Cooper’s SuperValu Foods in St. Paul scrambling to find ways to fill the shelves for their customers who keep kosher.

In late October, owner Sara Cooper had noticed that Twin Cities Poultry has stopped delivering products to her store. “We had a salesman from there tell us that we’d start getting product again and then we didn’t hear anything after that,” she said. The company’s phones are not working but there is, so far, no record of a bankruptcy.

To find new sources for kosher food, Cooper headed off to Secaucus, NJ with Sima Zeilingold, wife of Rabbi Asher Zeilingold of Adath Israel Orthodox synagogue in St. Paul, to attend KosherFest 2012, the world’s largest kosher certified food and beverage trade show. “Sima knew a lot of people and could explain if there was something I didn’t know,” Cooper said.

The trip was mostly successful. Cooper talked to manufacturers and distributors and this week she expects the shelves of packaged goods and other kosher items to begin fill up again. The store had already made arrangements to get kosher meat from a packing plant in Iowa and milk from a source in Wisconsin. Now specialty kosher products will be shipped to St. Paul from New York. One major supplier will be Manischewitz, a leading kosher brand, bur Cooper is looking into others as well.

Cooper expressed frustration with the business style of some of the wholesale companies she had contacted. “They’re not forthcoming when we ask them questions about their pricing. Their attitude is ‘try us and see.’ We had to talk to other retailers to get an idea of their prices. I’m having to go on what others tell me, but it’s hard to know what’s good for our customers.”

While Cooper estimates that the kosher section of her store brings in only about 10 percent of revenue, she says that customers come for the kosher section and then buy other products. “We have loyal customers,” she said. “People drive here from Wisconsin or from Rochester. It’s tough if we don’t have the foods they want. People are calling, asking when we’d have their favorite things again.” 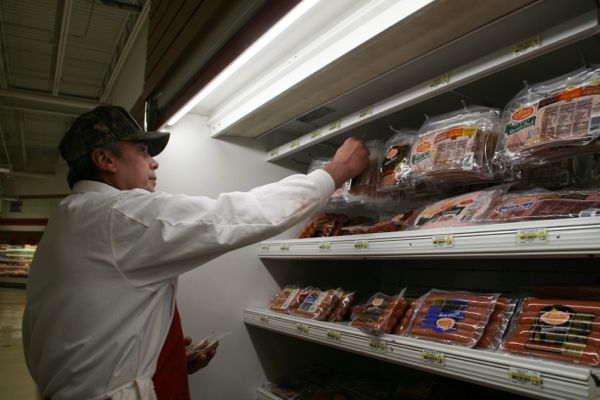 Customer Jonathan Gewirtz now uses Cooper’s as his main source for groceries, said was happy to hear that he’ll soon be able to buy his favorite kosher products. Gewirtz has been a customer at Cooper’s for five or six years he said, ever since the St. Paul kosher market, L’Chaim, closed.

“I appreciate that it’s reasonably priced here,” he said. “It’s near the Jewish Community Center, so it’s convenient. I’d like to see a few more specialty products, like a kosher white wine vinegar, but it’s OK. I like Cooper’s.”

Cooper’s isn’t the only store with a dedicated kosher section, but they are few are far between. Cooper made the decision to have a kosher section when L’Chaim went out of business. When the Minneapolis kosher store, Fishman’s, closed, the St. Louis Park Byerly’s stepped in to fill the void. But, Twin Cities Poultry’s demise has affected them, too. “My staff went to Byerly’s and they didn’t have a lot to sell, either,” Cooper said.

Having a new distributor means that Cooper’s staff has to get used to new ordering methods and a less reliable supply system. “The lead times are different,” said meat cutter Jerry Mans. “We now have to order a week ahead or sometimes, eight or nine days ahead. If they short you, then you have to wait another week. It’s also harder to get specialty items. But we’ll get used to it.”

Cooper’s Foods with a kosher foods section is located at 633 West 7th St. in St. Paul in the Sibley Plaza Shopping Center.