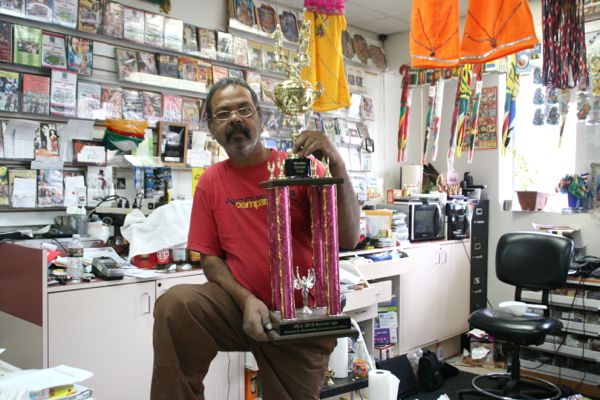 If you can’t make it to the West Indies this winter and are craving Caribbean food, just head up Lyndale Avenue to Guy-Am West Indian Groceries & Videos in the Camden neighborhood in North Minneapolis. Guy-Am is one of those old-school ethnic grocery stores with narrow aisles and shelves crowded with a jumble of interesting ingredients for cooking adventures.

“Customers used to go to New York or Canada to get these foods,” says owner Sookdeo (Son-Son) Somaiah. “Now they can come here. We’ve got things that people need that they can’t get at Cub or Rainbow.”

Somaiah, who is from Guyana, opened the store 15 years ago. He says opening his store was his part of the American dream. “It feels like yesterday I left to come to America. This is where I want to be.” 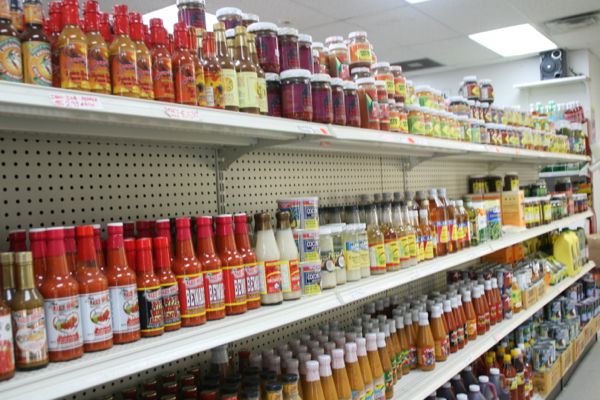 You can’t have Caribbean food without some hot sauce.

A lot of the items in the store are canned or bottled, including the popular jerk sauces and seasonings. “People like the all-purpose chicken and fish seasonings,” he says, referring to the mixes of garlic, turmeric, cumin, oregano and the indigenous Jamaican pimento berries, also known as allspice. There are curries, at least one from every country, reflecting the area’s Indian influences. The omnipresent pepper sauces start at fiery and go up the Scoville scale from there.

Ackee is the main ingredient in Jamaica’s national dish, ackee and salt fish.

Ackee, the fruit of the Blighia sapida tree, originally a native of Africa, is available in cans. It’s the major ingredient in the beloved national dish of Jamaica, ackee and salt fish. Canned callaloo (the green part of amaranth) makes another classic, salt fish and callaloo. The salt fish is in the freezer section. 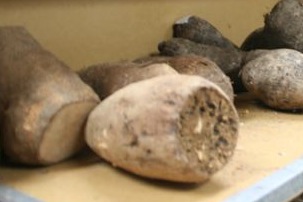 Inside these tubers is a beautiful bright yellow and delicious flesh which some credit with turning Jamaican Usain Bolt into an Olympic Gold metal winner.

You can pick up fresh yellow yams, the highly nutritious tubers that Olympic runner-deity Usain Bolt’s father claimed powered his son to athletic fame. These are real yams, not sweet potatoes. Cut open one of these hairy-looking tubers to find beautiful bright yellow flesh that’s popular in island soups and stews. 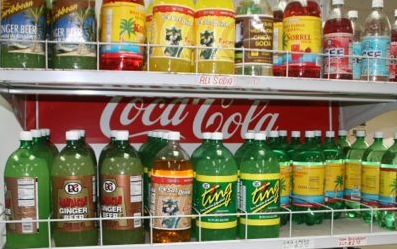 The store also sells a variety of bright tropical soft drinks and frozen plastic bottles of coconut water, right out of the coconuts. There’s no sugar added (with sugar, it become coconut juice, and entirely different beverage.) 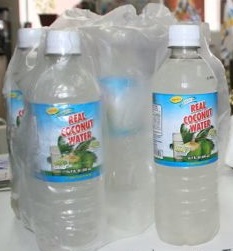 You can find coconut water in upscale supermarkets packaged in adult juice boxes, sold at twice the price, but here the coconut water is fresh frozen. Once thawed, the contents might ferment if left in unopened bottles in the back of a fridge, turning into a fizzy and quite possible slightly alcoholic product.

Or, if you prefer, shake up some Coconut Water Punch, a cocktail from Somaiah’s native country of Guyana. A couple of Guyanan websites give the recipe; chill coconut water and flavor with gin, “to taste.” Somaiah says he likes his with vodka. (I tried them and can recommend both.)

Guy-Am is located at 4539 Lyndale Ave. N. in Minneapolis. Most of the store’s customers are from the Caribbean, but if you’re not and you have questions about anything for sale, ask for Son-Son. If he’s not in the store and the door is locked, check around back at Guy-Am Auto Repair and U-Haul Rental. He fixes cars, too.

More on African food at Foods of Africa: Adom African market offers a taste of Ghana  and Shopping for Kenkey and Egusi in Minneapolis. Or go to Global Groceries for collection of stories on international groceries in the Twin Cities.