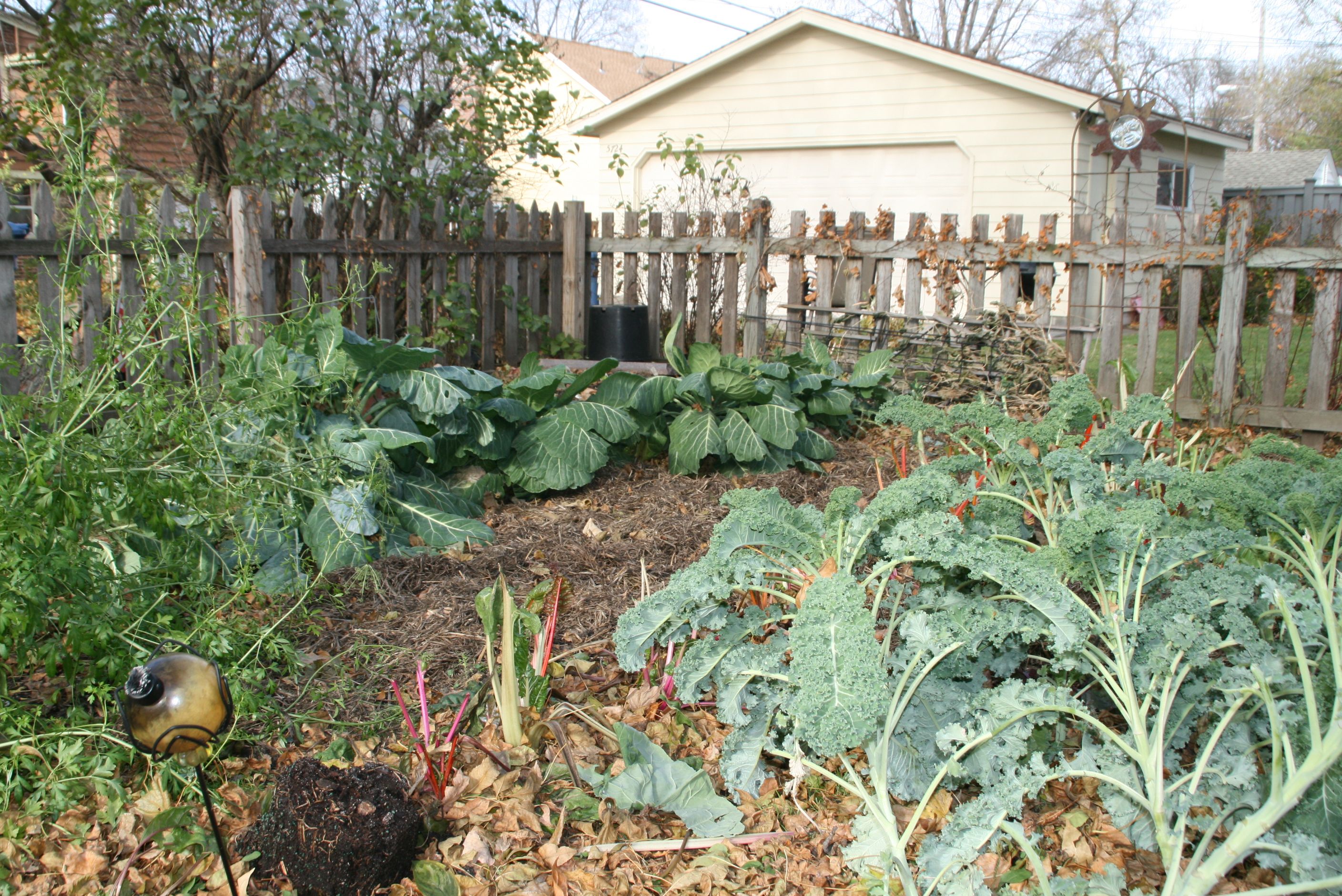 Some greens are hardy and stand up to the cold weather, much like Minnesotans, but it is almost the end of the growing season. This week I am putting my garden to bed for the winter, at least most of it.

There’s still a lot of work to be done. I’m pulling up plants for the compost pile, spreading the straw to be rototilled into the soil next spring and I’m harvesting and processing the last of the greens. My garden feeds me all summer and in good years, all the way through next June.

There’s little left of the Italian kale (AKA Tuscan kale, AKA dinosaur kale.) Three generations of rabbits have been eating them since the little monsters hatched in the spring. I still have seven collard plants to process – the rabbits don’t like collards. The regular kale I still use for salads. Early European settlers in Minnesota would dig through the snow to find kale plants, not just surviving, but still producing leaves.

I usually cook my greens southern style (with minced smoked turkey tails) or plain, then put enough for two in plastic freezer bags and roll up the bags to remove the air before sealing and freezing them. The pot likker makes a lovely afternoon beverage or a soup base. I freeze some of this, too.

I already have a lot of vegetables in the freezer, as well as other more ready-to-eat foods from the garden, like containers of uncooked pasta sauce made from my August tomatoes. (To make, peel and seed fresh tomatoes, then throw them into a food processor with some basil and a little olive oil, garlic, salt and pepper. Buzz gently. Let sit room temp for about an hour. Serve over spaghettini.)

I usually don’t plant broccoli or cauliflower. The plants take up too much room in a small garden and a huge broccoli plant produces only one flower (maybe two if the season is long enough.) The plants take up nearly a yard of garden space in all of the cardinal directions. This year, though, I grew six plants and was looking forward to some nice big heads of broccoli.

They never produced. There wasn’t even a hint that the plants might ever flower. I wondered if the plants had been mislabeled. Maybe they were collards. But the leaves were curlier than my uniform collard greens plants. And that got me thinking. Why couldn’t I eat the broccoli leaves?

I remember many years ago when crudités first became popular. (Note: The first known use of the word ‘crudités’ appeared in 1960. The root of the word is from Latin for indigestion.) In the 1970s, it seemed the peak of sophistication to serve crudités as d’oeuvres at parties, and at one of my own, I set out a tray that included peeled broccoli stalks along with celery and carrot sticks.

“What are you, some sort of broccoli fanatic?” someone asked me, refusing to even try them. (When pizza parlors became popular in the USA following WWII, many people refused to try that, too.) But the stalks and flowers are good, why not the leaves?

I picked a cluster of leaves, washed them, removed the tough stems, chopped them and cooked them northern style (without the smoked turkey tail.) They were delightful, more delicate and sweeter than collard greens and loaded with nutrition. I have five of the plants left, each of which should make about six healthy servings.

I started to wonder; What other food have I been throwing into the compost bin that I could have eaten? My tomato plants produced huge plants. It’s too bad that tomato leaves are toxic. Tomatoes, everyone knows, are related to deadly nightshade, the same plant that can cause hallucinations and death. Or, so I thought. It turns out that while you can still find tomato leaves on lists of poisonous plants, there’s no science to back up these oft-quoted claims.

You’d need to eat a pound of the leaves for any toxic effect. The alkaloid in tomatoes is not solanine, its tomatine. Not only are they not dangerous, they’re healthy, at least domestic tomatoes. Apparently, tomatine binds to bad cholesterol in the digestive system, and the combination is excreted. (I’ll want to do more research on this controversial health claim as well as the claim that they fight cancer.)

In most of the recipes that include tomato leaves, they’re treated as an herb, not a vegetable. They seem popular in tomato based pasta sauces and generally, for every two pounds of fresh tomatoes, you can add about 1/3 cup of packed fresh tomato leaves, late the way you would basil. They intensify the tomato flavor. Or so they say. I didn’t get a chance to try them, but I will next summer.

I have nearly 10 months to do more research to find out what foods from my garden I may have been neglecting. I’m not afraid to try things. I’ll let you know next summer what worked and what didn’t.

Still some work to do