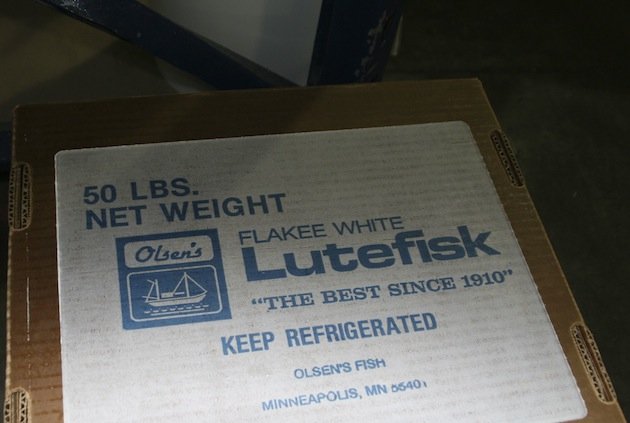 50 lb of lutefisk, packed up and ready to ship. (Photo by Stephanie Fox)

Chris Dorff, President of Olsen Fish Company, was on the phone with the First Lutheran Church of Duluth. It was, Dec. 1, the first Tuesday of Advent, and the church had been forced to cancel their big yearly fundraiser, their annual Salmon, Meatball and Lutefisk Dinner, set for the next day. A foot of snow was already on the ground and another 15 inches were expected to fall by the time of the dinner.

This article is second in a two-part series. Read part one, Lutefisk season in Minnesota: Here’s where it starts.

They’d called just in time. A truck was gassed up ready to carry 550 lb. of lutefisk from the Olsen Fish Company in North Minneapolis, to the church’s door.

Char Juntunen, chief lutefisk chef and organizer, said she’s spent four weeks on the logistics for the dinner and was disappointed. “It’s my adrenalin kick for the year, but there was no choice. We had 100 volunteers ready for two to four hour shifts. But, a lot of volunteers are leaving for Christmas and a many people won’t be available to help on another day. This time of year, around Christmas, it’s hard to get volunteer workers.” 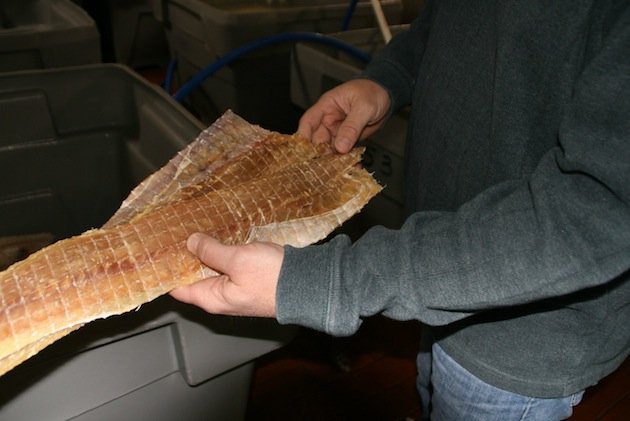 It’s the first time in 19 years that First Lutheran won’t be serving lutefisk. The dinner raises $10,000 for many of the church’s charitable programs. During nearly two decades, the dinner has grown from 400 people in the first year to bringing in 900 to 1,300 hungry diners in recent years. For many, it’s an important holiday tradition. People drive from the Twin Cities, Iowa and Wisconsin to attend,” Juntunen said. “If people can’t come, we’ll have no trouble selling the extra meatballs (Juntunen says there are 1,750 meatballs) and the 390 lb. of donated salmon will go to a local food shelf.” But, the church will now have to find another way to raise funds.

Juntunen is fussy about her lutefisk. “When you buy lutefisk and it’s got skin on it, if you can see yellow, don’t ever go with that,” she said.

“When I cook lutefisk it at home, I set the oven at 400º,” she said. “I put it on cookie sheets, sprayed with PAM. (Make sure the cookie sheet has sides, she warned. Lutefisk produces lots of liquid.) I brush the fish with butter with a little bit of Lawry’s Seasoned Salt.

She warns against overcooking the lutefisk. “The hard part is you have to watch it. After about 10 minutes, I stick my fork in the pieces and if it feels like it’s going to flake, it’s done. If it looks like snot, don’t eat it.”