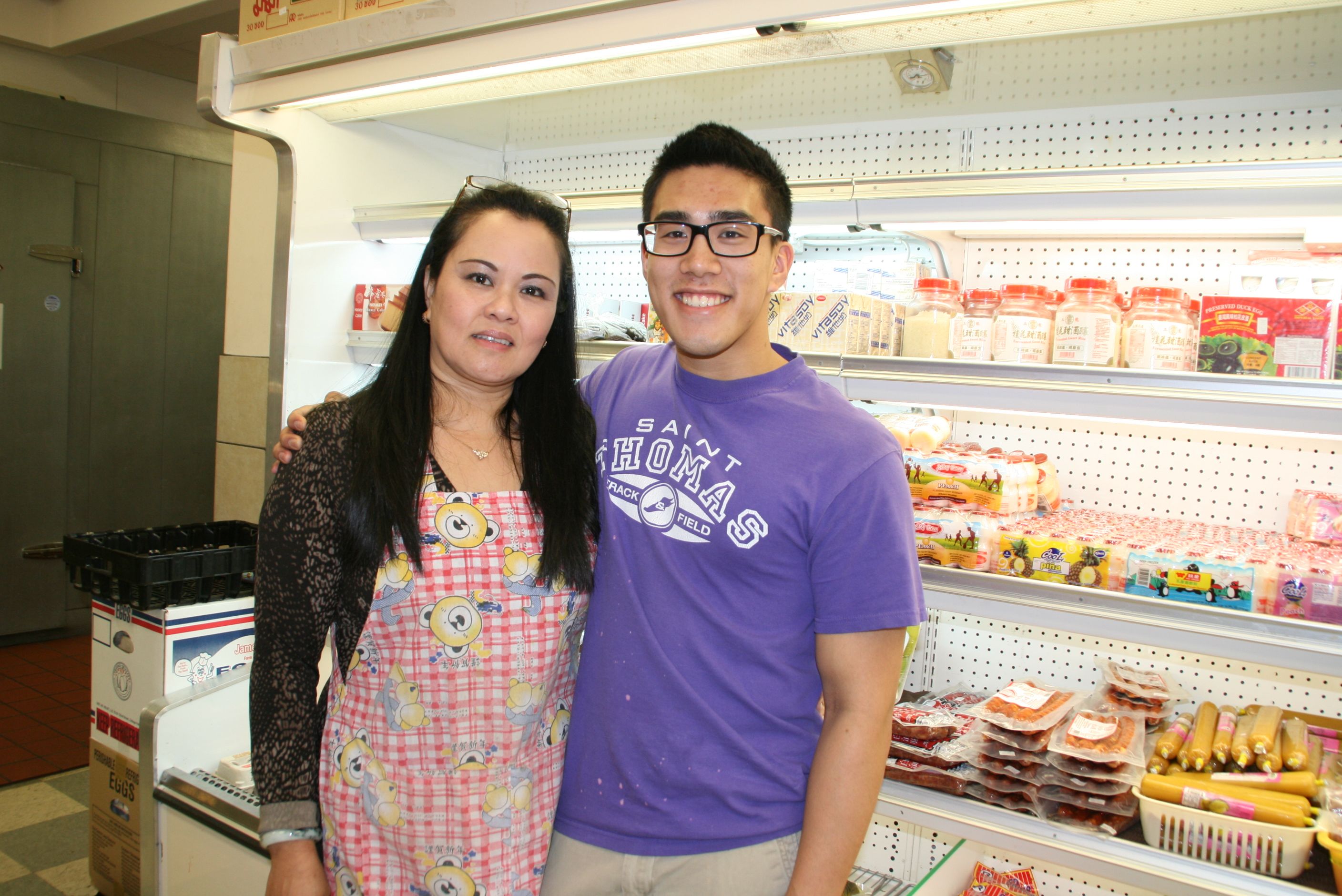 In China, the number eight is considered lucky. That means that “88,” as in St. Paul’s mostly Southeast Asian grocery store, 88 Oriental Foods, is double lucky.

Once, owners Vanh Soumountha and her husband Peter Ratsamy needed a lot of luck, arriving as refugees from Laos (Ratsamy is ethnic Chinese), first to California, eventually settling in the Twin Cities in 1990. They opened their store 10 years ago and it’s been a popular food destination ever since.

“Mom’s the cook,” says the young Ratsamy. There’s a lot to love about Soumountha’s freshly made deli take out. The to-go choices include food on a stick like the tasty bar-b-que beef or pork kebabs and succulent chicken wings.

Do I smell waffles? Yes! There are warm, tender waffles, made the Asian way, with sugar and coconut milk. “You eat them just like waffles,” I was told. “We like to eat them with coffee in the morning.” (Or, in a not so Asian twist, try toasting them and topping with ice cream for an all-American dessert.)

If you want to try a Vietnamese-style dessert, there’s the che ba mau pick-your-own-toppings bar, where you can choose tiny, brightly colored cubes of grass jelly, agar-agar, tapioca and more, ready to be mixed with coconut milk and cream. If you don’t know what color to order, just ask.

Or, take home some bright red chicken curry, pork stew or egg rolls, or what the store’s business cards claim is “the best larb in town.”

In the frozen food section are more unusual items, like the whole frozen walking catfish (clarias batachus) and something labeled “ring fish.” These are dozens of small silvery fish placed tail side in, forming a circle. “My mom pan fries it and we eat it with peppers and sticky rice.” said Ratsamy. “It’s pretty salty.”

You can also pick up frozen palm nuts (used in popular desserts like Malaysian shaved ice—think snow cones with toppings) and betel nuts. “Thais, Vietnamese, Burmese—every country chews betel nut, but only the old, old people. Young people don’t like it,” says Soumountha. The nut, actually the fruit of the areca palm tree, is used as a digestive all over Asia.

Much of what is found in the produce section can be used as medicine, says Soumountha. She searched for English names for some of the vegetables, bringing out a book, written in Thai, with translations. Sometimes, there was no English equivalent, but she knows what foods cure what.

The kapao is good for constipation, she said. She picks up another leafy green herb, name unknown. “It’s good for tapeworm, or hypertension,” she says. “You can put it in a salad or in a spring roll or in a tea.”

“Pennywort,” she says, “is good for the eyes or when you have too much heat in your body. Moringa is for eyes and blood pressure and diabetes. Eat the leaf and the fruit.”

“Back home, it’s herbal medicine. You eat it every day. Everyone should eat healthy herbs.”

One of the store’s biggest sellers is Soumountha’s made-from-scratch Thai sausage. Some of their customers eat the pork sausage as is (raw). “When I eat it, I like it cooked,” she says. She also makes spicy sauces for sticky rice. “Asian people like to eat everything with hot sauce.”

A television mounted high on a wall plays a talk show, beamed directly from Thailand. It’s all in Thai, but I hear a startling snatch of English—in a makebelieve Spanish accent. “You look Mahvelous,” the voice says. Ratsamy doesn’t recognize the reference. It’s not cultural, it’s generational.

Ratsamy is currently a student at the U, class of 2015, studying economics and management and plans to run the store, someday. “My dad ran my grandpa’s store. Hopefully, I can do the same someday.”

88 Oriental Foods is located at 291 W. University Avenue on what’s soon to be the light rail between Galtier St. and Farrington St. There’s a small parking lot and a family-owned jewelry store inside.

Chaom—cook the leaves with eggs or in Thai hot and sour soup. Serve with hot sauce.

Chicken wings on a stick