“I used to have a bad attitude,” said Janaysia Jaco, an eighth grader at Murray Jr. High, in Saint Paul. That was before she started the Girls in Real Life (GIRL) program, where she meets every week in a new program designed to give young girls empowerment and leadership skills. Someone told Jaco that GIRL might be a good fit for her, so she joined. As the program nears an end, she said it has changed her attitude.

One particular experience she had with the group helped her see the world a little differently. The girls in the program went to Feed My Starving Children program, where Jaco and the other girls had the opportunity to help others, and learn about people in need.

G.I.R.L. began as a pilot program at Murray Junior High in January of 2011, running through May of that year. This year, the program ran all year long at Murray, as well as beginning at Ramsey and Farnsworth, with each program serving about 40 girls, according to Price.

Price originated a similar program, called Girls in Action, in 2005 at a school in Minneapolis. The program was designed for grades 9-12, and since its inception has expanded, and is used around the United States and in other countries, Price said. Currently there are about 1700 girls in the program, Price said, in Minneapolis, Chaska, Detroit, Chicago and Guatemala.

About the second year that Girls in Action was taking place, Price decided that a program needed to serve the younger girls, who had not yet reached high school. Then, two years ago, Dawn York, whose son attended Murray, encouraged Price to do a Girls in Action-like program at Murray.

York said that when her son started going to Murray, she began co-chairing the parent association, and the issue that kept arising was that there were girl conflicts happening in the school.

Last year, Price wrote a pilot curriculum, which included input from parents at Murray. “We came back to the drawing room with the parents and the administrators at the school,” York said. Much of the issue that the parents and teachers wanted to address was verbal interactions- “She said this. You look like this. That kind of craziness,” York said.

In addition, many of the parents wanted to address that their daughters had low self esteem, York said.

They began the pilot program at Murray in January 2011 with about 40 girls. Some had been identified through the administration and the school, but York said “We made it clear — it wasn’t just girls that were having behavioral issues. There could be a combination of things going on — it could be low grades, it could be behavioral, it could be about being able to socialize with young ladies, it could be trying to find a place somewhere.”

York said that at first, the girls thought it was going to be a social hour. “To their dismay, they found out you’re really are going to learn something, and be held accountable on different levels,” she said. “This isn’t just a get together. Let’s be honest: there are expectations that are being made of me and I better reach them.”

The program meets once a week for about an hour, and the GIRL program emphasizes the importance of making that commitment. The only reason one of the girls should miss the program is if they have to “handle their business” such as getting extra help for a text in class. But “a lot of the girls do what they need to do to be there every week,” she said.

Before they begin the program, they have to sign a student agreement that lays out their responsibilities. They write a statement about why they want to participate in GIRL, and what they want to change. “We keep bringing the ladies back to their goal,” York said. 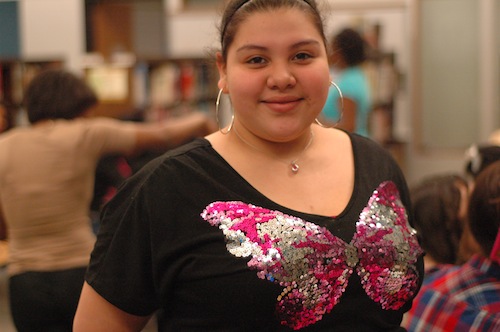 Daisy Hernandez, an eighth grader, said she joined GIRL because she thought it would be a good chance to better herself, and take hold of her future. She’s not sure what she wants to do for a career yet, but she said that she’s been enjoying her journalism class. Next year, she’ll attend Harding High School. For her final project, she’s doing research about abortion rates in correlation with prostitution, she said. All the girls focused on researching a different aspect of the prostitution issue — a topic which they chose themselves — creating display boards and presenting their findings.

The program has brought in various speakers, such as Judge Pam Alexander, President of the Council on Crime and Justice, as well as Sarah Bellamy, from Penumbra, who talked to the girls not just about theater but about social justice. Last year, the girls went to see Penumbra’s production of Ma Rainey’s Black Bottom at the Guthrie, which Bellamy prepped them for. “Their discussion at intermission was so different than other young girls. It was amazing. Some of them had never been to a play before. To expose them at that level was wonderful,” York said.

This year, they went to see Alvin Ailey Dance Theater at Northrop opportunity, and next year, York said the program will be forging a new partnership with Northrop and St. Catherine’s University to be a part of the Women of Substance Series.

Kathy Coolidge, a consultant in the program, said she loves working with the group of girls. “When you see the light come on, we see the behavior change,” she said. “They begin to have hope for tomorrow.”

Lenora O’Connor, the site coordinator for the Farnsworth, said the most important thing the girls are learning is that they can shape their own future, that they have a choice in how they respond to situations. “We’re teaching them about the power they have,” she said. “Where they are doesn’t have to define them.”

The pilot program proved successful, with behavior incident rates dropping by 19 percent in three weeks, York said, and 99 percent of the girls said they would recommend the program to their peers. 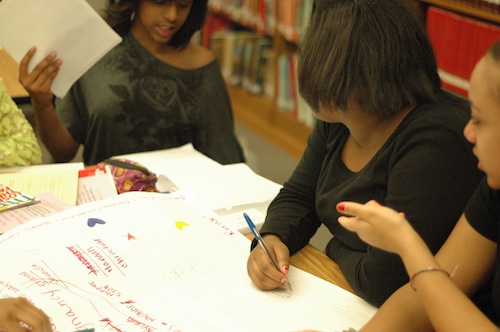 Girls learn to work together in GIRLS

According to Dr. Price, last year’s pilot showed improvements in some of the girl on girl issues, attitude, and bullying problems. “We even saw a slight increase in academic performance,” she said. “There was an overall settling down of the girls across the school. School has become a little calmer.”

This year, there were 117 students between all three sites, and about 85 percent of those students were African American. Next year, three new pilots will begin at St. Paul junior high schools. “Initially they wanted us to go into all nine junior high schools at the same time,” York said. “But my philosophy is you don’t want to get too big too fast — it would hurt the integrity and quality of the program. That’s not something I’m willing to sacrifice.”

Price said the program’s philosophy centers on getting each girls to see herself as a whole person, including her mind, body, spirit and soul. They learn about their own personal values, and who they are as people, and build leaderships skills, including developing a connection to service. For example, at the junior high level, the girls speak with community leaders, and visit service organizations such as Feed My Starving Children, to learn about hunger. The girls also learn about transitioning into high school, college and beyond.

While some of the girls in the program are identified and encouraged to attend by the school, the program is voluntary, and not just for problem kids, Price said. “If she’s a girl, she’s our target audience. Whether you’re a girl who’s failing out of school or one who appears to be a straight A student, every girl struggles for something.” The only criteria, Price said, is that the girls is willing to come and willing to stay, and willing to do the work.