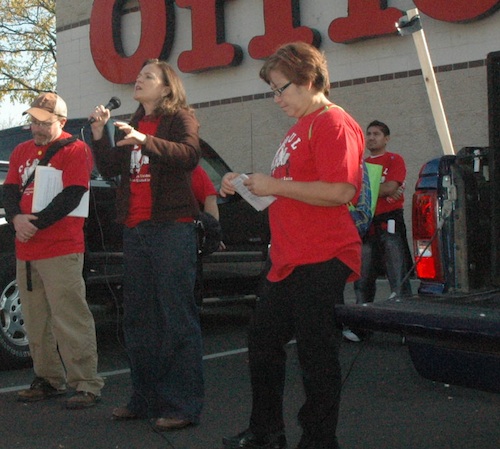 A month before Halloween, ghosts are in court. A lawsuit by janitors for Diversified Maintenance Systems (DMS) charges that they were forced to use “ghost time cards,” so the company could avoid legally-required overtime payments. After an agreement on conditional certification as a class action, the lawsuit is on hold to allow time for notification of possibly-eligible workers, and to allow them to opt in. The janitors who work for DMS clean for local companies such as Kmart, Sears, and Target.

According to the lawsuit, the employees would use their own timecards for their regular hours, and then use a ghost timecard of former employees for any overtime work, for which they would be paid in cash, according to Adam Hansen, an attorney with Nichols Kaster, representing the workers. While DMS asserts that the lawsuit, filed in 2011, is the result of labor organizing efforts (the workers have been organized by CTUL), the worker’s lawyers point to numerous fraudulent practices that the workers experienced at the company.

In recent years, DMS Employees have been paid via a pay card, which works like a credit or debit card, so that the money appears in a stored account under the employee’s name. They can draw cash from this card, just like a debit card. The DMS manager would cash the ghost worker’s card, and pay the employees in cash, he said. Prior to the company’s use of pay cards, the employees were paid by check, and the ghost employee’s check would be taken to a source that would cash it without asking questions, Hansen said.

Hansen said some of the plaintiffs allege the fraudulent behavior goes back as far as 2001, but the statute of limitations is three years.

The original whistle blower for the case is Marco Alvarez, who moved to Minnesota from Arizona in 2011.  According to the complaint, Alvarez worked for DMS in Arizona and in Minnesota, where he worked 80-90 hours per week as area manager. He brought the fraudulent practices to the attention of DMS, and then “DMS supervisors asked him to participate in the illegal acts and the DMS Defendants began to harass and intimidate him to such a degree that he was placed on medical leave and required medical attention and medications,” according to the complaint. Because Alvarez is fluent in both English and Spanish, he was able to encourage other workers to take action after he himself resigned.

According to Hansen, DMS admits that the fraud occurred, but blames a rogue district manager named Carlos Medina, who now cannot be found. “They would prefer to look at this case as Carlos Medina acting alone without anyone’s directive,” Hansen said.

The company is responsible even if it was the actions of one individual, but Hansen said that the facts on record point to Medina’s actions being a practice that happened with more than one district manager.

One plaintiff, Hansen said, asserts that Medina learned about the practice from a different manager in Michigan, where the plaintiff also worked.

Hansen said his firm hopes to resolve the case out of court once the notice period ends. If that works, that will be the end of it. If not, they will gear up for a trial, but he doesn’t think that’s necessary. “There is no question as to liability,” he said.

On September 29, workers and supporters picketed Kmart on Lake Street, and held a rally across the street, organized by CTUL, drawing around 200 people. City Council Member Betsy Hodges and State Senator Jeff Hayden, among others, spoke at the rally.

“We believe class action is a strategic one tied to unionization efforts,” said Andrea D. Kiehl, the General Council with CMS (who formerly represented them through Ogletree, Deakins, Nash, Smoak & Steward, P.C). The company gets misrepresented “whenever you have a situation like this when an organization takes extreme measures to try to reach the ultimate conclusion they want to reach,”  she said. “In this instance when there is an organization trying to unionize employees and not feeling they are getting support, they use things such as class action and making complaints to regulatory agencies.”

According to Kiehl, DMS has never had a policy about not paying workers for overtime. If there were employees who clocked in under other ID numbers, “it was under the directive of a rogue manager and not the company’s policy,” she said.

According to Kiehl, both parties have moved forward with a stipulation to conditional certification. “Parties reach decisions of this kind when there is minimal burden of proof on the part of the plaintiff,” she said. Even if parties do everything they can to comply with the law, they often times “agree to move forward with certification rather than move the matter with a judge,” she said. However, DMS has not ruled out taking the matter to court. Kiehl also said some of the named plaintiffs benefited from their own illegal actions.

“Thousands of dollars of overtime wages have been paid each year,” she said. Reaching certification has stopped discovery, since the lawsuit has been stayed, she said.