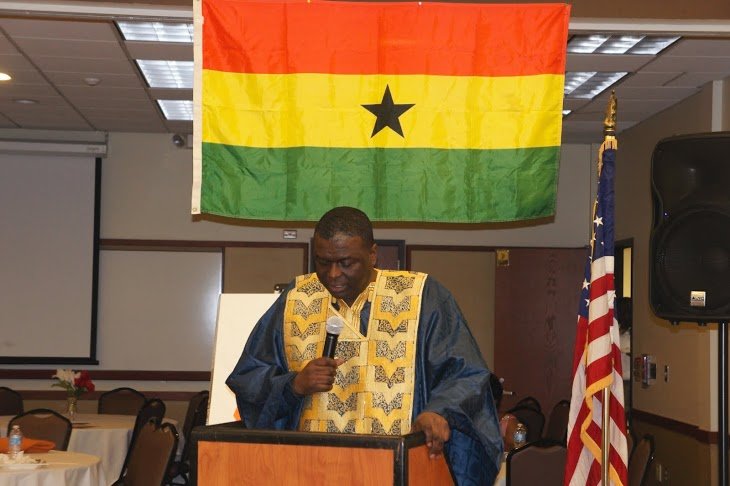 The Ghanian Association of Minnesota (GhanAM) marked Ghana’s 57 years of Independence with a night of dinner and dancing. GhanAM also announced the creation of a scholarship for youth working in the community to pursue higher education.

The dinner was held in Coon Rapids, where Reginald Chapman, WCCO reporter was the guest speaker. Chapman outlined the critical role of civic engagement in building strong communities, past present and future. He said it would take more than just giving money to people for school, however.

“You also have to nurture them,” Chapman said. “You have to be there along the way to help them through the rough spots, to guide them around the potholes so that they can be as successful as you are.”

On March 6, 1957 the British colony of Gold Coast gained independence along with a new name: Ghana. Less than a hundred year earlier Western superpowers had divided the African continent among themselves. Yet by 1961, Kwame Nkrumah, Ghana’s first president, offered all primary and middle school students a free education.

“Those traits and values that led to the liberation of people back then still exist today,” said Chapman. “We must pass them down to young people in this room as gifts from one generation to the next.”

By listening to elders and watching out for one another, the dream of achieving a degree that can become a reality for young people in the Twin Cities and beyond, he said. Chapman, also an adjunct professor at St. Cloud State, sees mentorship as critical to the success of young people, which influenced his decision to teach at their school of mass communication. Enrollment of African American students in the program has increased 60 percent since he joined the faculty.

At a time in the nation’s history when job-growth remains sluggish, the disperate impact on communities of color is undeniable and most severe in Minnesota, according to a 2013 federal report; the telling numbers in terms of educational outcomes, home ownership and even the possibility of wealth building speak volumes. Chapman said that those who volunteer benefit through increased job prospects, better health and overall well-being.

I think volunteering in the community also helps us gain that visibility,” said hostess Akosua Larbi-Osei. “We want people to know that yes, we live in Minnesota, but we also want to maintain our sense of identity as Ghanaians.”

To that end, GhanAM’s Academic Foundation Committee will grant scholarships regardless of religion, creed, sexual orientation or disability status. All Ghanaian high school seniors on track for college or trade schools and those already enrolled can submit applications through June 30, 2014. A complete application will include a resume and essay portion that focus criteria like community involvement, academic accomplishments and professional goal-setting. Scholarship recipients will be announced at an awards banquet later this year.

When Collins Ofori-Amafo arrived in this country in 1986 there were maybe 100 Ghanaians. Now there are over 6000 of them living statewide, said Amafo, a member of the Committee. In that time, he’s seen the Association grow from something of a social club into a group of established leaders planning for the long-term.

“Parents have the mind-set of people living in Ghana and these children are growing up as Americans” Ofori Amafo said. “They are torn between the two cultures. He said it was it was important to, “help them move up slowly, or else we are going to regret it.”

Maintaining that momentum will may critical to many communities that must deal with similar cultural dichotomies as the age of globalization and a more service-based economy, where following one’s passion can seem terribly risky. It’s adversity like this however, and the thought of past victories that encourage so many to persist and to thrive. That night, once all was business was taken care of, Tiyumba Cultural Group provided song dance, while DJ Za Za played afro-pop until the night finally came to an end.

Young people are hungry for a career… to follow their passion,” Chapman said. “On this day that we celebrate the independence of a great nation, let’s also celebrate the young people’s re-commitment to service in the community.”