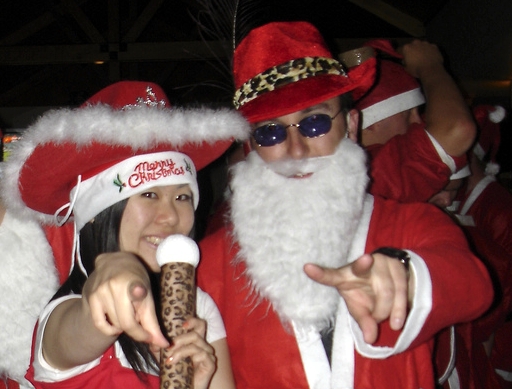 There’s something about a man in a Santa Claus suit that just drives me absolutely crazy! Maybe it’s the warmth of all that red, hot, sweaty flannel set against the austere coldness of those black patent leather jackboots. Maybe it’s because those rosy cheeks and twinkling eyes bespeak a passion about to erupt from a man who just spent a cold, lonely year cooped up with a pack of dwarves. I’m not sure. All I know is the sight of a Santa sets my body aflame with unbridled desire. My housemates don’t approve of this fetish, and when I picked up a mall Santa and brought him back to my place on his break, they sent him packing. What’s a girl to do?

Wow. Well, I can’t say I blame your housemates, that’s a fairly disturbing fetish. There’s no telling what will turn a girl on—I mean, guys have the nurse fetish and the French maid fetish, why can’t a girl want to go further with Santa than sitting on his lap? I feel like I’ve heard about this kind of thing before—maybe in Penthouse. Speaking of which, maybe the way you can get this past the housemates would be to let them know you’re doing experiential research for some new erotica you’re writing. Or a comedy skit. You might get some good laughs out of this one.

I don’t mean to sound judgmental; the way you describe the big guy makes him sound almost sexy. (Almost.) Well, what are you going to do? You’re running out of time as the Santa season closes, so you might as well get out to the mall and get another one. If the venture into Bukowski territory for the sake of writing doesn’t fly with the housemates, then maybe you can hole up in one of those cheap hourly hotels—I think there might be a couple left around here. But you better watch out and use protection, because who knows where Santa’s been? I hear he gets around.