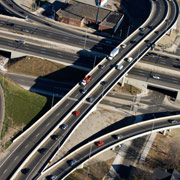 The average American spent 11 percent less on transportation in 2009 than in 2008, saving $946 per household, according to the latest U.S. Labor Department consumer expenditures survey. No other consumer purchase sector showed average savings greater than $150.

Gasoline prices fell in 2009 from historic peaks the year before and transit ridership hit an all-time high, explaining much of this remarkable trend. But there’s another reason, hidden in plain view, for our bargain-priced mobility: increased government subsidies.

Between general revenue bailouts of the deficit-riddled federal Highway Trust Fund and the 6 percent of the stimulus program that went to transportation work, motorists have been relieved of paying directly for more than $70 billion in road and bridge improvements over the past two years. Property taxes and other non-user revenues kick in tens of billions more each year.

So it’s no surprise that the latest estimates of user financing for U.S. roads and bridges barely exceed 50 percent. Transit is somewhat more subsidized proportionally, but there’s so little of it and so many motorways that the latter consume as much as 20 times more general taxpayer dollars. This is welfare not only for workaday commuters, but also for roadside businesses and the trucking industry.

If not for the fact that so many conservatives drive, they’d probably be screaming about rubber-tired socialism. In the absence of political will to keep fuel taxes and vehicle registration fees abreast of highway maintenance and expansion costs, it means cutting spending or dreaming up novel ways to charge travelers more of the full price for the benefits they receive.

Here’s a compendium of schemes being advanced in Minnesota and around the nation to prop up financing for roads and bridges:

• Taxing miles, not gallons. Greater fuel efficiency across the U.S. motor fleet has cut into gas tax collections for years. Minnesota and many other states have studied replacing the levy at the pump with a fee per mile traveled. This high-tech idea could even fight congestion by charging more for driving during rush hour or on heavily traveled routes. But concerns about privacy, coordination across state lines and high costs of implementation make it a remote prospect. Besides, per-mile rates would be no less a political football than gas taxes.

• Tolls. From North Carolina to Illinois, states are turning to tolls to finance road and bridge improvements and rehabilitation. Officials in Louisville and southern Indiana say tolls could raise more than half of the $4.1 billion needed to replace two Ohio River bridges that are now free to motorists and to update a major highway interchange. “There’s more interest in tolling today than there has been” in more than 30 years, Jack Finn, national director of toll services for the transportation consulting firm HNTB, told USA TODAY. Little of that interest has reached Minnesota, however. Plans to greatly expand tolled express lanes on Twin Cities freeways would pay only for targeted congestion relief, not significant new infrastructure.

• Privatization. The Indiana Toll Road and the Chicago Skyway, busy midcontinent highways, have been turned over via long-term leases to investors who promptly raised tolls. Chicago tried to rent out Midway Airport and some Minnesota conservatives proposed doing the same with Minneapolis-St. Paul International Airport, but private capital hasn’t materialized. In fact, it’s doubtful that any Minnesota transportation asset offers enough revenue potential to attract privatizers at reasonable lease fees.

• Less mowing, more gravel. At least half a dozen states have reduced mowing along highways. In Virginia, officials hope to save $20 million a year by cutting out grass-cutting and asking citizens to pick up the slack. Few have volunteered. In Wisconsin and Illinois, cities are deploying their mowers to state highway ditches and medians where 4-foot-tall weeds have raised safety concerns. Meanwhile, hundreds of miles of paved rural roads across the country are going back to gravel as a cost-cutting measure. Gravel roads require expensive regular maintenance, but still impose only a third of asphalt’s public costs over time. Drivers pay more in wear and tear on their vehicles, however.

• Bonding. Minnesota has borrowed more than $1 billion to speed up construction of roads and bridges in recent years. Even at low-low interest rates, though, the money has to be paid back eventually. Most of our highway bonding is backed by the state’s first gas tax increase in 20 years, which destroyed the political careers of a handful of Republicans who voted for it. But GOP leaders in Texas, Utah and Virginia are borrowing heavily for highway improvements.

• A word from our sponsor. In Georgia, corporate sponsors have paid millions to advertise on highway helper trucks and the state’s 511 traffic information program. This follows the longtime example of transit agencies that have plastered commercials on the sides of buses and rail cars across the country.

• Roadside attractions. Highway rest areas are expensive for government to maintain and are often shut down in tight budget times. Federal law prohibits commercial concessions at rest areas on interstate highways built since 1960, a measure to protect restaurants and filling stations at exits. At least five states have petitioned Washington for waiver or repeal of the provision, hoping to commercialize their rest stops. Concession facilities on older interstates, mainly in the Northeast, produce profits, not costs, for the public.

• Big Brother is watching. In Pennsylvania, Oklahoma and at least half a dozen other states, officials want to catch more unlicensed and uninsured drivers with cameras that record license plate numbers. Some places use cameras to nail speeders and red-light runners. The goal: more fines for illegal use of public thoroughfares. The practice has been ruled out here by Minnesota courts and state legislators have shown little inclination to legalize it.

• Defund transit. The libertarian Reason Foundation proposed stripping transit funding from the federal fuel tax, which would increase nationwide highway revenues by $8 billion a year. Reason says transit is a “peripheral concern” that ought to be solely a state and local responsibility. Minnesota roads would get about $160 million extra, enough for one major river bridge, along with a likely end to its rail transit plans. Minnesota couldn’t do anything similar with its gas tax because it’s already 100 percent dedicated to highway purposes.

Politics and special-interest backlashes complicate nearly all of these strategies. Raising the gas tax is complicated, too, but it worked for decades in Minnesota and across America until this dedicated user fee got unfairly caught up in post-Reagan antigovernment passions.

But even Ronald Reagan raised that tax and got re-elected; he’s still canonized by this era’s conservative anti-tax hawks. We need more leaders with that kind of courage and concern for our nation’s prosperity today, and fewer citizens demanding a free ride on roads paid for with other people’s money.