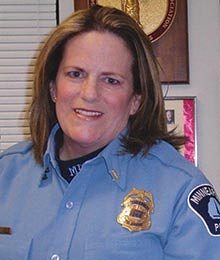 In 1984, when Kim Lund became the first licensed female police officer in Virginia, Minn., domestic abuse calls in the state often ended without an arrest.

“Thirty years ago, we seldom made arrests on domestic violence unless someone was dead or close to it,” she recalls. “You asked people to go their separate ways and try to smooth things over. Many times you gave one of the parties a ride to a family or friend’s house.”

The protection of domestic violence victims, as well as vulnerable adults, in Minnesota and nationwide has changed dramatically since the beginning of Lund’s career. Arresting an aggressor, pressing charges and getting involved in a victim’s business is no longer optional, due to changes in state law.

A focus on victims

Now a Minneapolis lieutenant, Lund, 52, has been an active player in those changes as a staunch protector and advocate for all victims: the abused, the elderly and the young. In 27 years with the city’s police force, she has run the department’s domestic violence, child abuse and vulnerable adult units and taken the lead on multiple fronts to help those victimized by others.

“I think I am most effectively utilized when assigned to duties with victims and kids,” she says.

Lund has managed the department’s school resource officer program, as well as its juvenile diversion program, which provides first-time juvenile offenders with a positive alternative to the court system – and the hope that they won’t reoffend.

“I have loved working in the area of juvenile justice, mostly because there are so many ways it can be improved,” she says. “And I think it is an area that we can truly make a difference in someone’s life for the better.”

Lund is the state’s law enforcement representative on the Minnesota Crime Victims Reparations Board, which reviews crime victims’ cases from across the state to see if they are eligible for reimbursement for out-of-pocket costs. The board reduces the economic impact of violent crime on victims and their families by giving them financial assistance. It also advocates for those victims by holding criminal offenders accountable for the costs of crime through more aggressive collection of restitution and civil awards.

Though much progress has been made in protecting victims over the past three decades, not all of the recent developments have been positive.

“Unfortunately, we have seen an increased level of violence and younger perpetrators,” Lund says. “Kids are being more violent towards parents and caregivers.”

After the 35W bridge collapse in August 2007, Lund was tapped to oversee victim-related issues. She had done a lot of work with victims before, but this was different.

“It was months of long days away from my family, taking care of others and their families, putting together the puzzle of what the bridge looked like moments prior to the collapse,” she recalls. “Sorting cars to people and property, monitoring injuries, waiting with families at the Family Center – we are not good at that.” Vehicles and victims were assigned letters and numbers, depending on where they were on the bridge when it collapsed. “To meet and put faces on these things was difficult.

Lund still gets together with victims and families from the bridge collapse. On her desk is a cross that a survivor made from pieces of the bridge.

Lund says civilians can play a key role in preventing abuse and protecting those who are vulnerable.

“Get into your neighbors’ business!” she says. “Don’t be the person that gets interviewed on TV and makes statements like ‘I thought something wasn’t right.’ Be the one to make the call” and report suspected abuse. “Don’t assume that someone else will do it.”

Empowering girls and young women is also essential, she says. “We need to start raising our girls to become confident strong women, not victims. And if they do become victims, we need to support them.”

Alongside her work and time with her husband and children, Lund manages to find time to volunteer for groups such as the Domestic Abuse Project, an advocacy and frontline service for victims of domestic violence. She encourages others to join her.

“Find (a victim-focused organization) that fits your schedule and volunteer,” she says. “It makes you feel good.”