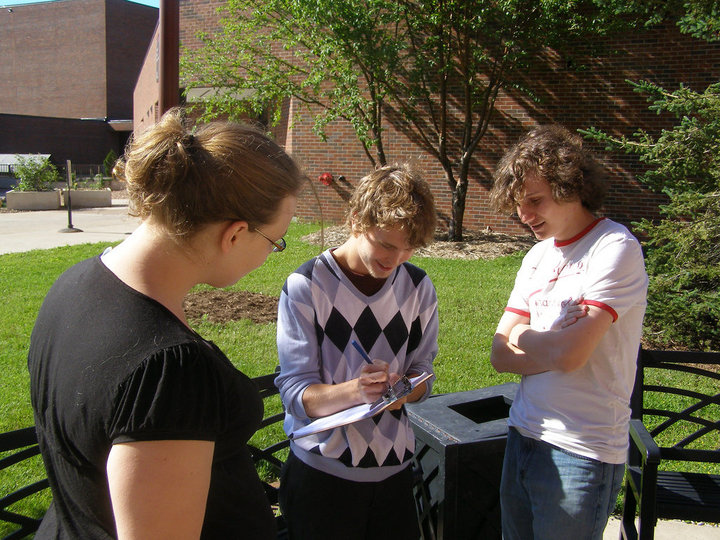 Peter Starzynski, the director of Get Up Minnesota, said that it was crucial that young people become aware and active in this year’s governor’s race.”Our governor is really important to how issues affect us, and in many ways more important than a president,” Starzynski said. Starzynski stated that the group’s main goal is to connect what happens in the state with young people.

Get Up Minnesota has done this by travelling across the state, setting up chapters at the U of M-Twin Cities, UMD, St. Cloud State, and Mankato State. Starzynski said their goal is to gather 40,000 pledges from youth to vote in the November gubernatorial elections. The group has already gathered 30,000 of these pledges statewide. Members started approaching youth with pledge sheets this summer and now are hanging out at student centers and across campuses talking with students about the election and how important their vote is. Get Up Minnesota’s strategy is to get the students’ contact information so they can later contact them and remind them to get involved and vote.

While Starzynski said they do not currently endorse any candidate, they had former candidate for governor Margaret Anderson Kelliher as a guest speaker at the U of M-Twin Cities event.

Sophomore Sophie Wallerstedt interpreted Kelliher’s speech as “saying everything that [DFL candidate Mark] Dayton will do for students as governor that [Republican candidate Tom] Emmer and [Independence Party candidate Tom] Horner won’t.” In spite of Get Up Minnesota’s message that they want to “move forward instead of left or right” and her own support for Dayton, Wallerstedt said that Get Up Minnesota “obviously leans too far to the left. It is too liberal of an organization to call itself bipartisan.” Wallerstedt also said that while Get Up Minnesota was a good program to inform students who aren’t involved with politics, it wasn’t as helpful for students who were already aware of the issues. This was true for Sarah Harper, a first year U of M student who wasn’t previously involved and liked the meeting because of its ability to connect to all students. “There was a great mix of people there that knew and didn’t know politics. It wasn’t intimidating.” Harper said.

Get Up Minnesota focuses on four main issues, which they label on their website as affordable education, green jobs, health care, and equality for all. At the meeting, they split the students into groups for each of these issues to discuss them in further detail and how they planned to increase student awareness of each issue.

Nick Khow, a first year student at the U of M, said he liked this approach because “you had a lot of choice in what you wanted to focus on.”

In the different groups the students came up with ideas on how to inform as many students as they could about their issues. They discussed different strategies such as setting up a booth in the student center where they would hand out free t-shirts and display posters that made the candidates’ views on their issues very straightforward.

Harper said she was impressed with the meeting because she felt that they actually accomplished something.

Get Up Minnesota will host meetings regularly on Tuesday nights at 5:00 PM in Coffman Memorial Union. They also have volunteer nights on Thursdays from 3-5 PM, where students can come and help out with data entry and contacting pledges. Campus Camp Wellstone, whose website says it is “an organization committed to teaching skills for grassroots organizing”, will also be coming to the U of M October 10 to host a training session for the group. On the Get Up Minnesota website Starzynski wrote, “No great movement in this country has ever happened without young people. Women’s rights, labor rights, and civil rights were all won in part with the intellect, energy, and excitement of the youth.