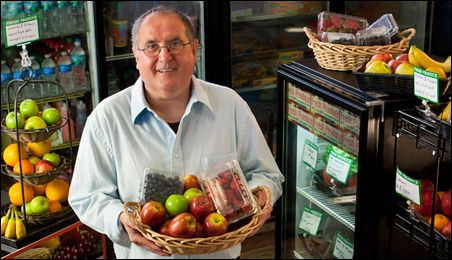 Peaches and plums, cauliflower and cantaloupes: you see them in mounds at farmers’ markets this time of year, but it’s seeing them for sale at a North Minneapolis corner market that is cause for celebration in a nation battling obesity.

At least that’s the way Minneapolis Health Commissioner Gretchen Musicant and Bassem Kablaoui, owner of the Lowry Food Market at Lyndale and Lowry, see it and why the shop is part of a new get-healthier media campaign called Making it Better.

The idea, publicized by the website and in ads in bus shelters, in community newspapers and on radio, is to promote getting healthier through smart food choices and more physical activity.

But more than that’s it’s a way of demonstrating how one person, one block, one neighborhood at a time can make a healthy difference. Read on the website stories of how residents of Glendale Town Homes tilled up and seeded and are now harvesting a community garden, of how Little Earth of United Tribes created a bike-sharing program.

And there’s Kablaoui. Seven or eight months ago he expanded the amount of fresh produce he carries, from the typical small market items such as onions, potatoes and maybe bananas. Why?“For one thing, it is healthier,’’ says this pleasant, garrulous man, a guy just as ready to talk plums as politics, religion or social issues. “Second, it is making money. Third, people eat too much chips and that needs to change a little bit.’’Also, since the big-box groceries are one to three miles away, his store puts 60-cent peaches within reach and affordable to area residents.He’s had some fruit spoilage; taking a chance early on by introducing strawberries and having three baskets go bad. But word got around.Nowadays the more fruit he buys, the more he sells, says Kablaoui, 63, a Palestinian by birth, who has a PhD in educational administration. “I didn’t expect it— to be honest— to be that successful,’’ he says with wonder in his voice. He brought in six cantaloupes the other day and three sold almost immediately.

He headlines the fresh stuff you might say, positioning it at the front of the store, along with recipe cards suggesting ways to use it.

Making it Better is also soliciting other such stories, examples of small efforts that make healthier differences in neighborhoods (including many in low-income areas), at work and school. Parts of the ad campaign are translated into Spanish, Somali and Hmong.

The effort is fueled by a powerful message, “the idea you can make a change’’ in daily habits and that people are doing just that in communities around Minneapolis, Musicant says.

Like what else, I ask her, is being done, particularly in lower-income communities to improve health? I reported last fall on racial and income disparities in health around the Twin Cities.

Musicant pointed to the use of EBT (food stamps) at five farmers’ markets in Minneapolis starting last summer (and that meant $20,000 worth of fresh produce purchased), an expanded Nice Ride rental bikes program in North Minneapolis this summer and seed money for the Venture North Bike/Walk Center. There are signs and maps to encourage more biking for recreation as well.

Making it Better is enabled by a $2.2 million grant from the U.S. Department of Health and Human Services that covers many other community health efforts and is part of the federal program, Musicant says. Olmsted County is also part of the Making it Better program.