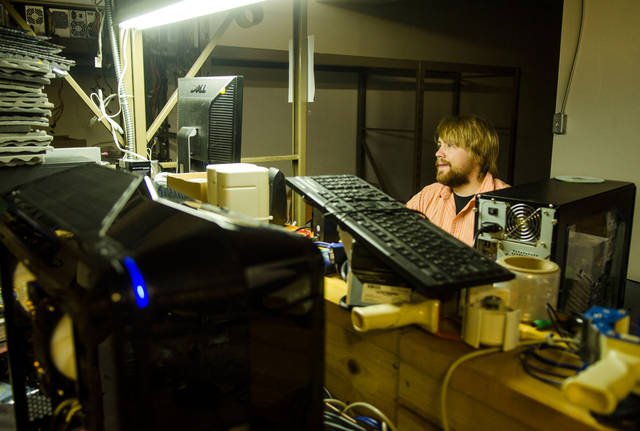 Most people might not notice the old blue building that houses General Nanosystems on University Avenue Southeast, and fewer may know the shop was a mecca for area computer enthusiasts for nearly two decades.

General Nanosystems, which specializes in custom-built computers and computer products, is closing its doors July 31.

When people were first discovering PCs in the early 1990s, Khalid Mahmood started the computer store out of a single room.

Throughout the years, General Nanosystems gave a number of University of Minnesota computer science students their first jobs, he said.

When Mahmood announced the store’s closing on its Facebook page , dozens of loyal customers posted comments reflecting their disappointment.

“It’s sad,” Mahmood said. “The light rail has affected us quite a bit, unfortunately.”

The store’s service department will continue to exist in a smaller building next door as a new company, Logic Systems.

Computer science senior Chris Dale started going to the store with his dad 10 years ago. He’s now building his own custom PC, which he’ll use for video game programming.

Dale said he prefers General Nanosystems over big retailers because of employees’ extensive knowledge of their products.

Daanish Khan , a General Nanosystems employee, said he sees a lot of young people coming in to build their own computers.

“Then they come here after what they’ve built doesn’t work,” he said.

Computer science senior Caleb Bak built his first computer six years ago and has continued to go to General Nanosystems for their customer service and honest expertise.

“They’ve never been about trying to make a quick buck,” he said.

Bak said he’s willing to pay a few extra dollars to get good service, but he said small, niche businesses like this one don’t usually fare well in the area.

Computer Mega Mall, located down the street from General Nanosystems, relocated in November after relocating from the University Technology Enterprise Center , which was razed to make way for a new apartment complex in the spring.

Because the site has more visibility and parking spaces, Mia said he isn’t worried about surviving as a small computer business.

“We haven’t been huge with students,” Mia said, “but there’s more coming in since the move.”

Bak and Dale said no other store in the state has a computer parts selection comparable to that of General Nanosystems.

“I’m going to miss them,” Bak said. “Everything’s going to convenient, online shopping. There’s still a demand for parts that you can’t get online.”