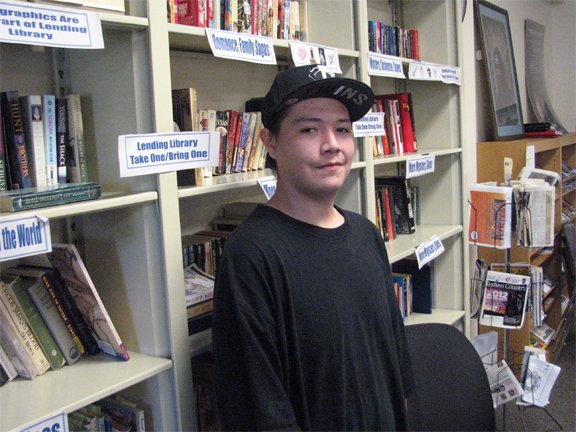 With recent high school graduation rates in the Native American community in the Twin Cities hovering between 21 and 44 percent, the obstacles seem daunting for students hoping to make a future for themselves in the urban setting. The American Indian Opportunities Industrialization Center’s (AIOIC) Adult Basic Education/GED program helps students achieve academically and professionally.

AIOIC was created in 1979 to respond to high unemployment and poverty rates among Native Americans in the Twin Cities area. In addition to its ABE/GED component, it operates the Takoda Institute that educates students in business, health care and information technology. Its focus is to meld education and job training in a way that is both culturally appropriate and prepares its graduates for a successful transition into a life of achievement.

One of those AIOIC success stories is Eugene Needham-Grayeagle (Standing Rock Sioux Tribe). Born in St. Paul and having moved to Minneapolis at the age of three years-old, his story is a familiar one for Native Americans. “Like a lot of young, Native men going to high school, I started off at South High School. And being young and dumb, messing around with the wrong crowd, I fell back on the classwork and everything,” said Needham-Grayeagle.

After switching schools, Needham-Grayeagle eventually felt ill at ease with his academic and family life. “Everything just didn’t seem right for me, so I dropped out of school at the age of 18. Another reason why I dropped out was that my mom and dad were having medical issues. My dad had heart failure, my mom had a really bum hip all her life and she was going through hip surgery so I had to take care of them.”

Two years later, Needham-Grayeagle took his first step back into completing his basic education before encountering more challenges. “I had all my credits done except for my last four or five for English and I was working at a gas station. So I couldn’t go to school and work at the same time because my hours were weird. So I had to drop school again and I figured on paying bills and everything.”

But while providing for himself and being a caregiver for his ailing parents, he took stock. “After working there for a year and a half, I was just looking at my life and saying, ‘I need more than I’m doing now because this isn’t going to pay all my bills for my future.’ So I came back a year and a half ago to get my GED.”

Now at the age of 25, he is on the path toward building a better life for himself and his family.

Needham-Grayeagle’s circumstances were not necessarily unique. According a 2010 study by the National Center for Educational Statistics, half of Native American students who enter high school will drop out, and of those who continue to higher education, only four out of 10 will earn a degree.

Darlene Barbour, ABE/GED Program Coordinator for AIOIC, has been working for the last 15 years to combat the graduation crisis in the community. “We have about 20 students per day – which is good – half come from the School of Business. They’re referred to us if they need to get their grade levels higher so they can get into the programs they want.”

While in her classroom, she works to ensure they are achieving as early as possible. “I usually target the younger ones and get them out of here as fast as I can. We graduate about six students per year and then we try to find scholarships for them. A lot of them don’t have money to pay for [GED] testing.” She says most students prefer to transfer over to the organization’s Takoda Institute of Higher Education. “It kind of eases them getting into a bigger college. Even going to Minneapolis Community and Technical College is going to be huge and from there they go onto a university setting.”

For Needham-Grayeagle, his experience was a family affair at AIOIC. “We’re really pleased with our graduates, his mother is in this program, she’s waiting to finish her math test. And then from here, she will go to the School of Business. His sister is a receptionist. Gerard, his brother, is coming back to finish his GED. It’s a family affair sometimes, the word-of-mouth goes around about what we do here,” Barbour said.

For Barbour, the work of AIOIC is to uphold the Native American community as much as possible. “They need to get started somewhere. A lot of times, getting their GED is just more incentive to continue into higher education. I think my biggest concern was reading that [Native Americans] are behind education grade levels, behind African-Americans and Hispanics, so we need to get our Native kids up and going and get them interested in math, sciences and reading.”

Barbour’s dedication to her work did initially take Needham-Grayeagle by surprise. “When I first started I thought, ‘get in, get out, just get it over with.’ But you have to take 40 hours to take the pre-test, to see where you’re at and I thought I would pass everything in my first shot, then I saw that I need help. Darlene was a really big help, she was like the smack down, ‘you get to work and get on it, don’t be messing around, don’t be clowning around.’”

After graduating from the program last spring, Needham-Grayeagle is preparing for his first semester at MCTC. “It’s really hectic and busy right now. I’m getting all my classes registered and getting all my books ready for school. It’s my first time going to college so I’m taking open ears and all the pointers I can right now to help me out.”

While originally planning to take courses in HVAC (heating, ventilation and air conditioning), he is now focusing on business management with the eventual plan to open his own business, selling Native American art and craft work. As a powwow drum singer, he wants to keep his culture close because of the encouragement he received from his peers. “I was in a drum group with Hoka-Hey and they were all supportive of me, they want for all of us to complete our education and keep the drum going and keep all the positive feelings.”

Needham-Grayeagle’s family has also been a source of encouragement. With his parents’ health on the upswing, he feels confident about his ability to achieve. “We’re really steady right now, it’s been on the incline, instead of the decline, as of late. We’re seeing past all the troubles we had, looking toward the future. They were a lot of help, they’ve had a lot of support for me.”

Hoping to return that support, he keeps things in perspective for others he meets. “I see a big relief. Before, when I didn’t get it done – getting my life on track and going to school – I just felt like I was in the gutter every day, head down not caring. Since I completed my GED, I’m chipper and jolly. When I see someone in my place, I tell them what I went through and tell them there’s always a future and it always looks good. You’ve always got to think positive.”

The AIOIC mission is to empower Native Americans to pursue career opportunities through education at almost every level. It serves approximately 1,500 individuals annually with education, job training and job placement, regardless of race, creed, color, age or gender. To learn more about its ABE/GED, Takoda Institution or Takoda Group, or to apply, call 612-341-3358, or visit: www.aioic.org.