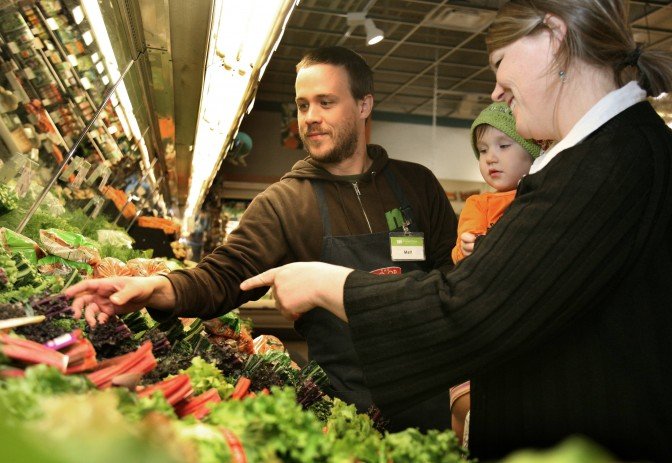 Last December, Mississippi Market Natural Foods Co-op signed a temporary developer agreement with the City of St Paul, stating that the two are working exclusively together to develop the former Hospital Linen site next to Metro State University and across from Swede Hollow Cafe on East 7th Street. Though there are still many steps in the process to complete, the agreement signals a decisive development in a two-and-a-half-year quest to bring a food co-op to the East Side of Saint Paul.

The journey began at a bus stop in August 2011 when a conversation between neighbors Sarah Geving and Beth Butterfield turned to the lack of options for East Siders to buy local, healthy, and sustainable food. Within a month, the two women were meeting with other community members who supported the idea and the group formed a steering committee. They created Gateway Food Co-op, an organization dedicated to either starting a new co-op or attracting the interest of an existing co-op that could open a new location and meet the diverse needs of the East Side community.

FULL DISCLOSURE: Michael May has been an East Side resident for over a decade and served on the steering committee of Gateway Food Co-op.

By November 2011, Gateway accomplished this latter goal and met with Gail Graham, Mississippi Market’s general manager, to discuss hopes for a potential East Side store. That discussion continued as Gateway persisted in creating community interest in the idea, gaining 50 paid members by Spring 2012 and doubling that number by the end of summer. Mississippi Market conducted a market study of the East Side and both groups met with community organizations and business leaders to learn about the East Side’s needs and concerns for a potential new store.

Over the following year, Gateway continued to grow its membership and reach out to the community. In July 2013, they sponsored a series of Sunday Suppers, chef-demonstrated cooking classes followed by shared meals. Each supper was inspired by the chef’s ethnic tradition, including Latino, Hmong, European, and a meal organized by youth from the Urban Roots organization, who shared their knowledge of cooking with food grown in small, urban gardens. Gateway also led a series of community engagement events with topics like recycling, food labeling, Minnesota Food Charter, and co-op shopping on a budget.

Meanwhile, Mississippi Market started meeting with the city and developing plans for a possible store. Once the temporary developer agreement was signed in December, Mississippi Market began soliciting input and financial backing from its members. By early March of this year, after a six-week campaign, Mississippi Market’s members had raised over $1.5 million dollars towards the construction of the new store.

As for Gateway, Mississippi Market’s signing the agreement was serious enough interest for the group to consider its mission fulfilled. In January, Gateway’s member-owners voted 106-0 to dissolve the organization and have their memberships transferred to Mississippi Market. Though Mississippi Market is confident that they will be able to buy the land and build the store in 2015, in the unlikely event that the project somehow falls through, Gateway is committed to re-forming and beginning the process again. Like Mississippi Market though, the former members of Gateway are positive that within the next year Mississippi Market will bring welcome change to Saint Paul’s East Side in the form of new jobs and great food.