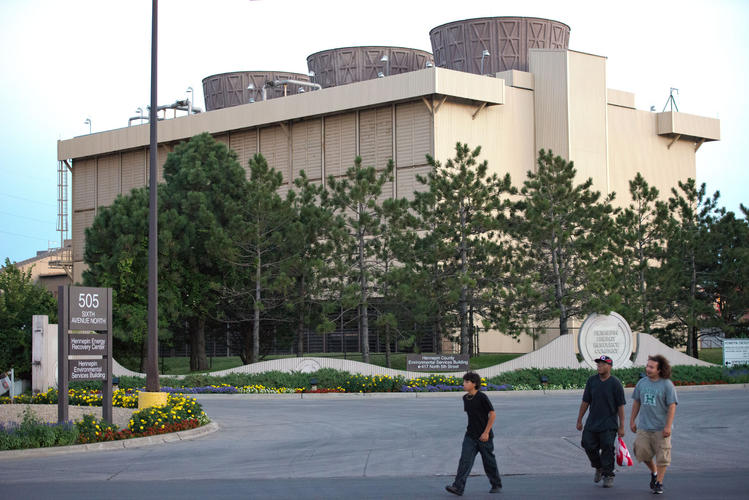 The Hennepin Energy Recovery Center, a mass garbage incinerator in downtown Minneapolis, wants to increase the waste burned daily by 212 tons. The move has faced opposition from neighborhood groups and residents. (Photo by Marisa Wojcik)

Now, after numerous delays, inconsistencies and errors, they are still looking for answers.

The process to appeal the burning of more than 20 percent more garbage in Hennepin County remains at a standstill after the most recent failure to provide enough environmental assessment information.

Covanta Energy, the operator of the Hennepin Energy Recovery Center, is seeking approval of a permit to operate the facility at full capacity, burning an additional 1,212 tons of garbage each day and increasing the amount of electricity produced.

However, the company’s inability to provide necessary information to the Minnesota Pollution Control Agency has prevented the environmental review that could approve the permit.

In the last three years, Covanta has delayed its appeal to the Minneapolis City Council 12 times, preventing residents and local organizations from voicing their opposition of the permit.

Without sufficient data from the company, the MPCA cannot complete the necessary Environmental Assessment Worksheet.

Groups like the Southeast Como Improvement Association and the Minnesota Public Interest Research Group say an increase in garbage burning will have negative public health and environmental impacts.

Covanta’s permit proposal was initially rejected by the Minneapolis City Planning Commission based on concerns that increased garbage burning would be “detrimental to public health, safety, comfort or general welfare.”

Neighborhood leaders and concerned residents have been waiting for a completed worksheet, which would outline the potential environmental effects of an increase in garbage burned.

“From what I know of the incinerator, the trash they’re burning is contributing to air pollution where I live. I’d just like an explanation as to why that should be increased,” said Lauren Mauk, University of Minnesota senior and Southeast Como resident.

Although it is possible to complete an environmental review within a matter of months, residents and organizations are worried that the process has taken so long to move forward.

“It makes me wonder why years have gone by without progress and if there’s something that they’re trying to hide,” Mauk said.

State officials said Covanta has submitted information for review several times and that each submission has been returned by the MPCA for additional information and new questions to be answered.

Some of the returns are due to inconsistencies and a lack of information, said Steve Sommer, an MPCA project manager.

“We need to know which information is correct and get all of our questions answered to make sure that we’re being thorough and accurate,” he said.

The process is similar to a homework assignment in that it will repeat itself until done right, said Justin Eibenholzl, environmental coordinator for SECIA.

Those following the process of Covanta’s appeal have expressed frustration with the situation.

“Here we are, it’s three years later and you have the MPCA walking HERC through the [environmental assessment worksheet], and they can’t seem to get it right,” said Josh Winters, executive director of MPIRG.

The length of the appeal process has made it lose public interest.

Eibenholzl said it has been difficult to explain the importance of the situation.

Despite the difficulties, organizations are engaging more with residents to advance the creation of a worksheet.

“Without strong public awareness, we won’t be able to have the conversations that need to happen when there finally is an opportunity for public comment,” Winters said.

Ralph Pribble, a public information officer with the MPCA, said it is important for residents to know their comments can ultimately influence the course of action for the development of the permit.

“People need to know that they can play a part in the development of the permit, but they’ll need to become informed about the proposal,” he said. “We are here to provide that assistance and the public needs to make known to us any information or concerns they may have.”