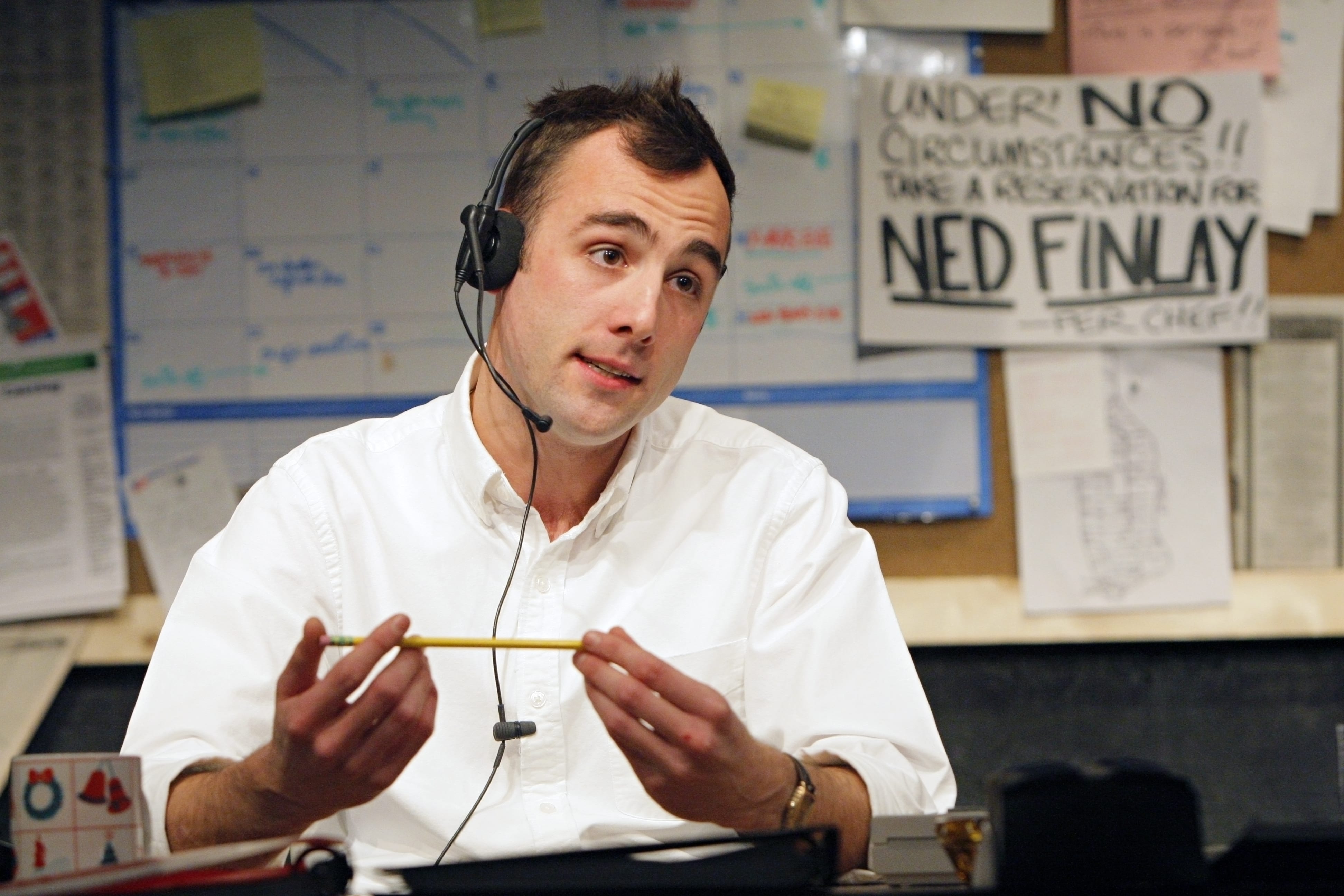 On the surface of it, there are three primary reasons I shouldn’t like Fully Committed, the returning comedy hit currently rounding out the Jungle Theater’s 2010 season. It’s a one-person show. It’s about a struggling artist. It’s about somebody’s day job. These three things instead turned out to be the reasons I loved Fully Committed. What can I say? The world’s a strange place sometimes.

There’s a reason this showcase for the talents of actor Nathan Keepers and director Casey Stangl played to sold-out houses in its first go-round eight years ago, and warranted a return visit: it’s a great production of a really clever play by Becky Mode.

Often when I’m reviewing a show, I’ll be scribbling down notes throughout the performance. Occasionally, though, there will be a production that refuses to allow me to look away, even for an instant, or even allow my brain to instruct my hand to write without looking. Fully Committed is that kind of production.

Because it really isn’t a one-person play. It’s a 20-person play, and Nathan Keepers is all 20 people at the same time. It’s mesmerizing, and mind-boggling. Keepers is his own acting partner. For 70 minutes, with only the tiniest of breaks to allow his main character to climb a spiral staircase out of sight of the audience, during which his voice on a pre-recorded sound cue still keeps the action running, Keepers ricochets from one character to the next at dizzying speed. In fact, I had to keep reminding myself that it was still just one guy, that it wasn’t a bunch of different people. That’s how well Keepers, under Stangl’s direction, brings Mode’s play to life.

The set-up is that Keepers’s main character, out-of-work actor Sam Peliczowski, is working an early December shift in the basement reservation office of the trendiest restaurant in New York. It’s so trendy, they’re all booked up (or as the chef demands everyone call it, “fully committed”) two months in advance. His two co-workers haven’t shown up, so he’s stuck manning the phones alone with no break, no food, and no relief in sight.

The egos of the staff often rival the egos of the customers who insist on a whole range of special treatments and last-minute miracle reservations. Sam is also fielding incoming and outgoing calls from friends, family, and his less-than-enthusiastic agent. But the thing that makes this whole gambit work is that these people aren’t just cartoons, they’re real human beings. Sam’s not just an actor struggling to be taken seriously. He’s a guy living paycheck to paycheck, trying to find away to free himself from the popular restaurant long enough to spend Christmas Day with his father halfway across the country. Otherwise, his father, who just lost his wife not long ago, may end up spending his first holiday alone. It’s details like that which make Sam so relatable. Sam wants to be successful at the thing he loves to do. The fact that that thing happens to be acting is almost beside the point. We all can understand the tug-of-war between the job that pays the bills, and the rest of our life which makes getting up in the morning worthwhile. More often than not, we let the job get in the way of life, rather than put the things that matter in their rightful place on our list of priorities.

From the first instant he answers a phone call, Keepers makes the performance conceit of the script plain. He’s not just conveying both sides of the conversation—talking, listening and then repeating so we understand what the person on the other end of the call must be saying. He is both sides of the conversation. We hear Sam, and we also hear the other person speaking to Sam. Back and forth Keepers goes, creating one caller after another, while also allowing us to know Sam a little better with each response. Then the script introduces the intercom to the hostess station, business office and kitchen—and Keepers creates everyone else working at the restaurant. Toss in the chef’s red emergency phone line and the world of this play is complete. Keepers uses his flexible voice and body to create all these characters, even though most of the time he remains seated at his station. It’s fantastic.

It was nice to see playwright Becky Mode get full attention in the theater program, because her name on the theater’s website almost seems like an afterthought. The big names online—and probably in the minds of most local theatergoers, including my own—are Keepers’s and director Casey Stangl (whose Eye of the Storm theater company is still missed). But with less intelligent material, you’d have a lesser result. After creating the original characters with fellow actor Mark Setlock, Mode shaped the text into more than just an assortment of wacky characters. This script isn’t just someone taking dictation, it’s been finely crafted. Over time, key callers emerge, vital information is slipped in but never as clunky exposition, and Sam slowly starts to wield the power that is being presented to him in order to get what he wants, in his career and in life. But it never feels manipulative or predatory. Since Sam is such a decent guy—evinced in how he interacts with all the people around him—we want him to win. It’s a great payoff for an audience to watch that taking shape, one conversation at a time, right before our eyes. Because the world of the script, inside and outside those basement walls, is so keenly observed in rich and funny detail, one good actor guided by a skilled director is all you need. For the Jungle, setting Keepers and Stangl loose on a script like Fully Committed is the equivalent for of printing money.