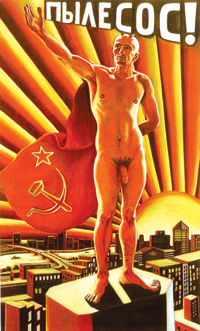 The Russian; a portrait of artist Pavel Sepelenko

Kristen Copham expects that viewers might be a little squeamish, even nervous, about her latest exhibit: 20 large-scale paintings of local male artists in the nude. But she dares them to look anyway and to question what it is that makes them uneasy.

Copham, a St. Paul native who moved to New York a year ago, addresses issues that lie beneath the lush surface of oil paint in her latest show, “Male Artists Exposed.” The exhibit confronts the traditional relationship between artists and their models.

Although male nudes were a symbol of beauty and physical prowess in classical Greek sculpture, today the male body is considered either homoerotic or shocking by a popular culture that seems wary of a vulnerable sensuality. Copham’s work challenges painting styles and cultural taboos through both subjects and process.

“I like to use the human form to create stories and also to challenge stereotypes and taboos that we have in our society,” she said.

Historically, many male painters have treated their women models as anonymous objects. But Copham chose to share some creative control with her subjects, many of whom are Twin Cities artists. She tweaked the process in a “stereotypically female” way, she said, giving them an identity and a voice.

“Instead of just ‘I’m the boss here and I want you to sit like this,’ I wanted to approach it as two artists working together,” she explained. She and her subject discussed the portrait and she wove each artist’s own visual style into her pieces. The resulting portraits represent a richly diverse range of styles.

It was a major twist for the male artists, who are accustomed to controlling the medium, to sit passively on the other end of the artist’s proverbial gaze. Some approached her idea as a great lark, Copham said, and others had more trepidation about taking off their underpants. All were subject to the physical rigor of posing. Most posed for at least four hours, and a few for up to eight hours.

Skinny young white guys, Copham admitted, were the most eager to participate, but she pushed to have a more diverse pool of subjects.

Copham also admits she was nervous about the nudity herself, but she was more interested in asking herself why.

“And I enjoyed that part of it too. I enjoyed dealing with the discomfort that comes with having somebody nude in the room,” she said. (Sometimes she catches herself feeling nervous when she’s painting herself in the nude, alone in her own studio.)

She caught a little break from her first subject, Minneapolis painter Scott Seekins. He seemed uninhibited as she twiddled with her paints, not prepared to look as he got into position. Most of the portraits she painted afterward involved full frontal nudity, but Seekins’ pose was more discreet, based on a baroque Diego Velázquez painting, Venus at Her Mirror, in which the model’s back is to the painter.

Copham was surprised that Seekins, whose persona is bound up in clothes (he is known for wearing black suits in winter, white suits in summer), didn’t mind being naked. His comfort helped set her at ease, she said.

During the project, the Twin Cities artists who posed for her developed a kind of camaraderie, she said. A few of the subjects told her they’d found the experience relaxing.

“There’s a lot more to explore than I initially thought,” she said. The artists she thought were so confident wrestled with the physical body in ways she’d never imagined. By the end of the project, she felt she’d faced down stereotypes, homosexuality, race, weight and age concerns.

“I think about women having these issues more than men, worrying about, ‘Oh, I’m getting old and I don’t look that good anymore,’” she said. “They’re feeling it too, you know? Everyone feels a lot of pressure in this society to be young and look good. It was kind of an eye-opener for me.”

Copham’s subjects will share their perspectives during an informal artist/model discussion at the gallery.

A voice for the mere model? Velázquez’s model never got that chance.