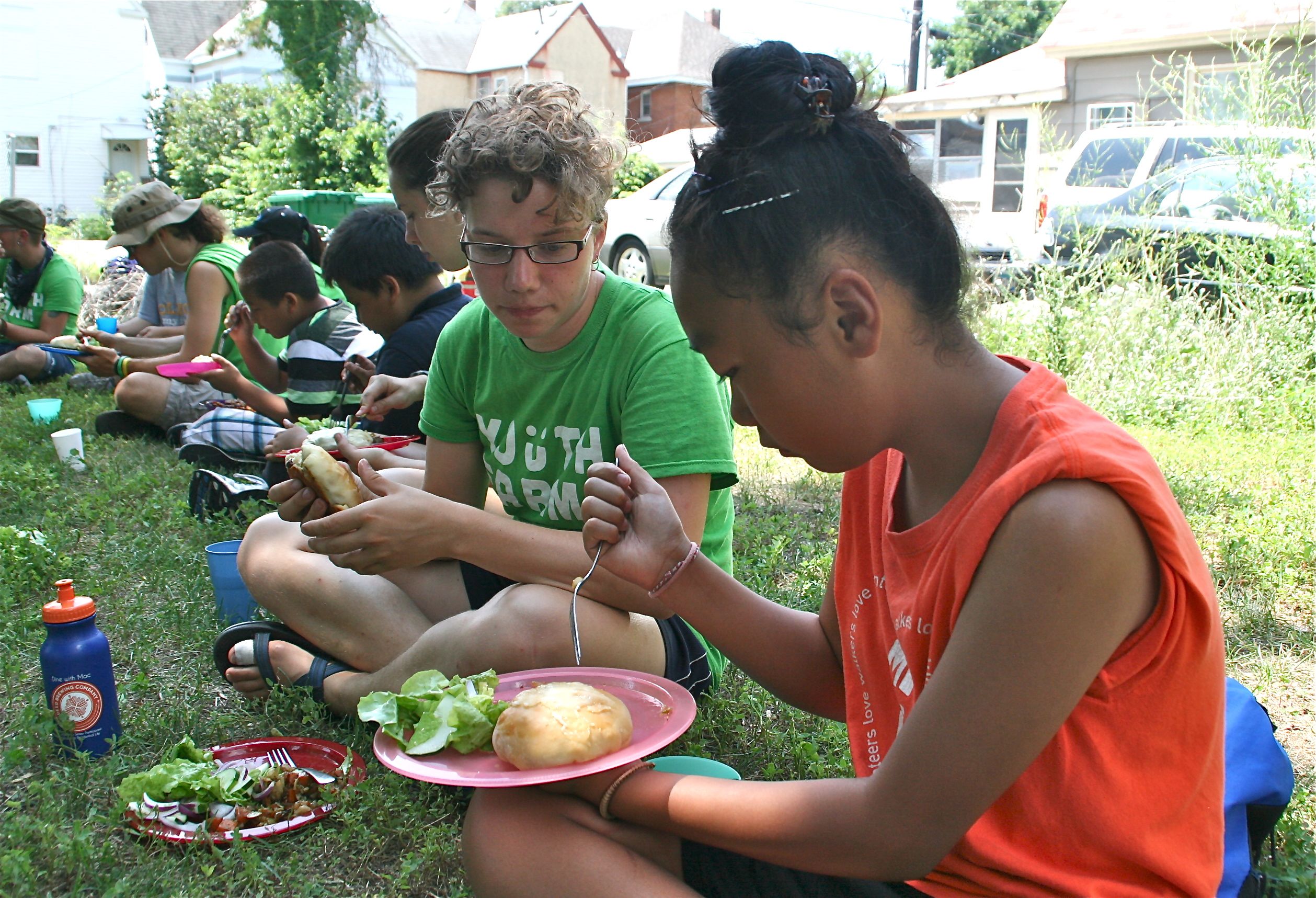 Abdi Dahir, a staff member with Youth Farm in Frogtown, looks to be about 16 and speaks about the organization with the confidence of a 29-year-old. It’s his second year with the project. “We have three sites in Frogtown,” he said. “We’re the newest, two years old, but Youth Farm is in five other neighborhoods. Today we built a new compost and we watered the plants.” It’s almost noon and it’s nearly 90 degrees. I ask him his age. “I’m 13,” he said.

Youth Farm and Market Project, now in its 19th summer, helps build youth leadership for kids ages 9 through 18, through urban agriculture projects. In summer, classes are offered three days a week for eight weeks. During the school year, there are after-school classes, with access to a greenhouse and kitchens. Program graduates, ages 18 through 24, can be hired as paid part-time teaching staff. More than 600 kids are enrolled, from the Frogtown, Lyndale, Powderhorn, Hawthorne, and West St. Paul neighborhoods.

In the kitchen, in a church four blocks from the garden, two of the younger members, Pao Xiong and Chelsey Carr, help Chef Nathan Sartain pull the runzas—buns stuffed with beef or mushrooms and cheese—out of huge ovens. Kids ages 9 to 11 are given a variety of responsibilities and receive wrist bands—badges, they’re called—to show what they’ve learned. At age 13, kids with experience, like Dahir, can become part of the volunteer training staff.

“Every day we do the cooking,” said Dahir. “We take turns with three or four of the youth farmers helping. We like to focus on vegetables from our farm,” he tells me. “But we’re not always at the farm. Yesterday we did an all day field trip to Lake Phalen to learn about water.”

“The youth in Frogtown are just awesome,” said Beth Ringer, the Director of the Frogtown Farm. “We have a 75 percent retention rate with kids coming back for more than one year. “Frogtown has a high concentration of young people and it’s really diverse. That’s one of the neighborhood’s biggest assets and they’re all represented at Youth Farm.”

Today’s salad is made from greens grown at the farm and served with vinaigrette dressing made by today’s young cooks. While much of what ends up on their lunch plates come from the Youth Farms, some are provided by partnered local co-ops. Today, there’s a sweet potato hash and today’s ethnic main dish, runzas. (Runzas are ethnic Nebraskan, it turns out.)

“We not only explore different cultures through food,” said Ringer, “but the kids prepare balanced meals for their peers. It’s one of the things that make the program unique. All the kids who were in the kitchen today end up there several times, learning basic safety and cooking skills. The chef is their teacher.”

Chef Sartain finishes the day mixing meatballs, prep work for Friday’s lunch. The bundles of Tuscan kale will go into a salad. “We slice them and massage them with kosher salt and olive oil instead of cooking them,” he said. Sartain arrives early in the morning, but he stays late to hang out with the kids. As he’s closing the kitchen, one of the kids comes in for a hug.

“The kids really help, although some are more interested in cooking than others,” he said. “It’s tangible to teach cooking techniques that they can take home and apply.” Much of the menu is set ahead of time, but today a co-op partner unexpectedly sent collard greens. “We’ll use this for something,” he said.

During the school year, Sartain is the chair of the Culinary Arts Department at St. Paul College bringing college students from his “Organic and Sustainable Agriculture” class to work with Youth Farm. “People here really believe in what they’re doing,” he said.

Outside, in an empty lot across the street, a few of the kids forage, picking mulberries off two tall mulberry bushes. The kids and staff members line up at a picnic table where Youth Farmers serve lunch to their peers. The kids sit on the grass, eating and talk about the day. Chelsey Carr poses for a photo. She wants to be an actress, maybe, she said. “My favorite job is weeding, “ she said. “I like cooking, too. I like all of it.”

Serving Runzas. Note the "College is in my Future" t-shirt. Youth Farm gets kids ready for a bright future.