Frogtown Square, the new “transit oriented design” residential and commercial development located at Dale and University, is open for business. A culmination of more than 15 years of effort by a partnership of four local non-profits (Model Cities, Inc., Greater Frogtown CDC, Neighborhood Development Center (NDC), and Aurora/St. Anthony Neighborhood Development Corp) the development already has a waiting list for its affordable housing units, and two of its business tenants are open, with the rest planning on opening soon.

Mihailo Temali, President & Chief Executive Officer of NDC, said construction for the building is “pretty much done” though there is still some work to be completed, such as a large sign. What makes the development unique, he said, is that front of the building comes right up to the street, with parking behind the building. Thus there are storefronts open to the front and back, making the building accessible both to car-drivers and to those who walk or take public transit.

It’s a mixed-use facility, meaning there eventually will be seven businesses underneath 50 units of housing. The housing at Frogtown Square, called King’s Crossing, is owned and managed by Episcopal Homes and offers HUD 202 housing, aimed at affordable and supportive homes for seniors. Lisa Boyd, who manages the building, said half of its 50 units are occupied by Asian American residents, and about one third are occupied by African American residents, with the rest mostly Caucasian residents.

Linh Nguyen, a 70-year-old Vietnamese elder, says she feels very grateful for living at King’s Crossing. Everything is very convenient for her, she said, as she has no car. She heard about the housing from a friend of hers. Nguyen said she loves how new and clean the building is, and in a very short time she has gotten to know the other residents.

All of the business owners are local—though one is a franchise owner of a Subway chain. The other six are local entrepreneurs, all persons of color, many of them who have gone through business training at NDC.

NDC offers a 20-session course aimed at helping entrepreneurs refine their business plans. They learn about management, financing, marketing, and design and layout of their space. NDC also financed a number of the business tenants through loans from the Pohlad Family Foundation.

Two of the new business tenants are Dedrick Young (photo by Sheila Regan, left) and Damen Johnson, owners of The Grooming House, a barbershop that moved into Frogtown Square on March 1 from their previous location just one building over. Young and Johnson have been running The Grooming House since the summer of 2007, and Johnson took part in NDC’s classes, which he learned about from his grandmother, who also went through the program. Johnson said NDC’s classes, were more than anything, about getting organized, about “deciding what you are going to do and how to do it.”

Johnson said he and Young decided to move their business based on the changes planned for the neighborhood, including the light rail. “We want to get in the best position we can,” he said, since when construction begins in their area, they will be battling traffic and construction, which might deter customers from coming. It was a plus that the building had its own parking.

“We really like the neighborhood,” Johnson said. “That’s where our clientele lives.” Another motivator for moving was the possibility of eventually buying their own space.

The Grooming House owners, who gear their business toward men, but who also cater to women with short hair, hope to attract customers as well from King’s Crossing, the residential component of the building. They plan on offering $10 haircut specials on Tuesdays and Wednesdays, and plan on offering more hair care products.

Phyllis Gilliam, who plans to open Sunday’s Best, hopes to open on April 19. She’s moving her store from 459 University, where the store was previously called Just Churchin It. Through the classes at NDC, Gilliam was advised to expand her business plan from just church clothes to formal wear and fashions.

Gilliam said that the new location for her store is a lot more visible. “The place we were was kind of hidden,” she said. “We were inside a Chinese mall. Now people can see the displays and stuff in the window.” Gilliam also hopes to tap into the market of the residents of King’s Crossing. She hopes the senior citizen residents especially will be interested in buying some of the hats that she sells.

Gilliam and her husband, who is a pastor at Bibleway International Church, took NDC’s training last year. She calls the classes “a blessing.” Gilliam has always been an entrepreneur, like her father, but “there was a lot of things I was lacking,” she said. Through training at NDC, she’s learned to dot every “I” and cross every “t”.

Gilliam also received a loan from NDC, which helped her buy new inventory to take her business to the next level. Her new store also has a lot more space than her previous shop. “We lost customers because we didn’t have inventory.” Now Sunday’s Best will have about 4-5 times more clothes.

Atnafu Yeshidagna, owner of Fasika Ethiopian Restaurant, will be expanding his business into Frogtown Square. He plans to keep his current location at 510 North Snelling Avenue open for the time being and “wait and see how it goes.” His main reason for expanding, he said, is that his current location only seats 49 people. “Sometimes we’re so crowded people have to wait for 30-40 minutes,” he said.

Yeshidagna hopes to “add a little culture” in the new location. “We’re looking into art and designs,” he said, so that when people walk into the restaurant, it’s like they are stepping into Ethiopia. The food will be very much the same as the first Fasika location, offering tradition Ethiopian cooking, from mild to spicy, with many vegan options. 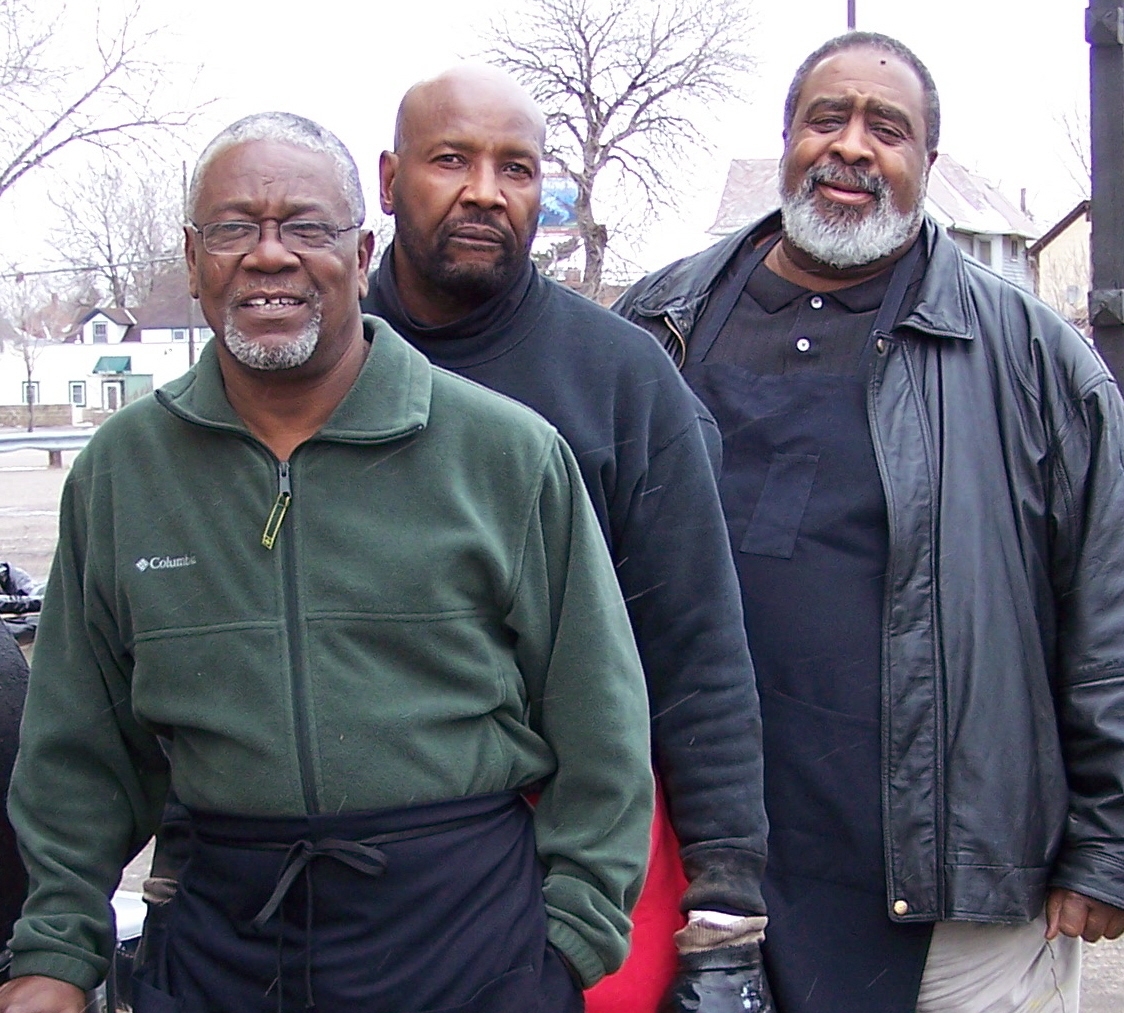 Big Daddy’s, the barbecue operation displaced by Frogtown square construction, will not be a Frogtown Square tenant. They moved less than half a block down the street to 625 University Avenue. Accordin to Temali, “They chose to stay where they are.  We [NDC] own and operate that building also, and they are a long-time borrower [and]  client of NDC’s.” (Photo at left from Big Daddy’s website: Ron Whyte, Bob Edmond and Gene “Big Daddy” Sampson.)

Mihailo Temali said that light rail construction is planned in front of the development in 2012. All of the business owners feel confident and equipped to prepare for that time, and are hopeful that the coming of the light rail will eventually serve their businesses positively.