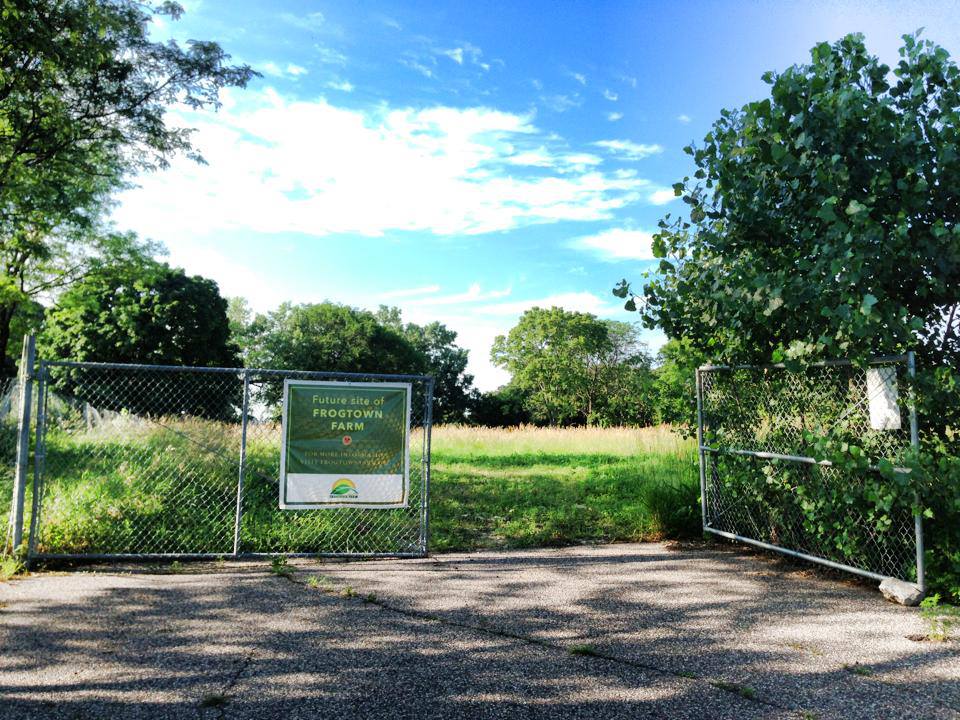 When 70 people come together to talk ideas, to-do lists can get lengthy.

The list went on—a bit overwhelming, perhaps, but a sign that the Frogtown community is invested in the project that’s taking shape on the corner of Victoria Street and Van Buren Ave. With a healthy amount of community input to help it along, design of the long-awaited Frogtown Park and Farm has begun.

It’s a venture that’s been in the works for four years, since the Wilder Foundation made known its plans to sell a 12-acre plot of land in the heart of Frogtown. A few residents came together with a “crazy idea,” as Seitu Jones put it in this 2010 article about the then-nascent project—the idea being to turn the space into a park and demonstration farm. Somehow, Jones and a few other longtime Frogtown residents managed to push the project past the “crazy” stage.

“When we began advocating, we were told this would be a ten-year project,” said Patricia Ohmans, one of the core founders. “Many people thought it would be impossible, the mayor among them. He dismissed our idea initially.”

Within a few years, Mayor Coleman was including the farm in the city budget.

Now, youthful non-profit Frogtown Farm is working with the City of St. Paul and the Trust for Public Land to carry the park and farm from dream into reality. They’ve reached the design phase, and have brought in a design firm based out of San Francisco to help. Rebar’s portfolio encompasses projects from D.C. to Denmark, and ranges from temporary art installations to coastal habitat restorations.

“It was one of the hardest things I’ve ever been a part of,” said Jones, who now chairs the Frogtown Farm Design Committee, of choosing Rebar out of the 19 design teams that applied for the project. “Each team had the capacity to carry this out, but we knew Rebar had a lot of experience in designing farms and working on this big scale.”

The 12.7-acre space will boast a recreation area, a nature sanctuary and a five-acre urban farm. Rebar will focus on design of the farm, looking to examples in Oakland and San Francisco for inspiration. Frogtown Farm will be the first urban agriculture project funded and overseen by the City of St. Paul.

How the farm will look and function is still something of a question mark, to be answered by the target planning deadline of January 2014—but it will certainly play host to programs in food production and distribution, education, wealth creation, community pride and environmental sustainability.

“We’ve done community gardens,” said Anglo, “but this will be the first urban agriculture demonstration site. We’re looking at it more as a resource, an incubator, a community space where people can come and learn and take what they learn back to their own homes.”

The design of the rest of the park is up in the air too, but initial plans include a winter sledding hill and volleyball courts in the summer. Those plans will also be finalized by January after a few rounds of community input, and the city hopes to break ground on some of the basic infrastructure—like lighting and soil remediation—in the summer of 2014.

The park will bring much-needed accessible green space to Frogtown, which is one of the poorest neighborhoods in the city. In 2012 St. Paul Parks and Recreation identified Frogtown as one of only two areas in the city in dire need of a new park, according to this Pioneer Press article. And earlier this summer, we published a map created by Macalester College senior Sarah Horowitz that identified Frogtown as having the lowest amount of green space per child of any neighborhood in the St. Paul.

“After the success organizing the farm, I started looking around and seeing there is a lot of additional vacant space scattered in lots around our neighborhood,” said Ohmans. “Because of the foreclosure crisis many houses were demolished; we have more than one hundred vacant lots in Frogtown. That’s nine acres of vacant land.”

What to do with all of that land became the burning question for Ohmans, who is a Ramsey County Master Gardener with a background in public health. She started shaping projects with healthy lifestyles in mind—like Amir’s Garden, a cultivation plot set on the lot of a house that burned down. Though Frogtown Green is a separate initiative from Frogtown Farm, Ohmans envisions it as a complementary one that will “spread the greening effect.”

“It’s a carryover of the notion that we can do something productive with a vacant space,” said Ohmans. “The vacant lots in Frogtown aren’t going to be filled with housing in the next three years, but maybe we can turn them from a liability into an asset. Maybe we can create solutions that turn Frogtown into a different kind of neighborhood, one where very block has their own space that they have creatively constructed in a different way.” 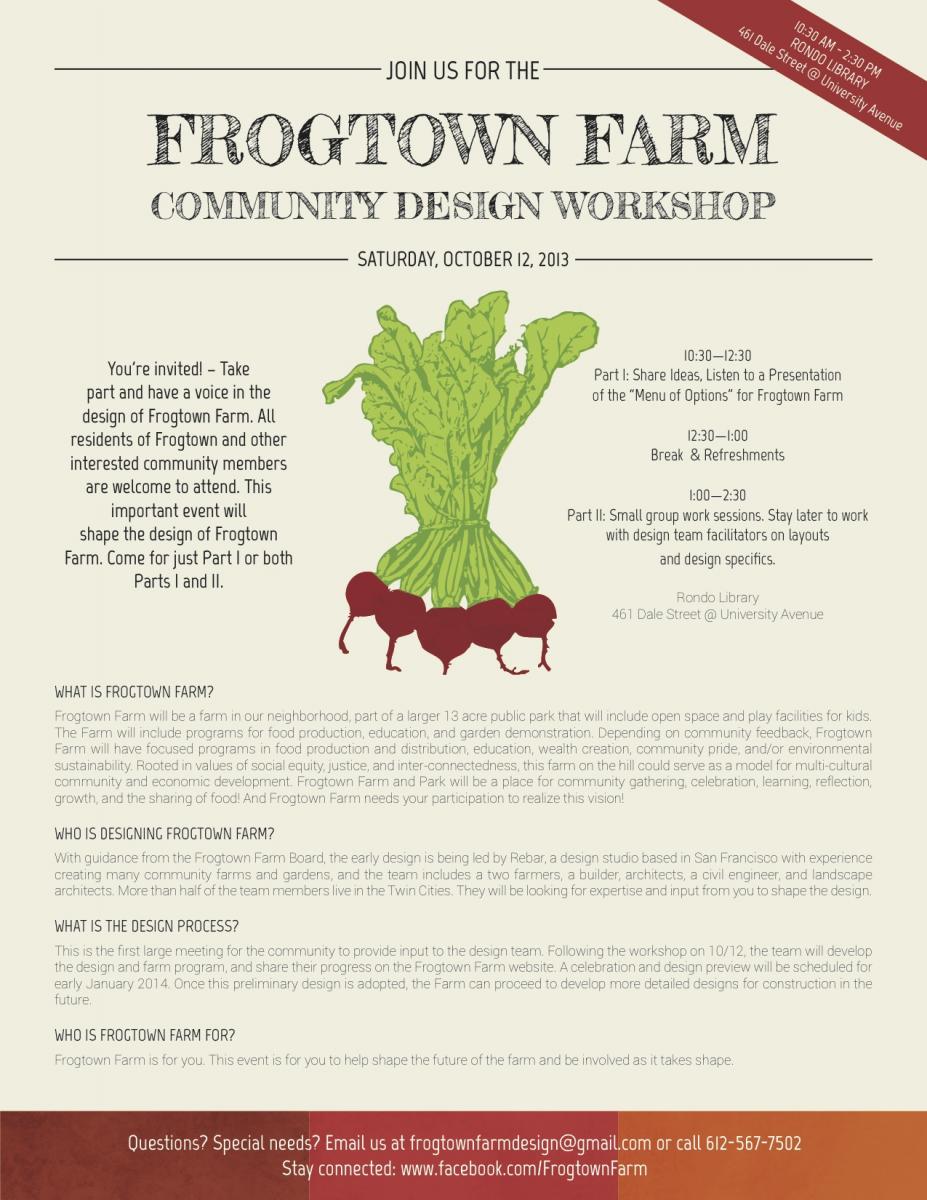 [For full version of flyer for October 12 meeting, click on PDF below.]

Frogtown Park and Farm planners will continue to solicit community input, through the planning process and beyond. Here are some key upcoming dates in the process:

“We really want this to be a community-wide effort. We want to have folks claim ownership, to become stakeholders. It’s important because this is really a neighborhood initiative.” – Chair of the Frogtown Farm Committee Seitu Jones 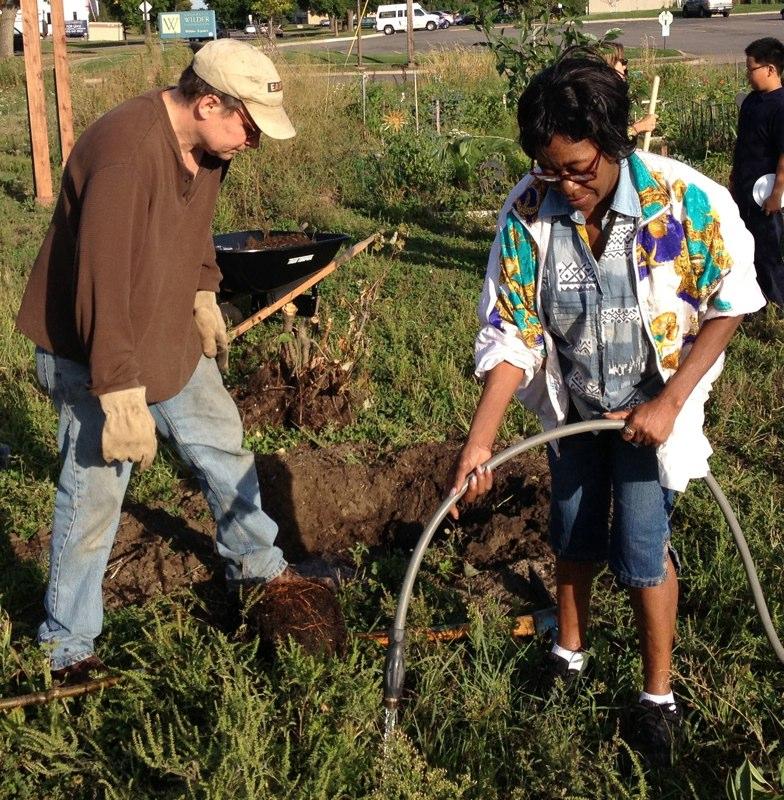 Two Frogtown Green volunteers water the hole where a new fruit tree will shortly be planted at an end-of-the season party at Our Village Garden, a community garden run by Frogtown Green. The garden, in its second year, has 32 raised beds which are shared by residents of the adjacent high rise apartment, youth, and employees of the business that owns the garden land. (Photo by Tony Schmitz) 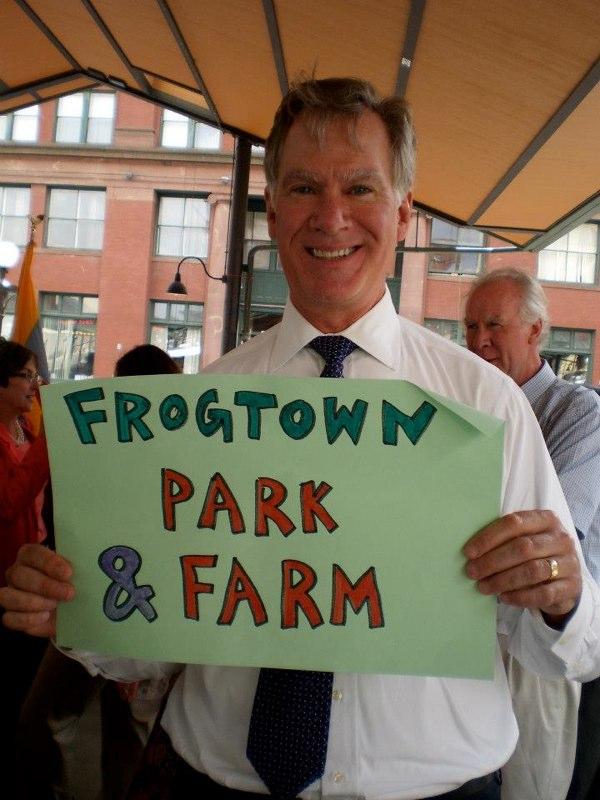