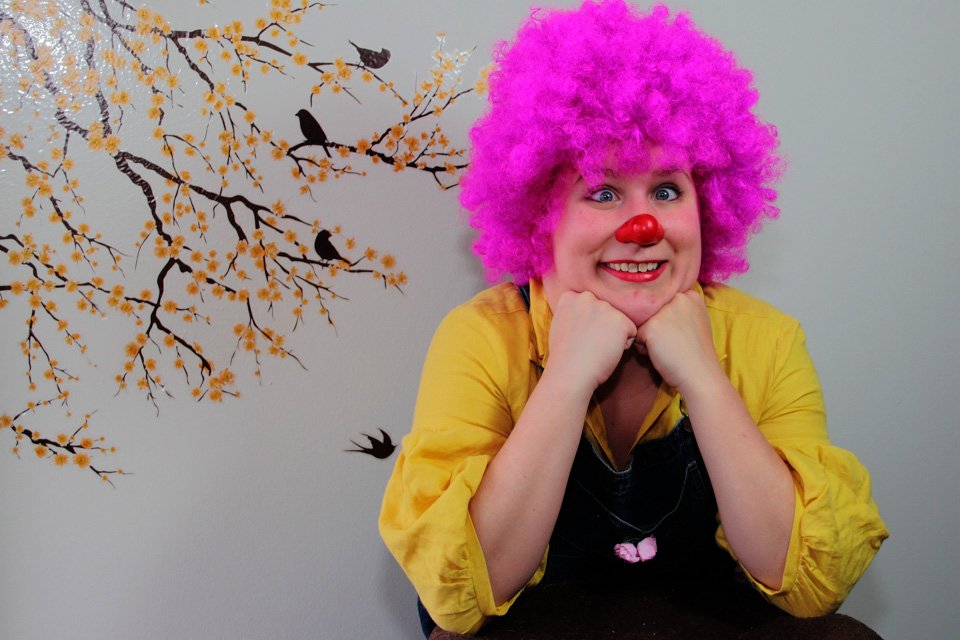 “A motherfudgin’ ninja if ever I met one.”

Don’t Let Them See You Cry: The Failures and Successes (But Mostly Failures) of Daisy Kay McChubbins – If you’re looking for verbally abusive white female clowns who rap, have we got a Fringe show for you! First up, I think being a clown onstage might be one of the bravest things a performer can do. You are practically begging people to laugh AT you rather than WITH you, and then you’re trying to control and somehow ride that response to get the audience where you want them to go. The clown Daisy Kay McChubbins is sporting bright pink hair with a nose, stockings and sneakers to match, in glaring opposition to her bright yellow shirt. Fringe Executive Director Jeff Larson does an admirable job of rolling with whatever oddities appear behind him as he’s making introductions during previews. Just going off audience reaction, he can tell, “OK, something strange just appeared upstage of me.” When he turned around this time to behold Daisy Kay, I wondered “Is he thinking, Oh God, this is my life now?”

Now I’m sure clowns are just like the rest of the general population. 9 out of 10 clowns (performers and/or personas) probably identify as straight. And I don’t mean to, as Allegra Lingo referenced in her preview, “play the gay card” getting all huffy about things being reflexively hetero-normative. Especially since the Fringe is the one time of year I actually have too many options for shows with GLBT content to try and squeeze into only a week and a half’s time. But…

If only in jest, probably because I’m feeling punchy from too much blogging right now, I feel the need to point out that telling someone to “s*ck the d*ck” isn’t as universal an insult as some people think it is. Just like someone calling out “Faggot!” in my general direction is just as likely to make me respond, “Yes, and – ?” as it is to make me fear for my life (it’s most certainly not the insult anymore that they’d like to imagine it to be) – in my younger days, if someone said I should “s*ck the d*ck,” my reply would probably have been along the lines of “Sure, name the time and place.” (These days, the response would probably be “Don’t tease. It’s not polite.”) Now, to my knowledge, I have never s*cked clown d*ck, so perhaps that’s a different experience, like those flowers in a clown’s lapel that squirt water in your face, or a joy buzzer.

Yes, yes, I know, I’m overthinking it. But if you can’t have some fun with a d*ck joke, what’s the point of the Fringe (or for that matter, Shakespeare), am I right? The fact that being confronted with a metaphorical penis isn’t a stinging indictment of my own manhood is probably a good thing to realize about one’s self. In the context of the Fringe, however, this may be a joke that’s passed its expiration date as something you can fling around without any nuance anymore. That said, like a song you can’t get out of your mind, that little rap chorus has been stuck in my head for almost a week now. So congrats on a very effective mind worm, Daisy Kay. You get down with your motherfudgin’ self and have a lovely Fringe.