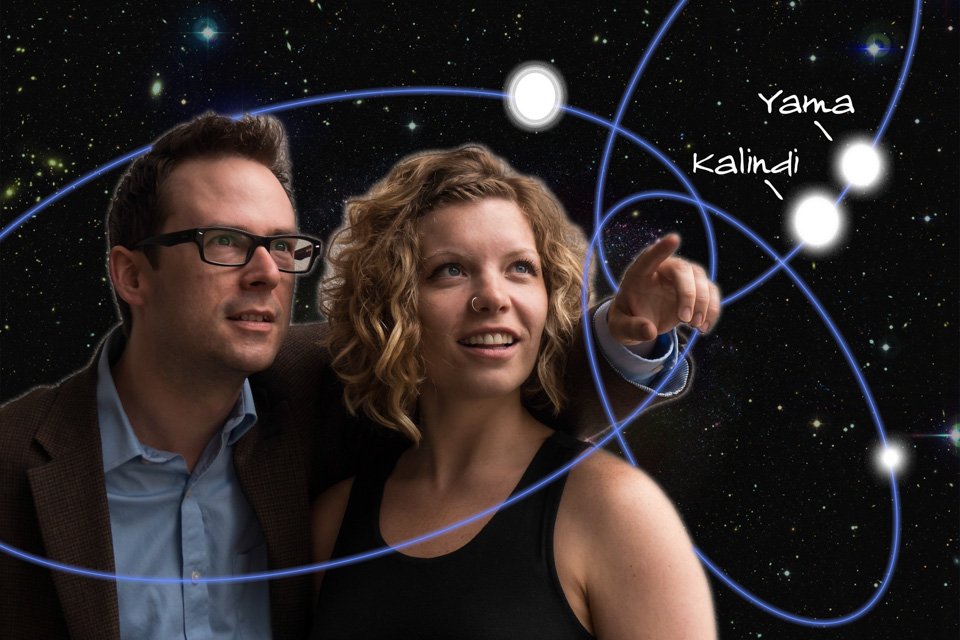 Alternate universes and romantic comedies have been crossbred before (not to mention time travel and doppelgangers), and it often makes for interesting viewing (The Double Life of Veronique, Sliding Doors, countless sci fi TV shows, etc.). It’s all based on the big “what if” – what if I’d turned right instead of left, what if I hadn’t been late for the bus, what if the alarm clock never rang, what if I’d never met that person, or never let them go? The latest entry in this sub-genre is Hey Rube’s Fringe 2014 production of Marcus Anthony’s new script Yama and Kalindi: A Transdimensional Love Story.

The story’s operating on (at least) three levels here. The subplot threads include: the ancient tale of lovers Yama (Antonio Duke) and Kalindi (Jessie Scarborough-Ghent), and how death was brought to the living creatures of the earth; and in the movement of celestial objects, how two binary stars named Yama and Kalindi are in danger of being sucked into a black hole in space. The movement of those stars around that black hole is the singular obsession of Alan (Clarence Wethern), an astrophysicist who wakes up in a hospital after a blow to the head not knowing how he got there. To make things weirder, he was found in the ruins of an ancient temple in the mountains of Nepal and shipped back to the U.S. for his recovery. His only visitor at the hospital is Margo (Alyson Westberg), which makes things a little awkward. Because Alan broke up with Margo and just forgot to remove her as his emergency contact – something Margo remembers all too clearly, but Alan doesn’t at first.

Alan and his scientific sidekick Thomas (John Dahl) discovered the imperiled binary stars of Yama and Kalindi circling the black hole and figure it’s going to be their big break into the next level of the science biz. But first they have to get their scientific mentor (also Duke), the man for whom they work as graduate assistants, to give them access to the high tech equipment they need to see and document the big celestial event. Alan has trust issues with, well, pretty much everybody, and this is the personal failing that sends both his relationship with Margo and his scientific work with Thomas spiraling off in a variety of different directions, only a few of them good, all of them complicated. (I should mention the cast also includes Ilana Kapra in multiple roles offering a number of amusing moments I won’t spoil here.)

Yama and Kalindi hops not only back and forth in time, but hops off from familiar key plot points into alternate versions of reality and back again. It’s an ambitious project and it almost works, thanks to the hard working cast and the tag-team directing by Marcus Anthony and Kirsten Stephens (who guided a lot of the physical theater work, since many elements are mimed rather than literally present – and then there’s the whole dance of the planets thing to be made manifest on stage).

The main obstacle to the storytelling right now isn’t the complexity, it’s the structure. The movement of the stars and the glimpses of ancient myth all actually work very well. The present day multiverse is the tricky part. Right now the play seems to be straining to make the quick cuts that are more the province of film or television, rather than being crafted as transitions that take advantage of the kind of things one can do onstage. Theater can do anything, and thanks to the audience’s imagination, it can do almost anything with almost nothing. But the storytelling needs to make full use of that fact, and right now parts of the script seem to be trying to figure out precisely what those transitions are (and there are a lot of them).

A sense of how much time has passed in the present, and even what timeline we’re specifically on in any given moment can be a little fuzzy (some which could be deliberate). The actors always seem to know where they are, but as an audience member, I sometimes needed more clues. The other issue I struggled with was, “Who am I rooting for, and why?” Yama and Kalindi, both the ancient personages and the stars, seem to end up all right, so again it’s more an issue for the present day people. Thomas is clearly a supporting player, though always a welcome one to see. Alan seems to be our lead, but in most universes he’s a bit of a jerk. Not that your protagonist can’t be a jerk, but it would be nice if the bonk on the head in the temple in Nepal actually knocked some sense into the guy. Margo, like Thomas, is the very definition of long-suffering, as I’m sure most people around Alan need to be. I needed more of a reason to want them to get back together, instead of wanting Margo to kick Alan to the curb. Or to understand it somehow as Margo’s story, if that’s the case, and then my hoped for outcomes all become slightly different (but the story of the play seems to be leaning more toward Alan than Margo right now, so that’s the way I had to process it).

I also found myself wanting to understand a little more about black holes, binary stars, and just how unusual this kind of event out in space was. Everyone in the play seemed to think it was a big deal, and it sounded like a big deal to me as well. But I don’t know enough about astronomy to know if such a thing has ever happened before, or is even likely, and if so if anyone has ever seen it happen and been able to document it – or if this moment in the play would be as groundbreaking as the play makes it out to be. Also, how does such detailed observational work progress, and how do personal relationships complicate that, or vice versa? (Coincidentally enough, another play in the very same Fringe venue of TRP – Fifth Planet by David Auburn – deals with some of these very issues.) Conversations between Alan, Thomas and Margo, in any sort of combination, could easily solve that knowledge gap for me. And I’m not talking exposition – it could be used as anything from first date conversation to pillow talk to a break-up argument to friends talking brutally honestly to one another. In a play this complex, every line needs to serve at least a double if not triple purpose. It’s something the writer seems capable of, given the current state of the script, which is a lot more literate and focused than some new plays out there.

Plus, if you’re going to have a plot line that explains how death came to humanity, much as I don’t like to see characters die randomly for no reason, it seems like a missed opportunity not to have somebody die in the present day plot line. After all, with an assortment of universes to choose from, they could all take turns dying, for various reasons, and the play could resurrect them on another time line and not be cheating death at all. Right now, Alan’s personal life and professional life all get multiple shots at crashing and burning or reaching the heavens. Actual non-metaphorical life and death situations don’t seem like a big leap – particularly given the ancient plot line that forms part of the foundation of the play.

All that said, I always prefer plays that aim high and maybe still have some climbing to do instead of ones that aim for mediocre and nail it on the first try, so for that reason I’m very glad I went. The Fringe is a perfect place for gestating a new play this ambitious. Right now Yama and Kalindi is fun though some times befuddling. I’d be interested to see how it turns out in its own alternate universe.