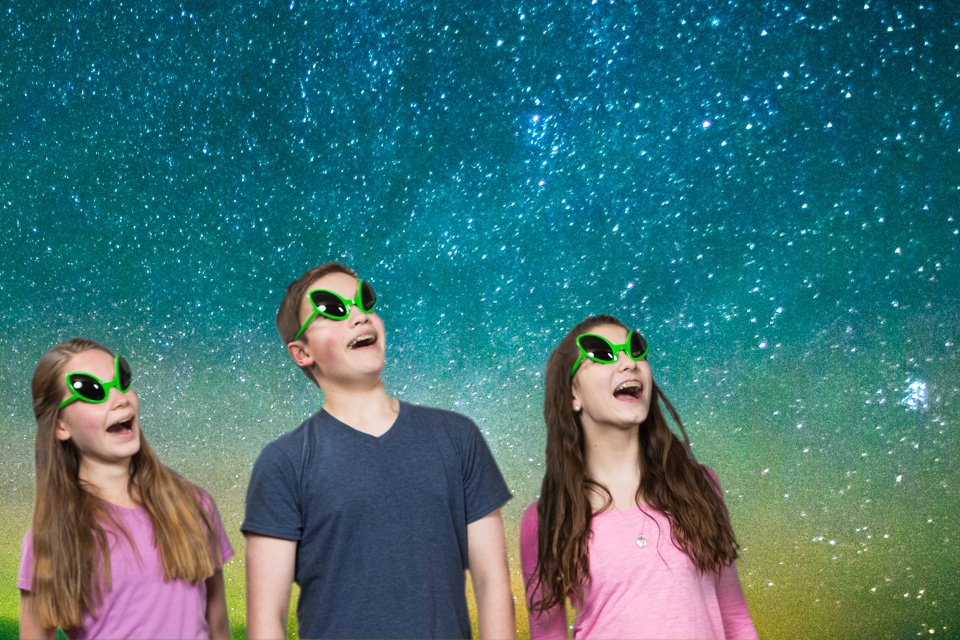 I’m genuinely torn over how I feel about A Very Merry Unauthorized Children’s Scientology Pageant. It’s comes to us with an established pedigree. It’s not a musical that’s original to the Minnesota Fringe Festival, it’s over ten years old. It’s an Obie Award-winner from off-Broadway in New York, it won awards for its Los Angeles production and gets done all over the country. We used to have a big Scientology storefront for many years on Nicollet Mall in downtown Minneapolis though it’s long gone now. That thought makes me feel like we’re kicking a religion when it’s down.

Now, there’s furious debate, of course, whether Scientology is a religion at all, or if it’s just a big money-making scam. As the musical recounts, L. Ron Hubbard founded his own church in the 1950s based on his assessments of the human brain and how it might be cleansed to relieve people of bad memories that might be holding them back from achieving their full potential. Followers’ unquestioning devotion to this self-help, motivational concept to the exclusion of their own family and friends and to the detriment of their bank accounts makes outsiders worry that it’s a cult, or a fraud, or both.

The concept of A Very Merry Unauthorized Children’s Scientology Pageant is to present the basics of the L. Ron Hubbard story through the eyes of children. It aims to imply that people following Scientology blindly are like far too trusting little kids, easily led astray. It also posits that maybe shutting off our emotions isn’t the best way of coping with or learning from our problems. Perhaps you can’t buy your way to happiness or salvation. Perhaps the people who are selling you this bill of goods don’t have your best interests at heart and you should be examining them a bit more critically, like an adult rather than a child.

The young performers here are great. They’re completely devoted to the concept, and present the shiny happy cult story with unnerving sunshine and happiness at all times. Ethan Davenport as L. Ron is a hoot, and Jillian Jacobson as his angelic guide is adorably unsettling. The ensemble of Bella Blackshaw, Tatum Geving, Lillie Horton, Chase Kozak and Zel Weilandgruber do a great job all playing multiple roles – from John Travolta and Little Orphan Annie to L. Ron’s mom and dad to stereotypical representatives of cultures from Hawaii and New York to China. Their slow motion reenactment of war time is both funny and really not funny, in all the right ways. The cast still sometimes needs to remember to project, but other than some volume issues, the performances were exactly what this sort of pageant is supposed to be. It’s not supposed to be too slick or too professional. It’s just enough to be impressive, while still seeming like a kids show somebody threw together for church.

Here’s the thing – as weird and unnerving as this children’s pageant is, where does it leave us? One could make a similar argument against the Catholic Church or Mormons or Christianity in general. Every religion is based on some pretty wild leaps of faith, and there have always been people more than happy to profit off of other people’s belief. So, okay, unquestioning devotion to a belief structure can be problematic. It can lay you open to all kinds of abuse. And your point is…? So we should…? It’s as if the show is leading us right up to the edge of a hard question, and then saying, “OK, good luck, thanks for spending time with me, see ya!”

Now, sure, it’s entertaining, and maybe that’s all it needs to be. But because the people behind it are smarter than that, and the people producing it are more talented than that, I’m expecting there to be something underneath the sparkly surface. As with many pieces of theater, perhaps I’m overthinking it. I had a similar response to seeing producer Max Wojtanowicz’s own Shelly Bachberg Presents: How Helen Keller and Anne Frank Freed the Slaves: The Musical last year in the Fringe. It was intelligent and hilarious and lavishly produced and neatly skewered the notion of politicians who screw up the facts of history (accidentally or on purpose) to suit the needs of their own careers and quests for more power.

But just like the Scientology pageant, it’s a one joke premise. It’s an extremely funny joke and one you can spin off into all kinds of different variations. But if we just turn a problem into something that we laugh at, are we letting it (and ourselves) off the hook. Does it inoculate us against actually doing something? Or worse yet, lull us into a false sense of security that if someone or something is laughable, it can’t possibly do us harm? Or as long as someone or something is making me feel good and providing me with entertainment, it seems trustworthy enough to put in charge of things that really matter to me? Sticking a pin in the Scientology balloon or putting a banana peel under Michele Bachmann’s feet is certainly a first step. Perhaps that’s all we can really ask of anything. That it draw attention to a problem. I don’t expect art to solve the problem. That’s our job outside the theater. I guess I’d just like art to motivate me a little more – appall me, anger me. That may be more than one little musical should be asked to do.

The kids are great. The show will make you laugh. And if, like me, it also gets under your skin, that’s probably a good thing.