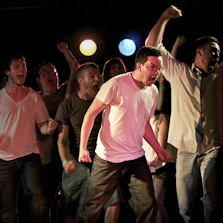 Red Theatre worked hard for every one of the five stars in this review. My defenses were way up on this one. I was afraid I’d end up having to write a review in which I’d need to struggle to avoid using the word “pretentious” because, well, honestly, this…

“We take a wrecking ball to the fourth wall replace it with a mirror, blurring the lines between performer and audience, fact and fiction. It’s bold, funny and poetic. It’s Hamlet with a new heart and mind.”

I was seeing Red Hamlet for the wrong reason – because it happened to be in a venue I was going to see another show in, and staying put to see this show seemed safer than trying to hoof it somewhere else. And the first night, I just can’t bring myself to skip a slot on the schedule on the very first night of Fringe.

“I think I just saw a ghost. And I don’t believe in ghosts.”

But as much as I was already suffering from Shakespeare overload and, more specifically, Hamlet fatigue, part of my brain rebelled against the very concept of the production. Because I had utterly misinterpreted the concept of the production. In the back of my mind I was thinking, “If you’re going to do Hamlet, then do Hamlet. If you want to do something else, then don’t pretend you’re doing Hamlet, ride on Shakespeare’s back only partway and then hop off. It’s annoying.”

But they’re not doing Shakespeare’s Hamlet. One of the beauties of Red Hamlet is that you need to know exactly nothing about Shakespeare’s version and it still works as a tremendously entertaining, and ballsy, piece of theater. (If you happen to know even a smidgen or more of Hamlet, well then there are copious little bonuses scattered throughout this one for you, the best of which is that you can tally up all the many ways that this is completely unlike any normal Hamlet you’ve ever seen. I was.)

“The scenery is not yet dry.”

“Then you won’t need to drink as much after chewing it.”

Also, if you’re familiar with Abbott & Costello’s classic “Who’s On First?” comedy routine, or the words of Yoda from “The Empire Strikes Back,” or the ominous greeting of Inigo Montoya from “The Princess Bride” – there will be pleasant goofy surprises for you as well. But Red Hamlet is its own beast. Producer/Director/Writer Aaron Sawyer and his merry band of travelers sure know how to put on a show.

“I would say goodbye, but you are already gone.”

They assembled and dismantled Robbie Jones’ set in record time – a full stage with functioning red curtain, steps with secret compartments, and a rug that unfurls to give the illusion of a black and white checkerboard parquet floor. Half the actors pull double and triple duty performing multiple characters, making the ensemble of nine often seem larger than it is. The other intriguing thing is that this group out of Nebraska somehow managed to fully integrate three of our own local Twin Cities actors (Stacey Poirier, Randall J. Funk, and David Lind) into their ensemble as if they’d always been playing Gertrude, Claudius and Polonius (respectively) for Red Theatre. No easy trick there, and I only stopped to think about it after I’d seen the show. That’s how well they all play together.

In this version of the story, Prince Hamlet (Gage Wallace) is still grieving for his dead father (represented much of the time here by a vase with a single flower in it). Far from being sad that Hamlet’s father is gone, however, Queen Gertrude and new King Claudius both feel like they should be congratulated for ridding their kingdom of a tyrant. Hamlet still loves the young Ophelia (Kara Davidson), though her father Polonius and brother Laertes (Steve Hartman) keep interrupting at the most inopportune moments. Hamlet’s school buddies Rosencrantz (Aaron Ellis) and Guildenstern (Jeremy Short) still drop by to play the board game “World Conquest: Elizabethan Edition.” Meanwhile, the vengeful Fortinbras (Colin Ferguson) draws ever closer to the preoccupied kingdom of Denmark. Hamlet doesn’t want to start killing people, but once he gets the confirmation he feels he needs of Claudius’ guilt, bodies start falling.

If you know how Hamlet ends, you still don’t know how Red Hamlet ends. Where’s Hamlet’s closest friend and confidante Horatio, you ask? Replaced by Ophelia, to a large extent. The expanded role of Ophelia, and the centrality of the problematic romance between Ophelia and Hamlet amidst the palace intrigue, is a major strength of this production. Because they are writing a new script, not slavishly devoted to its source, no one gets a skimpy role full of holes for which they have to make up excuses and paper over. There’s no archaic phraseology the actors or audience need to struggle to understand. Nope, everyone’s a well-rounded human being with their own agenda, speaking perfectly understandable, yet still poetic, modern English, and the plots and subplots all dovetail quite nicely into a package lasting less than an hour. Oh, and a sense of humor. Everyone has a sense of humor. Huge bonus there.

“I think now I could be king.”

The script’s way with language is often stunning. The cast’s finely timed interactions in word and deed bounce between being achingly human and highly stylized with nary a hiccup. This thing is a real kick to watch.

But we are not just passive spectators. Audience interaction, always fraught with danger, is nimbly handled, mostly because the cast really is treating the members of the audience as another acting partner. Spectators in chairs aren’t treated as props. The actors make eye contact, they assess. They don’t hold back, but neither do they abuse their position of power.

And I say this even though they tossed a glass full of water at my mother and me. Then Hamlet and one of the troupe of actors visiting the palace (Jeremy Short again), climbed up into the audience and perched on chairs right in front of my mother, making her the focal point of another exchange. Mom, ever a game Fringer, engaged by making faces. Knowing they had a willing accomplice, they focused all their attention on her and didn’t spare me a glance. But you could see it in Short’s eyes, right before he tossed the water at Hamlet’s instruction, he was gauging just how far to toss it, so it would splash us, just not in the face. (Good arm, by the way.)

Red Theatre‘s Red Hamlet took everything I was convinced I didn’t like about Fringe shows and turned it on its head and made me love it. After seeing this, I really wish they were local. Since they aren’t, get your butt over to the Minneapolis Theatre Garage and see Red Hamlet while you still can. It’s great stuff, you don’t want to miss it.