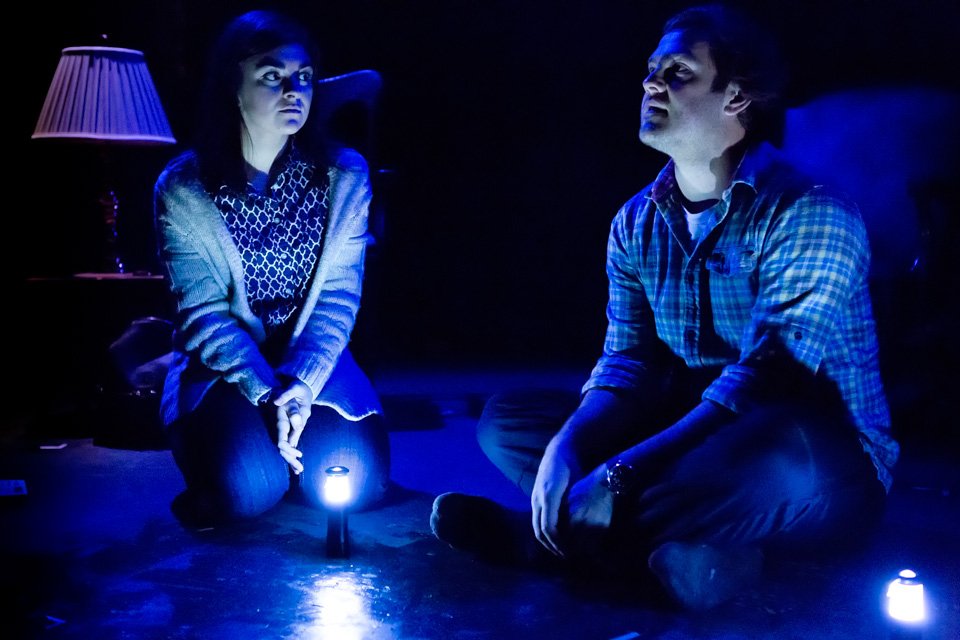 The theater company and director and writer who brought the Minnesota Fringe Festival Sousepaw in 2011 are all teaming up again for a very different two person play this year, Real Dead Ghosts. Playwright Johnathan A. Goldberg (who also brought us 2012’s screwball noir comedy Font of Knowledge) has set this latest Fringe offering not in the past but the present (or at least an ever-shifting version of time grounded in the 21st century).

Married couple Amber (Lara Hillier) and Graham (Nathaniel Kent) are on vacation trying to mend their frayed relationship. They are a study in opposites – Amber: highly organized, tightly scheduled, hard-pressed to untether from her cell phone; Graham: slightly aimless and unconcerned about it, on the surface. The love that binds them together and keeps them trying is also the bond that makes them a little crazy, giving them the unwanted power to hurt each other. All of which sounds like a conventional comedy-drama about relationships, but it’s not.

To talk much more about the unusual structure of Goldberg’s script would be to give away too much about what makes Real Dead Ghosts unique. The best way I can think to describe it is that it’s what would happen if you fused a script from The Twilight Zone with one from The Gilmore Girls. That doesn’t sound like it should work, but this is Shelby Company, so it does. It’s not really a shaggy dog story, but it could feel like one. It’s not really a supernatural mystery where the point is to figure out exactly what’s going on. Honestly, when you’re clear on what’s happening, it only makes it plainer that these are two people who are never going to give up on one another. You can only hope that it will somehow, someday, allow them to be happy. (And if you never figure out precisely what’s going on, well, the nice thing is that the play and the performances give you an entertaining and engaging exploration of a marriage going through a rough patch, not because the two people don’t love each other, but because they do.)

Director Courtney Ulrich keeps the production moving along, and makes sure that the performances take full advantage of the give and take Goldberg has built into the script to keep this two person show from never bogging down or getting repetitive. When two characters and their relationship and history together are this rich, you don’t need more than two good actors to make the time feel full and satisfying. Real Dead Ghosts is another unique personal offering from Shelby Company to the Minnesota Fringe Festival community. Like all the Shelby productions that have come before, it’s unlike any that preceded it. But it’s exactly this kind of show that makes us happy they come back year after year.