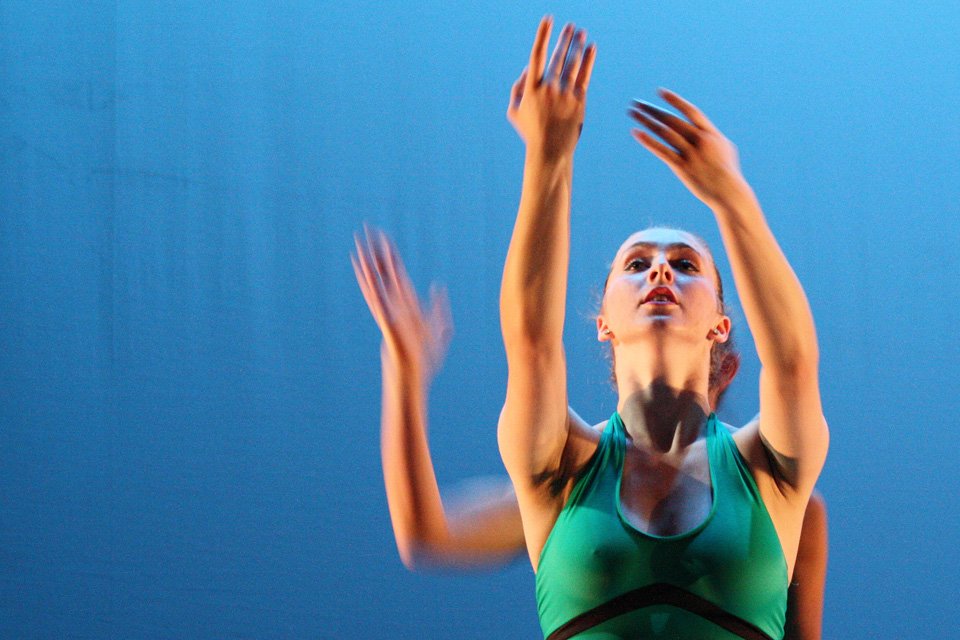 One of the many things for which I have to thank the late John Munger for is opening my eyes to all the many opportunities to see different kinds of dance at the Minnesota Fringe Festival.  If he hadn’t, I’d probably have missed all kinds of wonderful shows over the last several years. Persons Unknown from the Saint Paul Ballet would be one of them.  So, thanks, John, for not letting me miss this one.

Basically when I’m loading my schedule on the Fringe website, I just load in all the dance shows as a starting place, alongside the many other plays and performances.  If for some reason, there isn’t a play I’m interested in seeing at a particular time, chances are there’s more than one dance show being offered and I can check that out instead.  Makes the Fringe a lot more fun that way.  Plus I start learning about particular companies and if I like their show, I’m more likely to actively seek them out the next year they appear at the Fringe.  (One always hopes that I’ll catch more dance outside the Fringe during the rest of the year, but baby steps…) One of the companies I’ll be looking for in the future is Saint Paul Ballet.

Persons Unknown is a hopelessly generic title, but then I saw it was dance and went, OK, let’s poke around and see what else I can learn.  They wisely did a little video trailer filmed at their first performance and posted it on the Fringe site, so I got a quick sampler and thought, sure, that looks fun.

Better than fun.  Good dancers constantly amaze the heck out of me.  I often have trouble just walking from one end of the room to the other.  These people are actually graceful.  They have full control over their bodies.  They make humans look really good as a species.  So it makes it even more charming when you discover that they like flopping around wildly and having fun, too.  (They just do it so much more fluidly and precisely than the rest of us.) [And yes, in case you were wondering, the whole company is one big male and female Whitman Sampler of eye candy – enjoy.]

Persons Unknown mixes the techniques of ballet and modern dance throughout the evening and it’s a real kick to watch.  Their opening number “Hounds of Love” is set to the tune of Kate Bush’s song of the same name.  While two of the dancers perform a more standard ballet male-female dance pairing, four other female dancers in tutus are rocking out around them.  Dancer/choreographer Nina Joly also choreographed two comic dance interludes for Preston Stockert, one right after the opening number and one right before the closer.  Gives the other dancers time to change and means one less pause in the action where the lights come up for the audience to peruse their programs.  Plus, Stockert can be just as goofy there as he is serious in the other dances in which he performs.

Preston Stockert later takes the choreography reigns for “Attainability, Affirmation and Inquiry,” setting a trio of dancers in motion – Brittany Adams, Nicole Brown, and Artistic Director Zoe Emilie Henrot.  Decked out in white, they perform in alternating patterns of one dancer alone, the other two as a unit.  Watching the different combinations ebb and flow was quite lovely.

In “Hats Off,” dancer/choreographer Jarod Boltjes stages a tango with Amber Genetzky, she in a slinky black dress, him in a black vest and slacks, both with a fedora on their heads.  There’s some repeated non-verbal negotiation throughout as to who gets to wear a hat (perhaps analogous to the old “who wears the pants in the family” or in this case on the dance floor).

Genetzky later stages a ballet/modern combo to the acoustic warbling of Ed Sherran’s song “One” – a lot of amazing stretching and spinning (good Lord, the control these people have to stay perfectly in balance).  Genetzky, Boltjes and Stockert joined here by Joanna Lowry, Michelle Ludwig and Jacqueline McDaniel.  Everyone in grey tights, the women with a little splash of orange for their gauzy skirts.  The whole thing ends in a tableau that’s as striking as it is simple.  Beautiful.

Dancer/choreographer Amy Trayers tackles the subject of mental illness through movement in “Emotional Alchemy.”  Dark outfits, probably navy blue, with bright red bands around the head or abdomen of each of the dancers – Adams, Brown, Henrot and Trayers, with Boltjes or Stockert alternating performances as the lone male in the number.  Darker lighting, more dancers in isolation from one another, reaching out, trying to speak, ultimately freeing themselves from the red accent.  Symbolic but not overdone, a really interesting piece of thought-provoking movement.

Dancer/choreographer Micah Chermak danced in his own piece “Impetus: Red” but first put fellow dancers Shannon Corbett and Michelle Ludwig front and center for the opening section of the dance.  He stepped in later.  The stunning thing to watch about this dance, full of limbs, both arms and legs, taking abrupt right angles throughout, was the synchronization of the three performers.  Yes, that’s a hallmark of all good dance, but I couldn’t help being doubly impressed when one or more of the dancers broke off into their own routine and then would suddenly return to moving in unison with another dancer in the trio.  (Again, dancers regularly turn the human body into something that baffles and amazes me.)

The women of the company all took to the stage together for the final dance, “Nadine,” choreographed by Artistic Director Henrot.  One dancer moving to her own rhythm slowly manages to touch, directly or by proxy, every one of the other dancers moving in pairs in a more regimented routine.  Little flashes of shared independence break out all over and get incorporated into the main dance.  It was fun to track the progress of change.

After the whole company took its bows, they all starting bopping along to a modern tune on their retreat from the stage.  Even rocking out, they’re more graceful than you or I.  But it is fun watching their humanity break out from under all that professionalism and control.  The new order in the Saint Paul Ballet is that the artists have taken the reigns of leadership in running the group and creating new work, providing opportunity to a new generation of choreographers in training.  If their Fringe show Persons Unknown is an example of the result of that new way of doing business, they’re definitely a group I want to see more of outside of Fringe season.