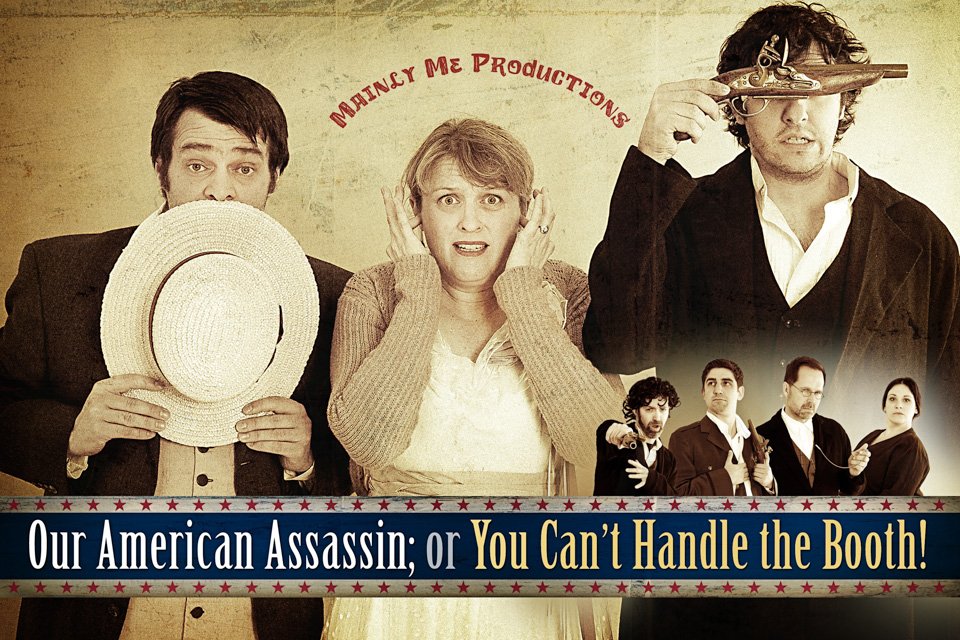 I almost don’t know what to say about Josh Carson anymore. Should you see Mainly Me’s latest comic freight train Our American Assassin, or You Can’t Handle The Booth? Only if you want to laugh your ass off for a solid hour. Sound good? Then get your ticket because they’re packing the house full right from the first performance.

So Josh Carson and Andy Kraft came up with the thought that it’d be a great idea to do a comedy about the assassination of President Lincoln. Too soon? It’s been almost 150 years, get over it. So Josh went off and wrote it. And directed it. And performs in it. All of which, in other hands, would make something like this a cringe-inducing train wreck. But Josh Carson is not your average Fringe artist. What we get instead is damn near brilliant.

The premise is that the actors onstage performing the play when Lincoln was murdered are the real victims here. The assassin John Wilkes Booth was himself an actor. Acting and theater will be vilified for all time for their role in the killing of the President. Unless the actors can somehow find a way to bring Booth to justice themselves and become heroes instead. This is a mission for which they are completely unprepared, and a mission which they botch in about two or three dozen different ways. The mistakes snowball in hilarious fashion as the cast of characters around the actors’ crusade grows increasingly odd and menacing.

And yes, because this is the overly enthusiastic Mainly Me Productions, they appear to be trying to break new bones in Andy Kraft’s body, as well as what little scenery and props they have. And if you thought they might take a break from mocking the Executive Director of the Fringe Festival since Jeff Larson is only just starting and this is his first festival – think again. Our American Assassin is the best kind of Fringe comedy – it’s tight and intelligently written, it’s directed at perfect pitch and pace, and it’s performed by a skilled and relentless ensemble of clowns that understand comic timing in a way that few others do. It’s almost not fair throwing other comedies up against this one, but it’s always nice to have a really great show in the Fringe to help raise the bar for everyone else – and not just in August. I rarely get to see things this funny the rest of the year. If you’re in a need of a laugh, this one’s guaranteed. Go.