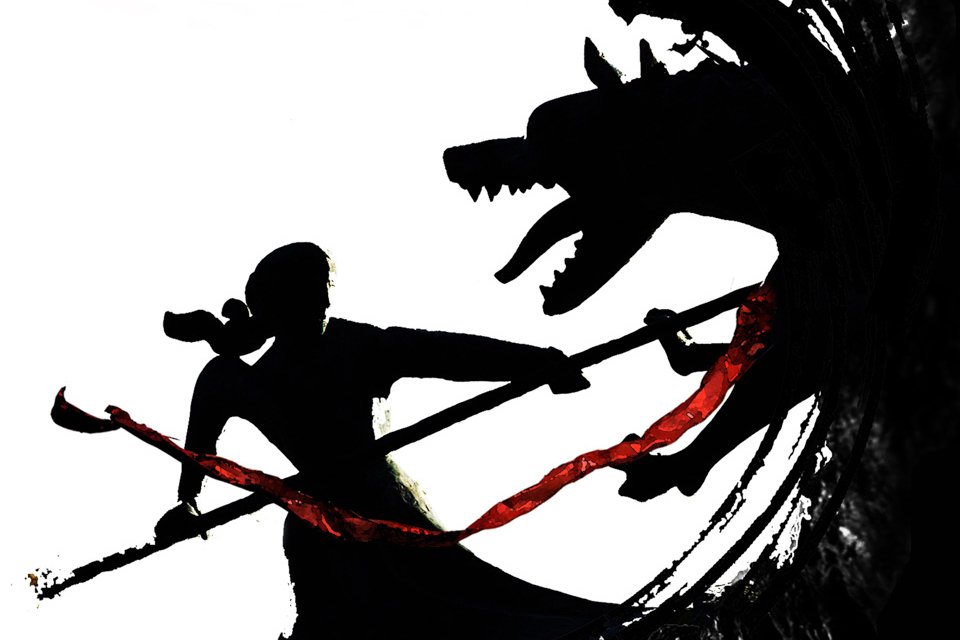 Sandbox Theatre has grown so adept at doing so much with very little that it’s easy to take something as accomplished as Marie-Jeanne Valet Who Defeated La Bete du Gevaudan for granted. That would be a mistake. Thankfully, the audiences of the Twin Cities don’t look likely to take the skillful storytelling of Sandbox for granted any time soon. It’s probably because, all theater trappings aside, audiences enjoy a good adventure story, or a good monster yarn, well told. Few tell them as well as Sandbox.

Marie-Jeanne Valet Who Defeated La Bete du Gevaudan is four actors (Megan Campbell Lagas, Theo Langason, Derek Lee Miller, and Heather Stone, directed by Amber Bjork), some bolts of cloth, some sticks, some cut-out puppets, a drum, a trunk, a rolling wooden box, and a handful of costumes (by Kristina Fjellman). That plus the actors’ bodies and voices creates an entire world. A comically grotesque world, a brutally realistic world, and a world where things aren’t easily explained – all wrapped up in one. Sure the title may be largely in French, but the storytelling is instantly accessible – friendly and wry and silly.

The destitute citizens of Gevaudan are beset by murderous attacks from a ravenous giant red wolf they name La Bete (The Beast). Despite two different contingents of soldiers – one competent, the other less so – the meager help sent from the King of France does nothing to stop the wolf. Ultimately, it is a young peasant girl Marie-Jeanne Valet, who lost her entire family to attacks by the wolf, who helps to track and mortally wound the beast. But of course, she can’t be recognized for such a feat of daring and strength. That wouldn’t fit the narrative the King wants to project to his people.

Sandbox has also gotten very good at tucking crafty political messages deep inside the tales it spins. They don’t scream them loudly, so they’re not so easy to dismiss. They’re in the meat of the story. They’re the thing that follows you outside the theater. Set it in the past. Set it in another country. It couldn’t possibly have anything to do with us, right?

Marie-Jeanne Valet Who Defeated La Bete du Gevaudan takes place in France 25 years before the French Revolution. By the time the story is over, the revolution is one year closer. The story of Marie-Jeanne Valet is the story of a government that can’t or won’t provide for the safety and well-being of its people. It’s the story of a people who ultimately have to fend for themselves. When people are left to fend for themselves, realize they have their own power, and the government seems to serve no purpose, well… wouldn’t it be nice to think that’s a lesson we’ve already learned?

(And catch Sandbox’s new musical Killer Inside at Red Eye in November, and the remount of Sandbox’s wonderful War With The Newts at Park Square next May, and in the meantime, consider signing up for ArtShare at the Southern, where Sandbox (among many other great local theater groups) is going to be a resident company starting in January 2015 (I did). In my opinion, you can never have enough Sandbox. I keep thinking I have, and then they keep serving me a good time as an audience member, so I keep coming back for more.)