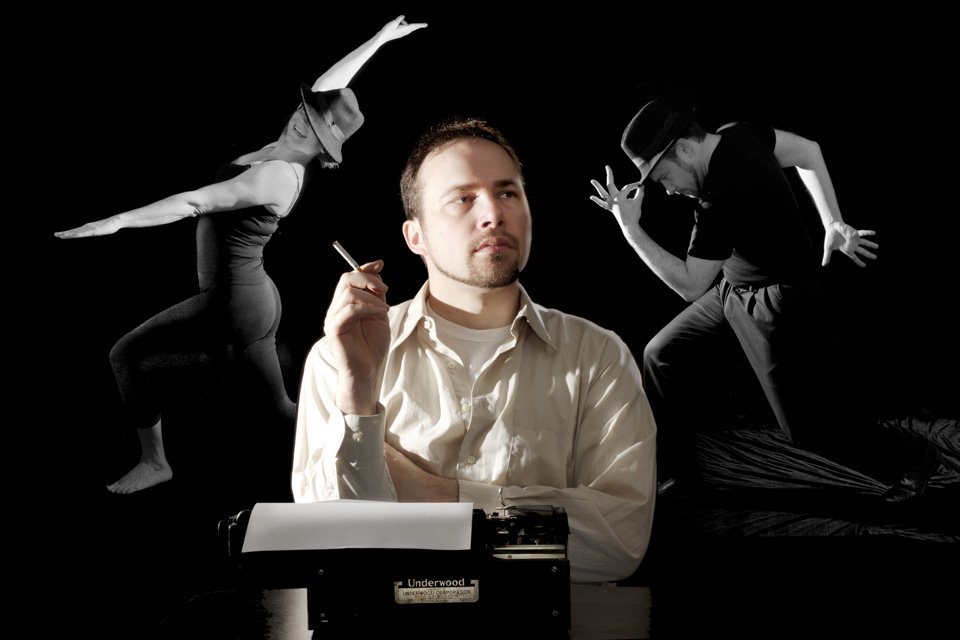 You know how when we put kids on stage, often, our critical faculties go right out the window? Because you see them up there, and they’re adorable, and honestly, who cares how perfect or imperfect it is? They’re up there, on stage, doing something they almost never do, so you’re brimming with pride and appreciation, and you’re just amazed and happy it’s happening at all? Oh, and if someone is actually, objectively, really good? Well, damn, that’s a miracle. That’s kind of what watching Jumpin’ Jack Kerouac feels like.

Jumpin’ Jack Kerouac’s mission statement could be summed up thusly – get writers onstage, and make them dance. Producer/choreographer Windy Bowlsby does that in a series of nearly a dozen different dance pieces that highlight all of her dancers across a variety of styles of movement and music. It’s great fun to watch – and not in the “oh my god, this is a train wreck” kind of way you might at first be fearing. This is because everyone is very committed to the project. No one is approaching their performance from an “oh my god, I can’t dance” standpoint. They’re all giving it their absolute best, and that good-natured attitude comes through. As I said about the preview of “Hi! Hello! Namaste?” and their Bollywood explosion on stage, what they may sometimes lack in precision, they more than make up for in enthusiasm.

Plus, it never hurts to have a couple of ringers in the bunch. On the male side, John Heimbuch actually has modern dance training, while among the females, Katherine Glover has done some burlesque. John has real grace, which he showcases in a two person dance with Tim Uren about fathers and sons, and hey, no fair playing the lost father card. I was trying not to cry. John and Tim do some really effecting work in that sequence (and Matt Nathanson’s “All We Are” as the music pushes all the right buttons on top of that). On the goofier side of the scale, Katherine revived and refined an old routine with Windy’s assistance called “Stir Crazy” that is a very funny burlesque that starts off in multiple layers of winter clothing and goes from there. Can a wool cap, scarf and mittens be sexy? Well, she certainly tries.

Katherine teams up twice with fellow female writers Cole Sarar and Natalie Wass, first making orange caps and folding chairs sexier than they have a right to be, bopping around to Rhianna’s “Shut Up and Drive;” then later trying to reclaim a little personal space to the strains of St. Vincent’s “Rattlesnake” in a piece called #yesallwomen.

Katherine and Natalie kick the whole thing off by coaxing Ben San Del and Kelvin Hatlie out of their chairs and onto their feet until the guys get a “hey look at me I’m dancing!” attitude swinging around to the tune of Queen’s “Crazy Little Thing Called Love.” That’s the blueprint you think the whole show is going to follow, but thanks to Bowlsby and her dancer/writers, the thing keeps surprising you.

Another nice touch is that Windy Bowlsby also acts as mistress of ceremonies, interspersing the different dance pieces with responses from the writers to discussions of dance and writing and theater and art and life in general. They’re all chosen to give context to whatever dance and performers are up next and they’re perfectly crafted introductions. Some of these come complete with Windy’s own imitations of the writers in question, which add to the fun. Unsurprisingly, these running commentaries are thoughtful, pithy, and entertaining in their own right.

In addition to Phillip Low’s turn as Princess Leia in the slave dancing girl outfit from Return of the Jedi, alongside a bemused Ben San Del as Han Solo, Low also does a more serious bit of dancing paired up with Cole Sarar set to the crooning wail of Rufus Wainwright doing “Complainte de la Butte.” Tim Uren, Kelvin Hatlie and Tim Wick channel their inner Gene Kelly wearing fedoras and doing a little soft shoe number while The Dregs sing “Wagon Wheel.”

We even get a couple of writing themed dances – Cole, John and Katherine try “Collaboration” alternately enthused and frustrated by elusive bits of inspiration; John joins the two Tims, Ben, and Kelvin to muddle through “Writer’s Block.” And the whole ensemble gets to wear what they want and boogie down with Windy joining in for the big closing number set to the strains of Janelle Monae’s “Dance Apocalyptic.”

Is Jumpin’ Jack Kerouac the best, most professional dance you’ll see at the Fringe? No, probably not. Is it the most fun? Quite possibly. It also has the side benefit of making me appreciate artfully trained dancers that much more (“Hmmm, maintaining exactly equal distance between more than two dancers in a piece is an acquired skill that’s much harder than it looks, apparently.”) Whether you know any of these artists personally, just know them through their other Fringe shows, or haven’t laid eyes on them before now, Jumpin’ Jack Kerouac is both entertaining, and a nod to the concept that if you set your mind to it, you can do more than you think you can.