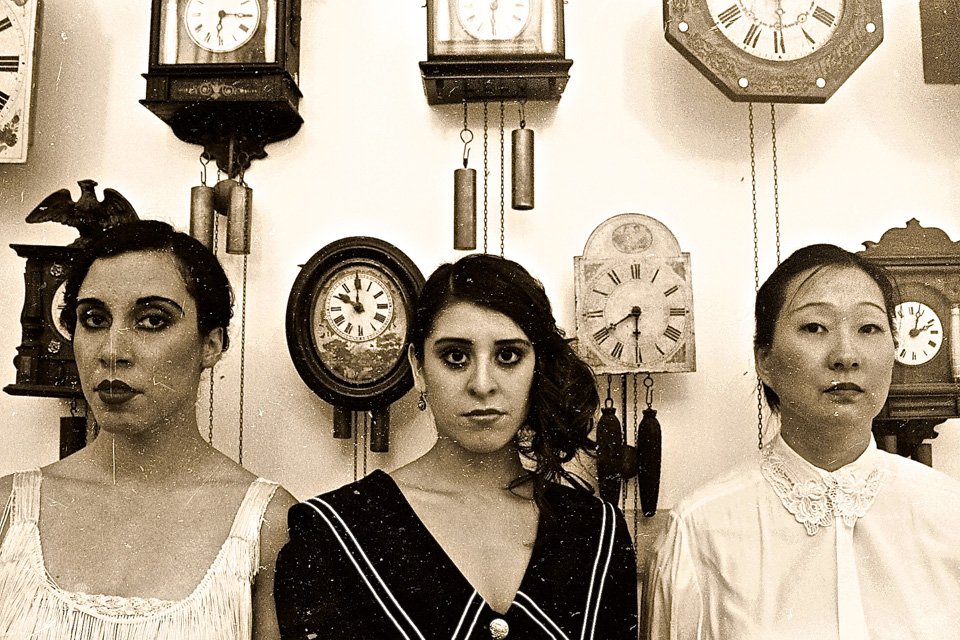 At the time I write this, I’ve seen 38 Fringe shows thus far. When people ask me what shows I recommend, the two that float right to the top are Failure: A Love Story and One Arm. Why Failure: A Love Story? It’s the best script for a show I’ve seen this year. I could sit here and just retype quote after quote from the dialogue that I furiously scribbled down as the show flew along. The best thing to do, though, is to go and see it for yourself.

Failure: A Love Story gets the spoilers out of the way right up front. It’s 1928 and all three of the Fail sisters – flapper Nelly (Emily Madigan), swimmer Jenny June (Andrea San Miguel) and clock shop proprietor Gerty (Su Yoon Ko) – will all soon die. Though their adopted brother John (Sean Dillon) is destined to survive, his animals and his veterinary practice won’t be enough to keep him from feeling lonely. Oddly enough, one man enters their lives and ends up, in his own way, loving them all – Mortimer Mortimer (Nathan Barlow).

All my assumptions about this script, including whether I’d end up disliking it, were completely wrong. Local playwright Philip Dawkins has written a play with such heart and humor and whimsy and poetry that I’m completely jealous. I’m also jealous of the great production treatment he’s received from director Joshua Campbell. The actors in the ensemble, which also include Kim Kivens and Charles Frasier in multiple roles both human and animal, and ukelele playing Revay Henneman as the family gramophone (look it up, youngsters), are all pitch perfect, matching and enhancing the quirky tone of the script and its story.

Ultimately Failure: A Love Story is a play about love in its many forms, family, and how surviving in life, or not surviving, has its own particular challenges. From the opening lines to its closing moments, Failure: A Love Story had me under its spell. Mom looked at me expectantly when it was done, waiting for my opinion. I was still a little stunned, but I managed to get out, “I liked that a whole lot.” She responded, “I’m so glad you liked it, too, because I loved it.” If you haven’t seen Failure: A Love Story yet, you really really should. Then save your program, because hopefully we’ll be hearing a lot from all the people involved in this one again, and soon. It’s a group of artists worth following wherever they go.