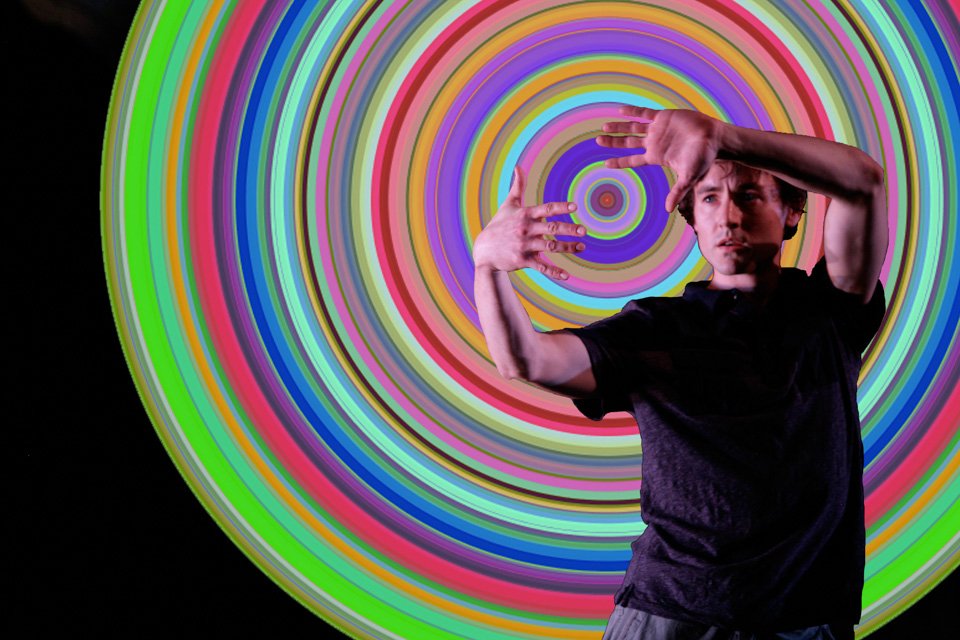 Had I known Connected involved audience participation, I might have stayed away.  As it is, I’m very glad I stumbled into it by accident.  (I’ll admit it, sneaking out wasn’t an option for a couple of reasons – one, Mom wanted to maximize her Ultra Pass so we weren’t going to miss a slot if we were already at a show; two – we were two of only six people in the audience – and one of the six was the artist’s dance partner from their two person dance show Duetted, plus mom moves kind of slow – and there were stairs – so it would have been pretty obvious.)  [I know some people have no problem walking out of shows but I honestly can’t bring myself to do it.  Part of me thinks I’m being disrespectful to the artist who (one assumes) put in a lot of work.  Professional courtesy.  The other part of me is an eternal optimist, hoping that the show will somehow get better, so I hang in there til the end.]

So, audience participation.  OK.  Now I understand Dan Schuchart introducing himself to each member of the audience and shaking hands.  It’s not just that he’s a friendly guy.  It’s not just that he was grateful to the six people who showed up.  He wanted to start establishing a relationship so when he called us out of our seats, we wouldn’t just be nameless strangers sitting in the dark.  Well, the lights pretty much stayed up the whole time so I guess we weren’t in the dark either.

Mom and I enjoyed Connected a whole lot.  It turned out to be a very fun and relaxing show.  A real change of pace.  Mom and one other audience member really couldn’t stand or physically participate for long, but that was OK.  They sat in the front row and Dan found multiple ways to include them in the action anyway.

Connected essentially was a deconstruction of the artist’s process when creating a dance – or, heck, creating anything really.  First we circled up and all clapped once together on cue to get into the same moment together (yes, I know that sounds a little new agey but even with our collective impaired sense of rhythm, it did seem to help.)  We then shook things out and moved into performing a group “happy dance” which consisted of simple arm and leg movements in different combinations – no choreography really, just bouncing around in time to the music, each in our own happy place.

Then, circling up for a group shoulder massage.  Mom was seated so Dan took care of her shoulders.  All the while that was going on, Dan was talking through his process.  Then he showed how one simple movement would evolve into the next ultimately morphing into a little mini-dance.  His grace and control were something to watch.  Later on in the proceedings he did a full on dance routine that was quite mesmerizing.  Throughout the show, Dan encouraged us to feel free to move around the edges of the space and watch the action from a different angle.  Someone even took him up on it to the extent of climbing the stairs into the walkway that runs the perimeter above and around the stage space in the Rarig Xperimental theater.

Talking about patterns and where inspiration comes from, Dan unwound a skein of yellow yarn, running it from one person to another around the circle of people, sometimes shifting the whole circle right or left, sometimes asking people to switch positions but still hang onto their yarn while doing so, creating a different web each time we added to the complexity.  There was also a time to sit down and listen to him share a poem, and a final project building a screen that got hoisted in the air and then served as a place for a projection of ever changing colored concentric circles that we all laid down in the dark and watched for a while.  We also just let out some air and noise while doing so, the sound and energy ebbing and flowing as the calming environment continued to cycle through on the screen.

There were a number of other things the show consisted of, but since I was up and out of my seat, I don’t have the usual detailed notes on this one.

I don’t give out five stars lightly.  And normally audience participation gives me hives.  But in Dan Schuchart’s capable hands, we all had a really nice time just hanging out, loosening up and moving a bit, listening to him talk about art and process, helping build things, and just generally break down the usual audience/performer dynamic.  It was fun, it was different, and I felt like I took a lot away from it.

If you’re looking to step out of the crazy swirl that is Fringe for just 50 minutes or so, this show’s a perfect antidote to Fringe fatigue.  And truly, the guy deserves more than a half dozen people in the house.  Not only would it change the dynamic of the show in interesting ways, what he’s doing with Connected is a treat, a gift.  You’d be silly to pass up receiving it.