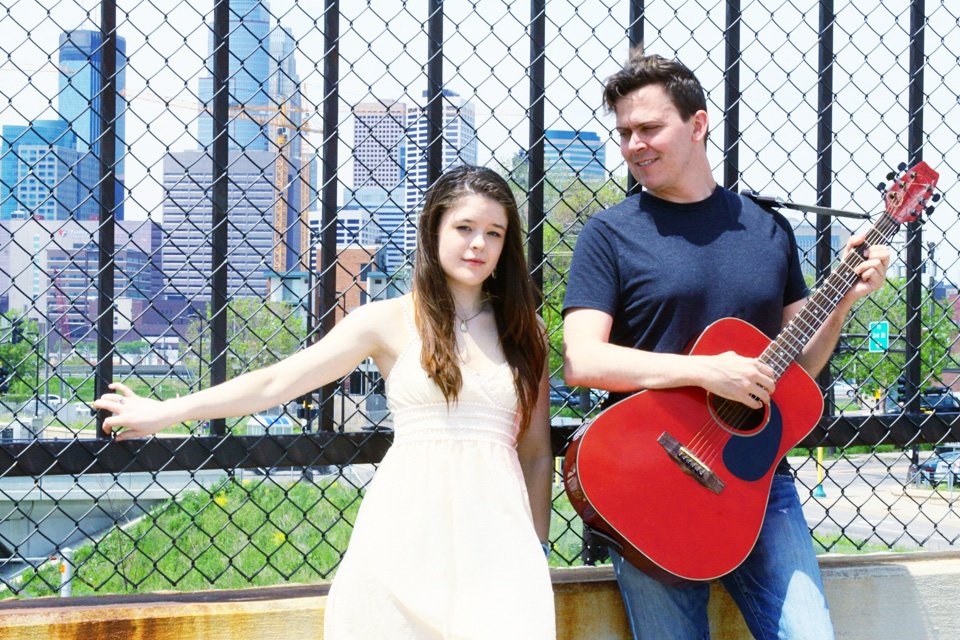 There were also a whole lot of guitars being plucked and strummed over both nights of previews. One showed up in the previously mentioned Tales At Twilight to add a little musical color to the storytelling. Struggling as I am personally to coax some music out of my own guitar, my appreciation for the level of difficulty involved in being a good guitar player has only grown in the past couple of years. I always knew it took nerve to get up on stage and act. Music feels like even greater act of bravery these days. I know I’m not up to it, so my hat’s off to those that are. If you’re looking for some music with a folksy feel, you could take a look at the following:

“Waiting for the cue at the bottom of the page.”

I saw Suburban Cowboy Productions’ last Fringe offering, where the writer/performer twined together the legend of Icarus and the story of his own brother’s unexpected flameout, dying young. The guy puts it all out there for the audience to see. He’s remarkably earnest and genuine. I’m curious to see what story he wants to tell next. His mission to bring his two loves – music and theater – together, is admirable one, one that I hope succeeds.

“A heart so free it needs no place to lodge.”

The music here is complex and interesting. Sometimes it’s a little outside the comfort zone of the performers, but they push through all the same. Staging just for a preview out of context is sometimes hard for shows. A chorus of four waited patiently through nearly the whole preview before they got a chance to join in and sing out. It was worth the wait. The play appears to be mixing modern personal journeys and ancient mythology, and I’m never against that kind of mash-up, so I’m curious.

Into The Unreal City

“This is not our twilight, it’s just the end of the day.”

Hard to tell from this preview. The song was a little on the vague and generic side. Pretty, and pleasant to listen to, but I’m not sure I knew anything more about the people singing it when it was over vs. before it started. The hook for this show, of course, is that it’s one of the genuinely site-specific shows being offered by the Fringe this year. It’s a mini-walking tour of the West Bank area. There are apparently some stairs involved. But they promise to have you back to the Rarig again (where you started) in plenty of time to catch another show. Mom and I planning to give this a go on opening night and see how it works. We were charmed by Mark Sweeney’s original musical last year, and I’ve been intrigued by Gemma Irish’s work as a playwright in past Fringes, so the combo of the two behind this offering is enough to put it on my list. Plus, you know, guitars.

“Sickness, disease and envy flew past on fairy wings.”

A musical retelling of the Pandora’s Box fiasco of ancient mythology, the event which released evil and pestilence into the world. Not exactly happy go lucky musical fare, but a compelling potential narrative. The song sampled and the singer’s voice in the preview were both pluses, and I liked the way it wove spoken narration into the song as well. Not sure exactly how they’re planning to treat the material, but the elements of a potentially good show are there. Worth keeping an eye on, and if, like me, you enjoy the retelling of old tales with modern theatrical tools, then this might be a show for you.