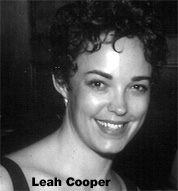 Considering the determination and creativity she’s applied during her six-year tenure, you have to believe that if Minnesota Fringe Festival executive director Leah Cooper reinvented the wheel, it’d actually wind up being rounder.

Not to knock her predecessors, but Cooper has transformed the event from a funky-little-fest-that-could into a juggernaut, and did it without compromising on the art. In fact, she’s increasingly broadened the Fringe’s artistry and steadily got it off life support and on strong financial footing—when’s the last time you heard of art and solvency going hand in hand?

She changed spoken-word participation from a novelty act on the Fringe sidelines into Spoken Word Fringe, which has since become an audience magnet. She instituted Teen Fringe, strengthened the Kid Fringe, included previously ignored spaces like Pillsbury House Theatre and In The Heart of the Beast Mask and Puppet Theatre. She’s attracted high-profile spots like Mixed Blood Theatre and Illusion Theater. There’s more, but you get the idea—the woman has no sense of what it is to leave well enough alone and has made the whole project a lot better for it.

And Cooper is at it again, implementing an idea she got from the Orlando Fringe Festival. The preview event, Fringe-For-All, on June 26, was a hands-down triumph in Minneapolis: The purpose was to get the behinds in the seats so as many people as possible could get a sneak peek, then go home to friends and family and run their mouths about it. And it worked: You couldn’t have gotten any more bodies in the cavernous Theatre de la Jeune Lune digs with a greased shoehorn. Staff had to set up extra rows of chairs and then, in front of that, sit people on the floor. With such a turnout for a mere preview, Cooper and company could conceivably hold the actual Fringe in tents on the playing field at the Metrodome.

The evening presented 30 three-minute excerpts from this year’s shows. And naturally, as with the Fringe itself, the quality varied. Some of the stuff was great (“Mittens for Fat Kids,” “Moment of Life,” “Deviled Eggs”), some of it good (“It’s Hard Being Tall—Blackman Changing Hats,” “Best of the 24-Hour Play Projects,” “The Wacky Chicken Show”) some so-so and a couple of acts that left you counting light fixtures in the ceiling.

“Mittens for Fat Kids” is by a guy named Ben Sandell, billing himself as Leaky Pen Inc. and doing some of the best damned stand-up this side of the big-time. His show, a mix of jokes and storytelling, will cover cute kids, atheism, doomsday and death. The press kit info comes with an advisory: language not suitable for children of any size. He kept it clean as a whistle for the preview and basically gave a clinic on how to keep a crowd completely in stitches with pinpoint timing so sharp it seemed effortless. You may well want to go see this guy a couple of times. At the Acadia Café. Corner of Nicollet and Franklin Aves., Mpls. Sat., Aug. 5 at 8:30 p.m., Sun Aug. 6 at 4 p.m., Tue., Aug. 8 at 5:30 p.m. and Thu., Aug. 10 at 10 p.m.

If you’re the least bit curious about dance, but, like me, always felt you were too dumb to understand, so what’s the point in going, you should check out choreographer/dancer Danielle L. Robinson-Prater’s “Moment of Life” by four members (Robinson-Prater, Jill Hargreaves, Nate Saul, Sara Stevenson) of her ensemble DRP Dance. If you don’t know a pirouette or plié from a pair of pliers, you’ll still be able to appreciate the fluid movement. These performers are so in tune with their bodies, you’ll definitely be in tune with the piece. At the Southern Theater. 1420 Washington Ave., Mpls. Sat., Aug. 5 at 5:30 p.m., Sun., Aug. 6 at 5:30 p.m., Mon., Aug. 7 at 7 p.m., Thu., Aug. 10 at 7 p.m. and Sun., Aug. 13 at 7 p.m.

Four Humours Theatre has a delightfully absurdist premise in “Deviled Eggs.” Satan shows up on Earth and struggles to conceive the antichrist in spite of a crippling case of erectile dysfunction. The four member cast is excellent at underplaying a script laced with dry wit. And there is an absolutely priceless moment that deftly shows just how masturbatory male attention often is toward females. Not recommended for men who can’t enjoy a good joke at their own expense. At U of M Rarig Center Thrust on the University of Minnesota, Twin Cities Campus. Sat., Aug. 5, 8:30 p.m., Mon., Aug.7 at 5:30 p.m., Tue., Aug. 8 at 10 p.m., Sat., Aug. 12 at 10 p.m. and Sun., Aug. 13 at 4 p.m.

Cooper herself has attempted to bow out on the festival for the last two years, but she couldn’t quite tear herself away. This time, though, she won’t be coming back for an encore: applications were being accepted in June. “I’ve stayed on one more year since my prior announcement about leaving,” Cooper reflects, “because we had some trouble in the development area that needed to be addressed and it has been fabulously addressed by Dawn Mori, our marketing and development director of the last two years. So, now things are on very stable ground.” Well, there’s no two ways about it. Her last hurrah at the helm, just from Fringe-For-All alone, stands as one helluva swan song. And I don’t envy whoever comes along behind her, ‘cause they’ve sure got one tough act to follow.