Debuting as part of the Minnesota Fringe Festival, “The Silent Room: A Worker’s Musical” is meant to take the audience on a journey through the labor battle brewing at many of America’s corporate chains. Performances are at the Gremlin Theatre Aug. 5-7, 11 and 13. See www.fringefestival.org for times.

Written by Ted Dewberry, “The Silent Room” is an exposé on the misery of working in a corporate retail workplace. The title comes from the name of a special room at the Twin Cities IKEA where, according to Dewberry, workers are instructed to go if they have a nervous breakdown while working, so that customers will not be able to hear them crying. 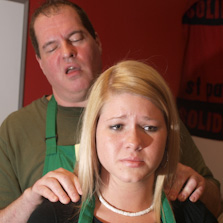 Left: A scene from “The Silent Room: A Worker’s Musical.”

Dewberry was inspired to write the musical after being approached by a Starbucks co-worker about forming a union in their workplace.

Initially reluctant, Dewberry ultimately agreed to come to a meeting just to listen. In the months following that meeting, Dewberry and his co-workers organized against Starbucks’ anti-union advisors and eventually won improved working conditions for their store.

An independent filmmaker in his free time, Dewberry originally wrote “The Silent Room” as a screenplay, but he felt that it didn’t work properly. After that, he tried writing it as straight theatrical drama, but felt that no one would believe the play in that format.

He finally settled on making it a musical because he “needed music as a buffer” to allow the audience to better accept some of the events that take place in the play.

“The songs came from the attempt to make these absurd situations humorous,” Dewberry said.

One song, in which a manager sings about forcing members of his female staff on dates with him, was difficult for Dewberry to write, but he thinks that it works.

There were many times during the writing process that he wanted to give up, Dewberry said.

“Responsibility is high. Retail workers don’t have a voice in corporate America,” he said.

Despite wanting to give up, Dewberry found himself continually getting inspired and eventually finishing the play.

Dewberry knows that his play is not for everyone. “If you’re going to ‘escape,’” he said, “this is the wrong play.”

But he hopes that the audience will pay attention to the people who work retail jobs. “They’re not robots, they’re people,” he said.

Regina Harris is an intern for The Union Advocate, the official publication of the St. Paul Regional Labor Federation.