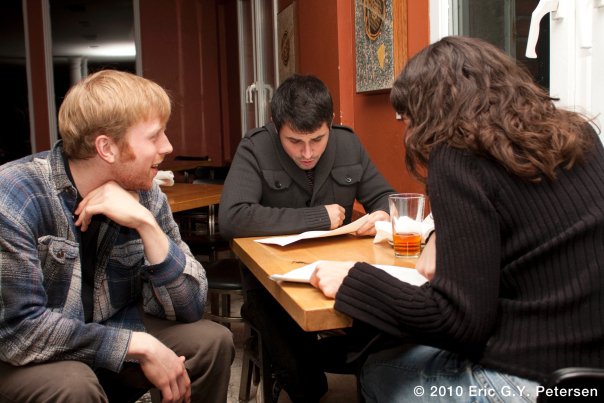 Well, we didn’t get in outright, but we got the next best thing.

Urban Samurai Productions is #5 on the medium-size venue waiting list for the 2011 Minnesota Fringe Festival.

Just need to be patient.

And wait for five other medium-size venue acts to drop out.

The cut off for pulling out of the Fringe and getting your money back is March 15, a little over a month. Most of the big shifts happen by then.

As my friend said to me, “Write that play.”

Already on the way.

This time last year, courtesy of Thirst Theater, “Lonesome, Wild & Blue: or, How To Date A Werewolf” was getting a dry run in front of audiences at Joe’s Garage. That first sequence seemed to go over really well.

“Terry has recently been diagnosed with latent lycanthropy – a carrier of the werewolf virus, which can be spread through sexual contact. In a restaurant, Terry’s date, Robin, reminds them of Terry’s doctor, and a memory of a recent medical appointment. When Robin steps off to the restroom, the waiter arrives. The waiter turns out to be Glenn, the zombie remains of Terry’s former lover, who has some unfinished personal business with Terry. But then, Terry has unfinished personal business with Glenn as well.”

So where does an idea like that come from?

Hence the werewolf. Hence the zombie.

If anyone can get “romantic and bittersweet” out of a werewolf and their now-zombie ex-lover, I’m guessing it’s gonna be me.

Also, because it was for Thirst, I wrote it gender neutral. So once there’s a director, and auditions, they can just choose the three best actors – all women, all men, or some combo of the two. The werewolf’s the werewolf. The zombie’s the zombie. The third actor will play all the other roles swirling around them. It should be fun.

And in many ways a tribute to my late friend, Joe, who laughed at all sorts of inappropriate stuff, and got me to laugh along, and left us way too early.

But hey, no pressure.

Actually, it’s good to be in the thick of it all again. I spend so much time writing about other people’s Fringe offerings, only seems fair to put myself out there, subject to the public gaze and judgments, too.

The seed of it started right after the 2009 Fringe. Right now, it starts with this scene, and this scene. There’s a little video of it as part of a 3-Minute Egg profile on the Thirst site.

It’s already gone to some other interesting places in other scenes I’ve been noodling around with over the past year or so. Time to start putting the pieces together.

Even if the Fringe wait list somehow doesn’t come through, I’ll still get a play out of it. Which is always a good thing.