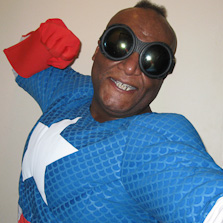 There’s a fellow Fringer I know who prides themselves on getting their whole schedule locked down before the first Fringe-For-All even happens. Sure there are other previews in advance, and this person sees a lot of theater and knows a lot of theater artists. So maybe their Fringe schedule is a no-brainer. But one of the things I love about Fringe is the spontaneity, and the joy of being surprised by someone who comes out of nowhere and their preview just says, “You need to see me.”

That happened three times for me at the first Fringe-For-All this year. One of those times was the preview for

First, you’ve got a big guy with a tiny little haircut. Then you’ve got an electric guitar, with a funky mini-amp. The performer then says that the following song will be “full of conjecture but completely devoid of opinion.” The song was so odd, and the refrain so catchy, that we couldn’t help ourselves. A couple of people were moved to sing along to the little ditty, and once that happens, the floodgates open. Once one or two people feel confident enough to sing out loud, the rest of the audience gets permission. Timid though we be, I think you can still hear us begin to sing along at the end (prompting Fringe Executive Director Robin Gillette to say the thing that gave me the title for this blog post)

Come on, everyone. Sing along!

“There are no chicken wings in heaven

It’s not often I have that much fun in a preview, so that promises good things. Plus, he has Mahmoud Hakima in his cast (#5 on my Top 10 list last year, and a favorite of both Mom and me) I think I’m gonna check this one out.

“Do you sound white on the phone? This and other complicated questions can only be answered by this hilarious send-up of social and racial attitudes and how they ‘color’ our world. Can these things be solved in less than an hour? We’ll see.

Uncle Tom’s Condo uses the opportunity of live stage to advance the emotional resonace of our country’s ongoing struggle with racial, gender, and now, sexual equality. Greg Nesbitt has assembled a diverse cast including Mark Beck, Jo Mary Fahey, Mahmoud Hakima and Kirsten Stevens to steer us through some confusing history and hopefully into an understanding future. America is currently replete with racial tension, even though we are supposed to be over that by now. Is is systematic? Is is personal? Often, humor is the best way to approach such delicate subjects.

Is your identity more important than your race? Who makes that decision? Everyone is affected by outside forces at one time or another, and if it is something other than a natural disaster, it’s okay to wonder if it’s coincidence or malicious. Just because you’re labeled as disgruntled doesn’t mean you don’t have the facts!”