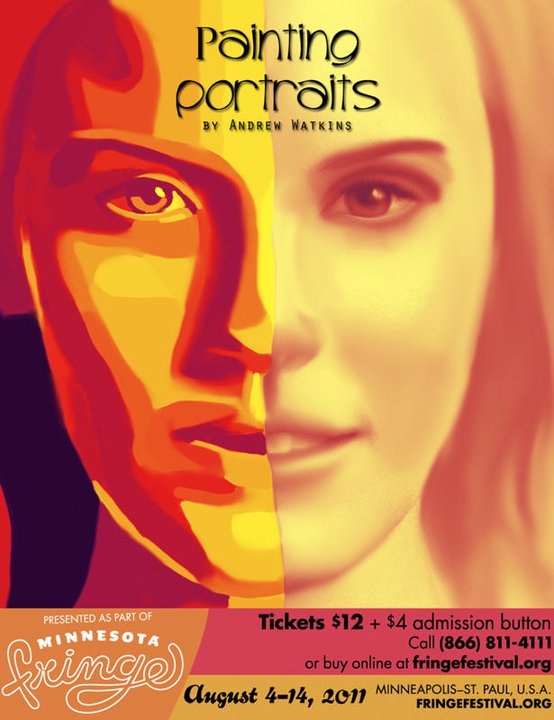 If you removed the gun from my head and I could see an additional ten Fringe shows, what would they be and why?

“Long absent realist painter, Anthony, returns home to his sister after losing faith in his work. His passion is rekindled after being introduced to Tom, another faithless painter with an opposing painting style. The two disparate painters regain inspiration and spark conflict when they decide to continue to work under each other’s names.”

This one’s tricky for me because I normally dislike art about artists. The fact that the artists in question here are two painters helps a lot I think. (Nothing more boring to me than a writer writing about writing with a writer as their protagonist. Write *about* something, please.)

I’ve been talking to the playwright/producer Andrew Watkins about this one and also had a chance to read the script and more than anything, I’m really curious about how it’s going to be staged, not just within the confines of the Fringe but how you stage something like this *period*. Because a lot is riding on those paintings. The sample used in their Fringe-For-All preview last week was an interesting tease. The creative act is also supposed to transpire onstage at one point, which has me fascinated. In addition, and you can hear some of this in the video of their preview…

There is a fair amount of very deliberate repetition in the script. People say the same things, or repeat something someone else has said, on a regular basis. So it’s a deliberate choice on the part of the playwright, and a tricky thing for the actors and directors to handle. Something new has to come out of those oft-repeated words each time. There needs to be variety to the rhythm and flow of the text in performance. I enjoy the challenge of that, and the different choice of how to attack a play.

Back in the 2008 Fringe, Mike Matson was part of an ensemble of young actors putting on Rachel Rieva’s endearing play “Love and Video Games” (boy meets boy thanks to matchmaking ghost). Flashforward and now we have Mike as Anthony in this play. And Mike in that preview scene was interesting to watch because the way he looked at that painting, the result of someone else doing something he very much wanted to do, but was unable to do, spoke volumes. His character Anthony looked like he was literally in love with that painting. He was connecting with a piece of artwork in a way he seemed incapable of doing with another human being, his sister.

I missed Watkins’ first Fringe show last year, writing and directing Digging A Hole. It looks like it was well-received – 4-1/2 kitties out of 5, with only 2 of those reviews written by people with the last name Watkins. The range of response from the audience indicates that he’s a writer that keeps challenging both himself and his audience.

All of which has me intrigued. Which is a good place to start.