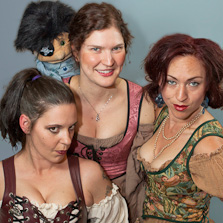 If you removed the gun from my head and I could see an additional ten Fringe shows, what would they be and why?

I suppose I could be sneaky and just grandfather this one in, since playwright Dan Pinkerton and I produced the short play showcase Fast Fringe together along with Roy Close back in the 2004 Fringe, but that showcase didn’t really put Dan’s work on full display. We were mostly showcasing the work of other writers.

Plus, this is a musical written with fellow friend, composer Chris Gennaula (husband of intrepid fellow blogger Wendy). These guys deserve their own shout-out on the list. They are a must-see for Mom as well.

Rosie Bustle, owner of the Inn & Out Cyril

Billy Silverhook, a vicious pirate with a secret

— and a host of others, plus all the extras!

Still think “But it’s got a puppet, it must be OK for kids, right?”

Fun, yes, but not for the whole family. I’ve seen enough of Dan’s writing to know that when he lets loose on a fun idea like this, I’ll be using the word “naughty” an awful lot in describing it afterward. The phrase “double entendre” is probably also in for a workout. And double may be understating the case.

I also know two of the lusty, busty pirates in question – Lisa Bol, and Dan’s daughter Ariel Pinkerton Leaf. Both are big fans and supporters of Fringe and shoestring scrappy theater in general. Ariel’s also a writer, director, lighting designer. Lisa constantly volunteers her time to help read and develop local playwrights’ new work. How could I not support them in return, right?