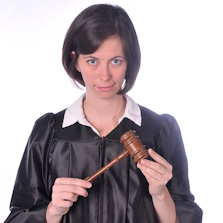 If you removed the gun from my head and I could see ten additional Fringe shows, what would they be in and why?

Like Uncle Tom’s Condo, SCOTUS! is another show that sort of snuck up on my sideways at the first Fringe-For-All. I wrote previously all about how the playwright doing the preview charmed and entertained me, making a damn fine spokeswoman for her play, so you can read that post here.

That’s enough to get me in the door. In fact, Mom and I are going tonight. I’ll report back…