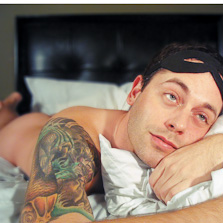 If you held a gun to my head and I could only see ten Fringe shows, what would they be and why?

“A hilarious mix of stand-up comedy, storytelling and music about a gay man looking back over the greatest loves (and sex) of his life. Features original music from Kevin J Thornton’s new release.”

This is how you know you’ve developed an instant Fringe crush.

and in addition to the obvious “Hell, yeah” response that forms in your head, you also find yourself feeling slightly giddy. Why is she asking? Oh wow, perhaps she knows him and this is a prelude to her trying to set the two of us up while he’s in town. That’s what married people do with their gay friends all the time, right?

No, no, silly man. She’s only asking for confirmation. She wanted to make sure she wasn’t alone in thinking that. No, definitely not alone in that regard. Take a number, get in line. “We seem to have similar taste in men, so…” she continued. (This is true. Noah Bremer still has a restraining order out on both of us.) Mom concurs with my friend and I as well.

I mean, c’mon, just watch the trailer. The guy’s funny.

He’s doing a circuit of ten Fringe Festivals this year, so he’s also clearly insane. But he’s been racking up the audience favorite awards and killer reviews all over the country (including the description “a really gay, obscene Prairie Home Companion”), so he must be doing something right.

Normally, the theater of “these are all the losers I slept with” isn’t a home run for me, but there’s just something about the guy. He was reading notes off of a piece of paper taped to his guitar, and admitted as much. Then he went off on a tangent about said guitar (warning us that tangents would be par for the course come showtime). The guitar was something he found in mint condition just sitting in his grandfather’s closet, when they went to clean out the man’s house after he died. With the receipt for the purchase, back in the 1950s, tucked behind the strings in the neck of the instrument. “I know that talking about my dead grandfather onstage is extremely manipulative. But whatever gets you in the theater…”

This one’s on the shortlist for opening weekend.