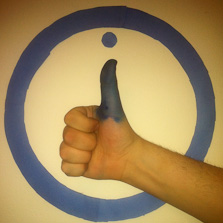 If you held a gun to my head and I could only see ten Fringe shows, what would they be and why?

When two stoners accidentally create a religion, can they harness the power of social media to convince the world to take it easy—or will it all go up in smoke? A musical satire of biblical proportions!

I have to admit, given the show description above, I thought it was sort of an odd choice to go with an ode to Walmart as their Fringe preview at Fringe-For-All last week.

Entertaining, yes. And damn, way to cram 10 people and a multitude of props onstage, do a musical number and get it all in in under two and a half minutes. Very impressive. Plus, they had all those props in their shopping carts, flung them around the stage to set up, then speedily retrieved them when they were done, clearing the way for the next act. I appreciate the stagecraft.

“…wonder of the ever-beating capitalistic heart…”

The main thing drawing me to this, however, is that the book, music and lyrics are written by Izzy Waid. Back in Fringe 2007, he was one of the masterminds behind The Patriot Actors in the Most All-Americanest Sketch Comedy Show Ever. Terrorism, jingoism, racism, abortion, mentally challenged people; sexual, physical, & emotional abuse. Live action, video, and some fascinating crossovers between the two. They tackled it all and then some in a show so horrifically inappropriate that I almost hated myself for laughing. But I kept laughing, and laughing, and laughing. Read my full review if you don’t believe me… It was a ramshackle, scatter-brained, warning shot along the bow of the Fringe Festival. And now, four years later, he’s baaaaack…

If Izzy and company can wrangle with all that back then, imagine what a single coherent plotline, a big dose of religion and drug use, and a musical theater framework can do for these folks.

I’m trying not to get my hopes too high, (or oversell the thing) but after that first crazy Fringe show of theirs, I kind of can’t help myself.