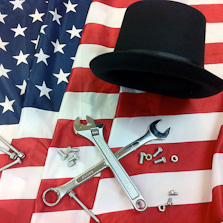 If you held a gun to my head and told me I could only see ten Fringe shows, what would they be, and why?

#1 – Robot Lincoln: The Revengeance (The Musical)

This play is so deeply, deeply wrong, on so many levels, I can’t help myself.

“After Abraham Lincoln’s tragic death, John Wilkes Booth sets out to create a doomsday machine to take over the world. The mad scientist Uncle Sam revives Lincoln as a robot to stop him and save America!”

Just from the title, this thing has been a guilty pleasure for me for weeks now.

But I was shy about being too hopeful, even with the expanded description on the Fringe website…

“Robot Lincoln: The Revengeance is a quirky, satirical musical comedy that is part sci-fi, part steam punk, part action adventure, part buddy movie, and all spoof. In this deliberately inaccurate retelling of Abraham Lincoln and John Wilkes Booth’s relationship, Booth assassinates Lincoln, who is revived as a robot. Lincoln is sent to stop Booth, whose insanity has driven him to try to destroy the world. But when an unexpected enemy bursts into their conflict and presents an even greater threat, can the two enemies come to a mutual understanding, resolve their differences and unite to save the world?

Mary Todd Lincoln wanders through the show, as do several presidents (all robots) from various periods of American history, as well as sundry historical characters performing in a plauditory pastiche of musical styles. If you don’t think about it too hard, you’ll have a wild and wacky time.”

And then, they performed at the Out of Towners Showcase last night.

They had a few brief lines together, and then the music kicked in.

A song of forbidden love between an assassin, and the president he shot in the head.

“I take your hand, your robot hand…”

A classic old-school musical theater ballad, as sung (and danced) by John Wilkes Booth and the revived robotic corpse of Abraham Lincoln.

These people have a sick, sick sense of humor.

And I can’t wait to see the rest of the show.