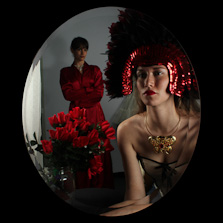 A Little Bit of Vegas

“It’s 1958. Sensual showgirls are all the rage on the strip. High glamour and soft mystique allure and captivate a true gentleman into the passionate world of a woman willing to risk everything to reach the top.”

A young woman (they have a cast of 18, so I have no clue which young woman but that’s not really necessary to understand the preview) emerged from backstage with a red and black feathered/sequined headdress on her head, covered in a silky bright red robe. She took the microphone from Robin Gillette after the show introduction, and got ready to belt out her big torch song number “Don’t Rescue Me” (basically, don’t save me from my “bad” impulses, I want to live in a big way).

She opened her robe, let it fall from her shoulders and tossed it to the side and…

The young lady was standing there in a skimpy black bikini accented with butterflies and I’m thinking, “Hmmm, I’m sure if I were a straight guy this would totally do it for me but… huh… nuthin'”

I did appreciate her voice, quite a lot. In fact, she didn’t even need the microphone. At times she overwhelmed it. She had a voice big enough to fill the whole room all by herself, well before the “big finish” notes at the end. All this bodes well for the show. If the other performers in it are this good, or even half this good, should be an interesting production. Can’t speak to the quality of the script or story or anything, we just got a song here. But it was a damn good song, done well. It was a solid way to kick off the evening. She even got done while the warning light was still in green mode, inside the initial two and a half minute mark. Most efficient.

Will I be seeing this show personally? Probably not. I think I am very much not its audience. It strikes me as a very hetero show (and since the Fringe audience can very well be 90 percent hetero, this is a good thing – for both show and audience). I have just never felt less heterosexual watching something in a long time. It was a most odd feeling. And an interesting way to kick off my Fringe season – and scheduling plans.