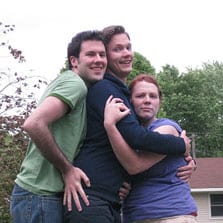 Big surprise. We’re all biased. But if I have to be ruthless in order to whittle down the list of Fringe offerings, even in a limited radius, to an actual schedule of only four shows on a weeknight or seven on a weekend, something’s gotta guide me. So if you wonder, “Why don’t I see more of *blahblahblah* on his schedule with his Mom?” it may be due to one of the following.

I’m going to gravitate toward the new work. Yes, all Fringe shows are new, but some are newer than others. If it’s a new play, based on someone’s personal take of a new idea, I’m going to incline more in that direction that a re-hash of – for instance – Shakespeare or fairy tales (and there are a clusterf**k of both varieties of that this year). If it’s an established script of quality that I haven’t seen, I might go with that, but otherwise, I’m gonna go for the stuff that’s fresh off the printer, for better or worse.

I don’t get to see my life or that of my tribe reflected on stage all that much the rest of the year. It’s why I write. The stories aren’t being told, so someone’s got to tell them. I also want to see what other people are doing with the subject matter. So, gay content, big plus.

This is sort of an extrapolation of the “I’m gay” thing but is its own special brand of weakness. The Fringe is lousy with theater artists who are just making their way in the world, and those who have aged far more gracefully than the bulk of the general population. And, many of them being actors, it’s often part of their job to be, well, prettier than me. I can pass a Fringe hour in a fairly easy fashion if I have something nice to look at. Not a prerequisite, but definitely a bonus. Plus, Mom likes the cute guys, too. But even a cute guy can’t get me to sit through a show I’m convinced will be painfully dull. So looks only get you so far.

I am the son of two ordained ministers, one of whom is Fringing with me this first week. Spiritual subject matter of all stripes surfaces in my work fairly regularly. Ghosts and the afterlife quite literally haunt my laptop. So if someone’s tackling religion from a place of intelligence and respect, that also earns major points.

If you’ve got all four of the above (like, for instance, Ex-Gays from Savage Umbrella which I saw in its more expanded version just last month), you’re probably getting a visit. If you’ve got one, or a combo platter of two or three, trust me when I say you already have my attention.

Now I’ve just got to get the scheduling gods and the road construction demons to cooperate.